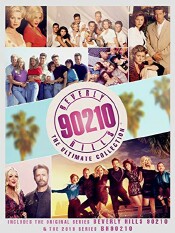 Ah, good old 1990’s, such important years in our history. The Soviet Union was in a state of social and political upheaval, David Robinson had just taken the professional basketball world by storm, and I was hatching plans for my first double-digits birthday. Oh yeah, and Beverly Hills, 90210 hit the airwaves for its inaugural season. Obviously, at the time I was a bit young to have been interested in this teen soap opera, so watching the DVD set has not be full of reminiscence for me. Instead, it’s been like discovering for the first time what 1990 could have been like, had I been a beautiful, spoiled-rich teen living in Beverly Hills. My three biggest regrets about missing out on 90210? I could have looked back now and laughed about the bad hair, bad clothes and bad music that I thought were so cool back in the day. Actually, I did laugh at that stuff, but surely not as heartily as I would have, had I been an old-school 90210 fan.

If I was old-school, I would know the story by heart. It’s about a bunch of abnormally attractive teens living the high life in Beverly Hills, while dealing with the universal issues of high school existence. Fraternal twins Brandon (Jason Priestly) and Brenda (Shannon Doherty) are the central characters in this first season, supported by spoiled Kelly (Jennie Garth), macho Steve (Ian Ziering), brainy Andrea (Gabrielle Carteris), bad-boy Dylan (Luke Perry) and David (Brian Austin Green), the cheeky freshman. Also, the twins’ parents (Carol Potter and James Eckhouse) play somewhat significant roles here, though as the show evolved, the parents were less and less involved.

Given the universal and relatively timeless nature of high school drama, the show has aged fairly well. Of course, you can’t help but laugh at transient aspects like the fashion, but chances are you’ll find plenty in common with these uncommon kids as they struggle to fit in, find themselves, and get entangled in complex relationships.

This series ran for 10 years, and evolved over that time, as the kids graduated high school, entered college, and then arrived in the real world. Over those years, 90210 addressed some difficult issues, including alcoholism, rape, teen pregnancy, and drug abuse. If you followed the series through all of its drama, you may find yourself surprised at the sweet nature of the show. Life wasn’t quite so tough in the beginning, and that’s not a bad thing. There’re still lots of heartbreak and entertainment here, and the sweetness may even fit better with the wow, they’re so young!

Many of the young cast members have gone on to other things, but none of them bigger. Luke Perry was riding high on the CW’s new Archie Comics show called Riverdale when he suddenly passed away from a stroke in 2019. He had a pretty full career in those few remaining years and is one of the more memorable actors and characters from this show. Shannon Doherty had a good run on the original Charmed, but talk of her difficulty to get along has hurt her career somewhat and led to a very public exit from Charmed. It must have already been starting back in 1993, because she admonishes her fans not to believe anything they hear about her, and that none of it’s true. Jason Priestley would have a career both in front of and behind the camera as a pretty prolific director. His acting credits include Calendar Girl and Tombstone. Jennie Garth hasn’t done a ton of work since then, but she appeared in several rebirths of Beverly Hills 90210. Ian Ziering was recently in The Swamp Thing television series and a few of the Sharknado films. Brian Austin Green had long-running characters on Anger Management and Desperate Housewives. Tori Spelling ended up in several short-lived shows including Mystery Girl where she teamed up again with Jennie Garth. Creator Darren Star had even more success with Sex And The City, another show he created.

You already know whether you want to buy Beverly Hills, 90210: The Ultimate Collection. Either you love it or can’t stand to be near it. Well, the syndication factor may also be a consideration, as you can probably still find this show on a channel or three in your area. But that won’t let you relive the good times at your own pace, or even discover the show for the first time right from the pilot on. That’s the magic of this great set from CBS. Let me tell you what you’ll be getting here:

We’re talking 74 discs. You get the complete 10 seasons of the original series. That’s 292 episodes plus all of the extras that came with those original releases. You also get the short-lived, more recent series BH90210. There’s only a short season, but it allows you to have it all in one place. Bonus extras for the Complete Series include a 1993 Behind The Scenes feature that talked with the main actors at the end of their important third season. That’s when they graduated high school. There’s a full-length 2003 reunion show. There’s A Look Back With Darren Star and plenty of things like Gag Reels and A Final Goodbye.

Again you have to give CBS credit for once again putting together a super collection that fan will be happy to own. But once again the discs are held in plastic cases (3) with those overlapping discs. Discs are always falling out and getting scratched. Do what I do and buy some slip-sleeve albums to keep your discs safe.