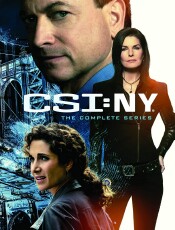 It’s been a while since a CSI episode has crossed our paths. For nearly 20 years the franchise would be one of the top-rated dramas on television. It all started with the original CSI: Crime Scene Investigation. This Las Vegas show became an instant hit, and three years later we found ourselves in Miami for a spin-off. Two years after basking in the Florida sunshine, Jerry Bruckheimer caught lightning a third time; this time out New York would serve as the setting. While there are ties that bind the three shows to the CSI franchise, each show has a unique style. The cases also serve to distinguish the shows from one another. The leads for the three shows likely give the most character to the series. Gary Sinise as Detective Mac Taylor brings a strength that establishes this show’s credibility from episode one. Taylor is ex-military who lost his wife in the 9/11 attacks. He’s incredibly driven and passionate about bringing down the bad guys, but won’t allow his integrity or that of his lab to be compromised. Also the New York show differs from the original in that the CSI personnel are full-fledged cops and not just lab rats working for them. I find I like this version far better than the Miami setting, even though I can relate more to the Florida locations essentially in my own back yard.

The show does share some of the qualities that have become traditional essentials for the CSI franchise. Each opens with a song from The Who. I was bummed to hear that the original selection for New York was Behind Blue Eyes, one of my favorite Townsend compositions. It would have been a far better selection. New York has the same narrative style, which usually allows for an “A” crime and a “B” crime. The mandatory lab montages are intact, as are the CGI recreations of some of the internal body demonstrations. The show, like the others, focuses on the CSI team. Beyond Mac Taylor, the team includes Detective Stella Bonasara (Kanakaredes), who has a dynamic symbiotic relationship with Taylor. They are usually teamed together, and there is great chemistry there without it needing to involve romantic attraction. Detective Danny Messer (Giovinazzo) is all New York from the accent to his habits. He’s the kind of tough, no-nonsense New Yorker from an ethnic Italian hood who, you get a sense, could have just as easily gone the other way in the world of real-life cops and robbers. Dr. Hawkes (Harper) started the series as the medical examiner but now works as a CSI detective. Detective Monroe (Belknap), often called Montana, is a country girl adjusting to the big city. Messer often looks after her like a sister, and these two have developed another of the show’s good character chemistries together.

There were some cast changes toward the end of the run, but this show contained the most stable cast of the entire franchise. That may be why it tended to be my favorite. The cases are uniquely New York. The city’s plethora of eclectic cultures provide a wealth of material for the writers to mine. The characters are usually based on real people like the unlikely Suicide Girls found here in the third year. From grocery store cart races to the world of fine art, the city and its people play a huge part in each episode. There have been many shows based in New York over the years. NYPD Blue and the Law and Order franchise have been the most successful, but they never seem to make the city as much a part of the stories as CSI has done here. These elements taken together have allowed for a series that has the best of the CSI franchise, but enough independent identity to remain fresh. This was a solid show with a solid cast and crew.

So here we are several years after the show left the scene and left the original as the last show standing. Of course, that came to an end as well. Now it’s coming back with many of the original characters returning for a “revival” series. Details aren’t many yet, but it’s clear that CBS wants you to get back into the CSI mood. That’s why they are releasing this complete series sets. This is a massive 55-disc set. It contains all of the extras from each of the original season releases. That’s over nine hours of bonus material. The collection comes in a box with three plastic containers. I don’t like these overlapping disc setups. CBS does a great job of putting together more of these full collections than any other studio. They deserve a ton of credit for making the space on our shelves more efficient and getting these all together. But I really hate these cases and end up storing the discs in album sleeves to better protect them for the years to come.

It’ll take you 142 hours to get through the series. Now that’s some serious binge-watching. I think you’ll enjoy every minute of it. Too many shows just ended up looking contrived or forced because corners had to be cut. With CSI: New York, it’s like it was just yesterday.  Solid stories. Compelling performances…”Nothing fake about that.”

Gino Sassani is a member of the Southeastern Film Critic's Association (SEFCA). He is a film and television critic based in Tampa, Florida. He's also the Senior Editor here at Upcomingdiscs. Gino started reviewing films in the early 1990's as a segment of his local television show Focus. He's an award-winning recording artist for Omega Records. Gino is currently working on his 8th album Merchants & Mercenaries. Gino took over Upcomingdiscs Dec 1, 2008. He works out of a home theater he calls The Reel World. Favorite films: The Godfather, The Godfather Part II, The Body Snatcher (Val Lewton film with Karloff and Lugosi, not the pod people film), Unforgiven, Gladiator, The Lion King, Jaws, Son Of Frankenstein, The Good, The Bad And The Ugly, and Monsters, Inc.
Beverly Hills 90210: The Ultimate Collection Star Trek: Lower Decks – Season One