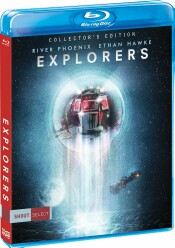 “If this is all a dream, what’s gonna happen when we wake up?”

If you look at the stats, it would be so easy to conclude that Joe Dante’s 1985 film Explorers was a complete dud. The film cost a little over 25 million dollars and raked in less than 10 million dollars. It didn’t last very long in the theaters, and one might conclude that’s the end of that story. But one would be quite wrong. Since the day I first saw it at the theaters during its short run, it has remained one of my favorite films of all time. Looking at the stats might keep you from giving this old gem a try, but you would be missing one of the most heartfelt films of the last 35 years. It’s one of those films that the studios still don’t have much faith in, so it hasn’t been released with any kind of frequency or care. For years I relied on my laserdisc copy. Shout Factory has a habit of unearthing little diamonds in the rough like this one. They get the home entertainment distribution rights. Film some new interviews and release it, hopeful that there is more of an appreciative audience out there than any other studio believes. I don’t know what kind of audience this Blu-ray release will find, but I’m grateful it’s here on Blu-ray and I can add a good transfer of the film. I think you will be, too, if you can avoid looking at the stats.

Ethan Hawke got his first acting gig here as Ben. Ben’s a bit of an awkward pre-teen who loves science fiction and hopes one day to explore space as an astronaut. He begins to have these crazy dreams that he’s flying over a landscape of odd shapes and designs. He draws some of what he sees and presents them to his only real friend, Wolfgang, played by the late River Phoenix. Wolfgang is also socially awkward, but for him it’s not science fiction, but actual science. His parents are German scientists, and he’s allowed his own laboratory space in the family basement. There he attempts to build the circuits he has identified from Ben’s dreams. He realizes it’s something that can actually be built. The group of friends welcomes newcomer Darren, played by Jason Presson. He’s a bit of a loner who stands up to bullies who are tormenting Ben. His family life is made up of a drunk father and impending poverty. He reluctantly embraces Ben and Wolfgang when he sees what Ben’s dreams have created.

They discover that it creates a spherical energy force that ends up ripping through Wolfgang’s lab creating a lot of perfectly round holes in books, furniture, and even concrete walls. He eventually realizes he can control the size and movement of the sphere. The next step is building some kind of a ship that can be enveloped by the sphere, and with the aid of some eclectic building around an old junked tilt-a-whirl car, they create a ship they christen The Thunder Road. The first test brings havoc to their small community, where they trash the local drive-in theater, causing UFO reports that attract the interest of a local police officer/chopper pilot, played by Dante’s good-luck charm, Dick Miller. They also realize there isn’t enough air in a portable tank to last very long, and something attempted to take control of the ship. To discover what this all means, they would need air. The next dream, this time shared, delivers more designs. This time for an air generator. Now they are ready to find out who or what has been communicating with them and why.

This last act is where the film falls apart. They do end up meeting aliens, but they are obsessed with old radio and television broadcasts to the point it’s the only way they know how to talk with earthmen. This devolves, and the aliens’ true nature ends up a disappointment to characters and audience members. It ends up Looney Tunes silly, and for many it ruins the film completely.

It didn’t ruin the film for me. The basic idea was actually quite clever. It was the execution that leaves the film flawed. I actually got to speak to Joe Dante about that film, and you really can’t fault him for how it came out. Paramount was in a hurry to meet an imaginary release date, which would have been difficult enough. But as they were finishing the ending, the studio moved up the date and ordered production literally halted immediately. What was left wasn’t exactly what the filmmakers had in mind, and it leaves me less frustrated with what is there and more sad that I’ll never get to see what the ending would actually have been should Dante and his crew been given the time and resources to finish what they started. But even with the flawed ending, this remains a film with wonderful characters and moments and enough still there to fill the heart of an eternal teen who would love to see what’s out there. I was these kids. I just never got the chance to build my very own spaceship.

The film appears to have been cursed in other ways as well. It’s well known that one of the stars River Phoenix had a great career ahead of him. While writing Titanic, it was River who James Cameron saw in the lead role of Jack. He was also preparing to star in Interview With A Vampire in the role eventually played by Christian Slater. But those things were not meant to be. River died of a morphine drug overdose in 1993. But he wasn’t alone in that tragic end. Amanda Peterson, who played Lori, an undeveloped romantic interest for Ben, would years later also die of a morphine overdose. It wasn’t unlucky for Ethan Hawke, and while he got beat out for a role in Stand By Me by none other than River Phoenix, he has gone on to become quite a big star with several notable roles and films under his belt.

The release includes both the theatrical and home video versions of the film. Not much different. Just about three minutes added for the more recent releases. They are on separate Blu-ray discs with the extras imported from previous releases. Deleted scenes and a few new interviews. There’s also a making-of extra here.

“You don’t need a driver’s license to reach the stars.”

Any fan of Joe Dante’s won’t be surprised by all of the loving references to classic horror and science fiction film history. I won’t even try to list them here, but Dante is a fan, and all of his films are in some way love letters to all of his fellow fans in the world. It’s become as much of a signature element of his films as Dick Miller. Those kinds of things bring a tremendous amount of heart to his films and make his work so distinctive. Don’t get me wrong. He’s not copying the classics. His ideas are as original as they come, but his films carry little shout-outs to those memories. Going to see a film by Dante always makes me want to be a kid again. “I haven’t had dreams like this since I was a kid”.

Gino Sassani is a member of the Southeastern Film Critic's Association (SEFCA). He is a film and television critic based in Tampa, Florida. He's also the Senior Editor here at Upcomingdiscs. Gino started reviewing films in the early 1990's as a segment of his local television show Focus. He's an award-winning recording artist for Omega Records. Gino is currently working on his 8th album Merchants & Mercenaries. Gino took over Upcomingdiscs Dec 1, 2008. He works out of a home theater he calls The Reel World. Favorite films: The Godfather, The Godfather Part II, The Body Snatcher (Val Lewton film with Karloff and Lugosi, not the pod people film), Unforgiven, Gladiator, The Lion King, Jaws, Son Of Frankenstein, The Good, The Bad And The Ugly, and Monsters, Inc.
Exclusive Interview With Michael Starr & Michelle Talbert, Director and Producer of It’s In The Blood: The Origins Of The Chattanooga Racing Circuit MacGyver: Season 4 (2020)