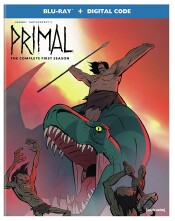 It is a tall order to create a compelling television series with virtually no dialog. However, Genndy Tartakovsky’s Primal fills that order. Then again, what would you expect from the creator of such entertaining animated series as Dexter’s Laboratory, Samurai Jack, and Star Wars: The Clone Wars. This time around Tartakovsky tackles the prehistoric period with this series that follows a caveman and a Tyrannosaurus that were bonded by grief. As unrealistic as the pairing sounds, the themes of the series make it quality television. Normally, I’m not one for shows with minimal dialog; in this series, its absence makes the artwork and storylines resonate deeper as extra time and care was taken to convey the plot’s significance. Of particular intrigue is that fact that though the series is a work of fantasy, all the animals depicted are based on real prehistoric animals.

As expected, the pilot sets up the rest of the series. Spear (as he is referred to in the production notes), a caveman, barely survives an encounter with a Deinosuchus (extinct ancestor of the crocodile) while fishing for his family. This was actually the moment that hooked me, as I was caught completely off guard by the Deinosuchus appearance. In truth, I was starting to get the sense that I wouldn’t be interested in the show beyond this review, and at that exact moment of my disinterest, the beast sprang out of the water, making me jump back. Sorry to spoil that bit for anyone, but I felt it was important for you to grasp my frame a mind before we continued. Surprisingly, the eerie calm is what made this scene so great. Needless to say, from then on I was hooked, and given that this sequence occurs in the first two minutes, that is a significant accomplishment for the series.

The show keeps things moving, as it is not long after that grief strikes when Spear falls into a deep depression. As an Adult Swim series, it goes without saying that Primal is not for children. This is evident by the adult themes that are depicted throughout the first season. To the point, depression is a key theme for the first episode, as well as grief, which is the emotion that bonds our two protagonists together. I don’t want to give too much away, but just know that heavy loss is the reason for the unlikely pairing between our cavemean and our Tyrannosaurus (which production notes identify as Fang). Now, this doesn’t make for smooth sailing. Our pair may be bonded, but they are both alphas, and this attribute creates a lot of the strain between our characters, as neither is keen to bend to the other’s will. This is shown very clearly in the second episode (River of Snakes), as well as several times later on in the season. For me this was a vital element of the season. It helped to further the stories and led to another important element: the camaraderie.

You see, while they often disagreed, when things went pear-shaped, they’d put aside those differences for the good of protecting one another. Naturally this led to a reconciliation of the pair by episode’s end, but that was to be expected. A perfect example of all of these elements is depicted of course in the River of Snakes episode, but for me, the best of example of the two’s importance to one another came in episode 5 (Rage of the Ape-Men) and its subsequent episode, Scent of Prey. As previously mentioned, grief is a central theme of the series, and in these episodes, it appears that one of characters is destined to experience such a loss again.  This also served as an important turning point as for me; it is where the characters went from traveling companions to family in my eyes.

Several other themes are explored in the show’s 10 episodes, to include remembering and honoring the dead, morality, sacrifice, and of course, friendship. I know what you are thinking; friendship was already an established theme through the Spear and Fang dynamic. This is true, but there are other characters where this theme is shown, most evident in the final episode of the season, Slave of the Scorpion, which serves as the introduction of a new character that I expect to be a prominent character alongside our already established protagonists or perhaps as an alternative focal point in the series.

The episode ends on a cliffhanger, prompting a bit of a good-news/bad-news situation. Good news is that the show has already been renewed for another season. Bad news is that a release date has not been announced as of yet. So I’ll just have to take solace in the knowledge that the show will be returning. However, patience has never been a strong suit of mine, and I am very curious to see how the show will wrap up the ongoing storyline.

Jeremy Butler is a film school graduate of the International Academy of Design and Technology. He is been writing for Upcomingdiscs since 2012; however, movies have played a big part of his life for much longer. Favorite genres include horror, science fiction/fantasy, and comedy. Favorite movies are V for Vendetta, Boondocks Saints, Kiss Kiss Bang Bang, and The Godfather.
MacGyver: Season 4 (2020) In The Heights