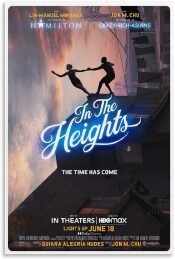 Every decade or so sees the popularity of a Broadway stage show become something of a cultural phenomenon. When I was young, Cats and Annie were the big-event shows. Over the years it’s been Andrew Lloyd Webbers Phantom Of The Opera and more recently Rent. In these last few years the stage champ has been Hamilton, written by Lin-Manuel Miranda. To say that it has been one of the more popular shows in the last few years would be an understatement. Based very loosely on the historical life of Alexander Hamilton, it is still currently the hardest ticket to get in New York City. Lost in the excitement and fame over Hamilton is that Miranda has had another rather large success with In The Heights. The play was selected best musical in 2003. While it never did come close to the success of Hamilton, it was also once a hard ticket to obtain. Just one year after Hamilton made it to the big screen, In The Heights will get its chance to offer moviegoers something to help bring them back to the cinemas.

As the film begins, we are introduced to Usnavi (Ramos) (there’s a rather amusing story about how he got the unusual name), who has gathered a few children together to tell them a story. We are introduced to the idea of suenito, or a little dream. And that’s the theme that will carry you through Usnavi’s tale. It all takes place in a little corner of New York City called Washington Heights. We’re encouraged to say it out loud so that it won’t disappear. And that’s where it all happens. We are introduced to a few of the citizens of this cultural neighborhood who each have their own little dream. Usnavi runs a neighborhood bodega, but his little dream is to return to his native Dominican Republic, where he dreams of rebuilding his father’s destroyed bar and living in his own corner of paradise. He’s not the only one with a dream. He’s trying to connect with Vanessa (Barrera), who works for a local hair salon that is about to be yet another business leaving the neighborhood. She finds she can’t find a place where she’s going to be accepted in that new neighborhood, and her little dream is to have a fashion boutique where she can design and sell clothes.

Nina (Grace) is just back in Washington Heights from her first year at Stanford. Her father (Smits) is determined that she “escape” the area, and he’s putting his car service business on the line to make sure he can pay for her to continue. But that’s not what Nina wants. Her little dream is to return to her roots and community, where she reconnects with her boyfriend Benny (Hawkins), who works for her father. He has been dedicated to the business and is upset that it might all go away so that Nina can be sent to a life she doesn’t want. Throughout the film she is hyper-aware of being home and just wants to listen to her neighborhood.

The supporting cast is an entire neighborhood of colorful characters that include the area matriarch Abuela (Merediz), who watches over everyone as if they were all her extended family, something she didn’t get to have on her own. We often view the scene through her elderly eyes, and at those moments the film has more heart than others. Not that there isn’t enough of that to go around. There is also a very amusing shaved-ice vendor played by Miranda that requires you to remain through the credits for an additional scene.

The most astounding thing I discovered along the 145 minutes of the film was that the main character of Usnavi was the least interesting. Yes, there is a really good story of self-discovery going on there, and he’s the one telling the story. I just didn’t find him very interesting. I found the two women of the story to be the most compelling. This was also enhanced, I believe, by the kind of musical numbers in which they were most involved. The music is a mix of traditional kinds of musical numbers and a style that can best be described as a kind of Hispanic rap. I understand what Miranda was trying to do here, and I’m very sure that these numbers will resonate with the younger audience, but to me it was hard to get to the emotional heart of these stories when they were somewhat rapping, while the more melodic songs often took me to those places Miranda wants you to go. And those numbers were far more consistent with Nina and Vanessa, and so for me that’s were the compelling narrative came from. That’s where I could really experience the emotional rush of it all. And to be fair, the mixture might have been a smart idea just because more folks might be reached this way. I am quite sure many of you out there will have the exact opposite experience as I had, and I totally get that.

The film is certainly a celebration of culture. The movie was filmed in Washington Heights, and so the culture bleeds through in every scene. The cast is exceptional. There isn’t a weak performer in the bunch. Smits was underused, I thought, but I haven’t seen the stage production, so I’m sure there is some faithfulness going on there. It’s easy to immerse yourself into this place and the people that populate this world. There’s a lot of passion here, and it certainly comes through in every frame of the film.

The choreography is ambitious, and I’m very curious to know how much of this is taken from the stage production. There are things going on here that I can’t imagine being pulled off live on a stage. There’s a huge pool scene that really takes a cue from some of the old MGM chorus scenes. There’s a rather clever balcony scene that might be a highlight in the film but couldn’t possibly be this cool on a stage. I’m sure there are plenty of differences, and since I’m not very likely to be seeing the stage production, at least not anytime soon, it will have to remain a mystery for now. “Maybe this neighborhood is changing forever.”

Gino Sassani is a member of the Southeastern Film Critic's Association (SEFCA). He is a film and television critic based in Tampa, Florida. He's also the Senior Editor here at Upcomingdiscs. Gino started reviewing films in the early 1990's as a segment of his local television show Focus. He's an award-winning recording artist for Omega Records. Gino is currently working on his 8th album Merchants & Mercenaries. Gino took over Upcomingdiscs Dec 1, 2008. He works out of a home theater he calls The Reel World. Favorite films: The Godfather, The Godfather Part II, The Body Snatcher (Val Lewton film with Karloff and Lugosi, not the pod people film), Unforgiven, Gladiator, The Lion King, Jaws, Son Of Frankenstein, The Good, The Bad And The Ugly, and Monsters, Inc.
Genndy Tartakovsky’s Primal: The Complete First Season (Blu-ray) The Lovebirds (Unrated)