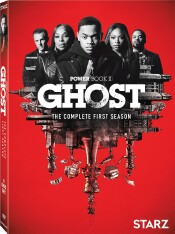 The first sequel series in the Power universe, starring quite possibly one of the most hated characters in the original series, and that’s a long list. Fans of the original series are likely still bearing a grudge against Michael Rainey Jr.’s Tariq St. Patrick for his murder of his father, James St. Patrick, aka Ghost, at the end of the original series. However, I heard tell when it comes to his actions in this sequel series, those are the least of Tariq’s transgressions. Picking up just a few days after the conclusion of the original series, Tariq adjusts to his new life at Stansfield University, where he immediately finds his way back into the drug game in hopes of financing his mother’s trial for the murder of his father, a rap she took for him. This Starz series shows Tariq’s descent from the world of privilege into the gritty street world, a world he knows next to nothing about because of his upbringing, but a world that he is determined to conquer. Rounding out the cast are Method Man, Mary J. Blige, and original cast member Naturi Naughton as Tasha St. Patrick.

When news broke about plans to create an entire universe around the Power characters, I remember rolling my eyes at the prospect. I figured that there might be some potential in a series that followed the Joseph Sikora character (which will also be a series), but the idea of following the Tariq character seemed farfetched. Given his propensity to manipulate everyone around him and those subsequent manipulations usually resulting in him getting in over his head and needing everyone else to bail him out, it just seemed like an act that couldn’t be sustained, especially given that that the people who usually bailed him out were now dead by his hand, in prison, or on the run. Also given where the show left off, I couldn’t see how he would find his way back to the drug business. With his father dead, his mother in jail, and his uncle leaving New York, where was Tariq going to get his supply from?

Enter Mary J. Blige as Monet Stewart Tejada, matriarch and Queenpin of the Tejada drug cartel. But how was Tariq going to get in her orbit? This actually came very organically through a fellow student at the school. OK, they established a connection, and though not initially trusted, Tariq managed to get himself on the payroll. I was not made a believer. Rainey Jr. took his hated character and made him reminiscent of his father’s character, who was also no stranger to garnering hate amongst the fan base. You should see the forums. Also reminiscent of the Jamie St. Patrick character is Tariq’s taste in women. Tariq has two main love interests, Lauren (Paige Hurd), a fellow student that represents legitimacy, and Diana Tejada (LeToya Tondeo), who represents criminal world that Tariq has chose to be a part of. Any of this sounding familiar? For true fans it does, because it is similar to the love triangle that his father was stuck in. This was a great addition for me, because it gives a great callback to the elements that made the original series work in the first place. It also makes it possible to draw parallels between Tariq’s path and his father’s, showing how alike the two really are. Hence the quote at the beginning of this review.

Of course, this season is also fraught with complications. Tariq’s transition into dealing isn’t a smooth one, while the truth about his father’s empire and his mother’s mother trial is now public, it means that Tariq has many eyes on him, none more focused than those of Cane Tejada (Woody McClain), Monet’s eldest son and enforcer for the cartel. From day one, Cane is suspicious of Tariq, and with good reason. Tariq is not an admirable character to say the least. He always has an agenda; this is shown early in the series when Tariq all but signs the death warrant for a Tejada cartel member as a means of gaining favor with the family. Despite this, Cane remains suspicious, which causes strain with his family. This is further explored through his obvious reservation to accept his mother as the head of the cartel due to the incarceration of his father. The Cane character has an interesting journey throughout the season, as he gradually goes from trusted enforcer to disowned Tejada. While his suspicions of Tariq are right, his execution and his temper cause him to act against the interest of the family, raising the ire of Monet, who is clearly ambitious and desires to fill the power vacuum left behind by the death of James St. Patrick. Blige is calm and calculating, though she clearly has a blind spot when it comes to her children. Above all else, Monet is ruthless; she will not hesitate to kill anyone who is in her way. At one point this may have even included Tariq.

A triumph of the season is its ability to have several different storylines going simultaneously. So while Tariq is establishing his burgeoning empire and Monet is making moves, we also get to follow the trial of Tasha St. Patrick. This storyline is told more from the perspective of her attorney, Davis Maclean, a lawyer with a reputation for doing whatever it takes to win. He lives up to this title, as he can be seen working several different angles, most of them barely teetering on the line of legality. I really dug Method Man in this role. He was smooth, but he could also get grimy with the best of them, as in the scene when he works with two minor characters of the original series to secure a desired outcome.

Speaking of characters from the original series, there is no shortage of cameos, which to my mind helps to establish the continuity of this series in this established universe. Victor Garber, Larenz Tate, and Monique Gabriela Curnen make cameo appearances, alongside Shane Johnson who returned as Cooper Saxe, who returned as a series regular. However, the most notable cameo is a Dday 1 cast member from the original series in the season finale. This was a shocking return for me, but also one of the best elements of the series thus far in my opinion. I won’t say who, but it is also not too hard to figure out, either. Either way this cameo perfectly sets up the character’s departure from original series, as well as sets the stage to break new ground for future installments in the Power Universe.

All and all, while I started out a skeptic, Power Book II: Ghost made me a believer in its ability to continue the series’ legacy. Rainey Jr. proved he’s charismatic and calculating, as well as willing to pull a trigger if necessary, thereby proving his ability to lead a series in the fashion that fans like myself are accustomed to.  I am therefore looking forward to see comes in Season 2, which has been announced, but no release date has been set. However, while we may not know when Season 2 is coming, we do that the next installment in the Power Universe (Power III: Raising Kanan) is due out July 18, 2021. I’m curious to see if it can capitalize on the momentum established by this series.

Jeremy Butler is a film school graduate of the International Academy of Design and Technology. He is been writing for Upcomingdiscs since 2012; however, movies have played a big part of his life for much longer. Favorite genres include horror, science fiction/fantasy, and comedy. Favorite movies are V for Vendetta, Boondocks Saints, Kiss Kiss Bang Bang, and The Godfather.
The Lovebirds (Unrated) The Hitman’s Wife’s Bodyguard