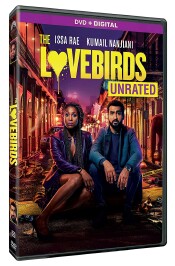 Nothing like being framed for murder to revitalize a dying relationship. Or least that is the premise that fueled this Issa Rae and Kumail Nanjiani-led romantic comedy. Now in recent years, both Rae’s and Nanjiani’s star powers have been on the rise, interestingly enough as a result of stellar performances in television series (Rai on Insecure, which she also produces, and Nanjiani on Silicon Valley). This has led to more theatrical roles, which have also been moderately successful. I anticipate that their stock will continue to rise, especially given Nanijiani’s induction into the MCU with his casting in the upcoming Eternals movie, and Rae is not slouching, either, with a whopping 17 projects that her name has been attached to produce. As glad as I am that these two are doing great professionally, I don’t see this Netflix-turned-home-media release doing much for either one of them. The previews gave it an air of intrigue, but unfortunately, the best details of the film were included in that trailer, so by the time I watched it, I was already desensitized following its promotional campaign. To be fair, the film was due to be released at the beginning of 2020, but COVID caused the project to be delayed, prompting the film’s move to Netflix instead of the theater. Now I originally watched the film back when it premiered on Netflix, and while my review necessitated the need to watch the film again, I can honestly say that there was nothing about the film that stuck in my memory following my initial watching. That alone should kind of tell you all you need to know about the film.

An opening montage tells the story of the relationship of Jibran (Nanjiani) and Leilani (Rae), from their first hookup, which turned into them spending the whole day together and falling in love. I will admit that this montage was charming, thanks to both characters’ inherent awkward natures, which they adeptly use to establish their chemistry. Fast-forward four years, and the spark in their relationship has all but fizzled out. Jibran is averse to trying anything new and has become rigid, while Leilani feels suffocated and craves new experiences. In a nutshell, they want different things and are starting to drift apart. This is evident when the two engage in a verbal sparring match over whether or not they would win The Amazing Race. This was actually pretty entertaining, because like the opening montage, this showcased both actors’ talents and their ability to top one another’s lines gave the hope of more quality dialog to come.

Things come to a head on the way to a dinner party when the two simultaneously realize that their relationship isn’t working. At the same time, a bicyclist nearly crashes through their windshield before getting back on his bike and fleeing. Next a man claiming to be a cop commandeers their vehicle and takes them along on his pursuit of the cyclist. Things take an awkward turn when the alleged cop runs over the cyclist and then proceeds to reverse the car and run him over again before casually getting out of the car and leaving the scene. In that moment, my thoughts mirrored those of Jibran’s: “I don’t think he’s a cop.”

When bystanders happen upon the scene and with the alleged cop long gone, our fractured couple find themselves blamed for the crime and are forced to flee the scene before the real cops arrive. Desperate to clear their name, the two must put their differences aside in order to figure out who really killed the cyclist, launching them into a conspiracy that includes corruption and murder.

As I mentioned, there was a great deal of intrigue in the beginning of the film, thanks to Rae’s and Nanjiani’s witty repetiteur. However, the whole story being told in the trailer made the film basically all sizzle and no steak. I understand the importance of including enough in the trailer to hook the audience, but if certain things would have been held back, it would have made more of a splash for the film. Like the scene with the horse; that would have huge amounts of shock value, if it hadn’t already been prominently featured in the film’s preview.

While the film doesn’t really break, I did enjoy the chemistry of these two characters. They are both awkward, but they are also very relatable; that is in no small part thanks to the actors portraying them. I would honestly have no trouble believing that they were a legitimate couple. They spend the entire film, disagreeing with one another, but the manner in which it they do it produces a couple of chuckles. While I didn’t burst out with the laughs, I didn’t chuckle enough for the film to be established as a comedy in my eyes.

In summation, while not the greatest romantic comedy that I’ve seen, it is not the worst. And while it may not elevate either star’s stock, I doubt that it will damage it either. Basically, The Lovebirds just is a romantic comedy. Nothing that is going to leave a lasting impression, but also not a bad way to pass the time if you and your significant other are looking for something to do.

Jeremy Butler is a film school graduate of the International Academy of Design and Technology. He is been writing for Upcomingdiscs since 2012; however, movies have played a big part of his life for much longer. Favorite genres include horror, science fiction/fantasy, and comedy. Favorite movies are V for Vendetta, Boondocks Saints, Kiss Kiss Bang Bang, and The Godfather.
In The Heights Power Book II: Ghost: The Complete First Season