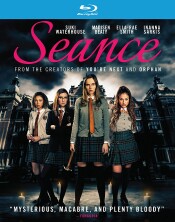 “How many friends did you have growing up? I just had one.”

A member of the cast has described this film as Mean Girls meets Final Destination. I don’t think I could come up with a better summation of the film if I tried. As I watched, I toyed with the idea that the film evoked Kevin Williamson-like nostalgia, but that was the best I came up with. The film is billed as a horror film, but of course there are elements that cause me to see it as more of a black comedy slasher film, like Happy Death Day. OK, that’s enough comparing it to other films; let’s talk about what Séance is. In a nutshell, Séance was a surprise for me. I hadn’t expected to like it as much as I did. As it started out, I figured it was going to be some run-of-the-mill ghost story, and I was prepared to write the film off, but as the film reached it apex and came with a couple of unexpected twists, I found myself leaning in and completely and utterly intrigued.

The film stars off with an inciting incident as expected, i.e. a death. Not just any death, but a death under mysterious and possibly supernatural circumstances. This leads to the introduction of our protagonist, excellently played by Suki Waterhouse of Pride and Prejudice and Zombies fame. Waterhouse’s character wastes no time making her presence known on screen in a manner in which I found to be very effective. I won’t go too much into details, but needless to say, we all know that it is the only truly effective way to deal with a bully. Naturally, this culminates in some administrative action and a trip to detention. During this time, the detainees decide to hold a seance for the newly departed student. Why don’t people realize that no good comes from messing with the unknown? Anyhow. I digress. As expected, communing with the dead produces a albeit predictable and grim outcome for all those in attendance. And it isn’t long before bodies start to pile up.

This portion of the film I admit is a bit tedious, because it is all boilerplate themes that have come to be expected of a film of this caliber; people die under suspicious circumstances, the protagonist and maybe one ally perform an amateur investigation, which basically leads them into greater danger. As I said, this is all very boilerplate, but the film does deviate from doctrine in some respects. For one, the cast is predominantly female, with essentially only one significant male character. I know what you are thinking; cue the romantic angle, but here comes the next deviation. The film does have a romantic arc, but not with this male character. While there is nothing uncommon about a same-sex relationship nor its depiction on screen, I enjoyed watching the film defy social convention and tell its story in its own manner.

However, the film’s crowning moment for me came in the form of an eleventh-hour twist that revealed that someone wasn’t who they were pretending to be. Granted, I do not feel that the story went into enough detail to satisfy my curiosity, but it was still believable and gave the film some shock value. As I said earlier, this without question was my favorite part of the film and makes for a really good sequence and conclusion for a film that could have easily become cliché.

In summation, while Séance does at time feel like you typical run-of-the-mill scary movie that you’ve watched over and over, I urge you to remain steadfast in your viewing. Just as you think you’ve seen all the film has to offer, that twist I spoke of makes its appearance, and I expect that you will find yourself enamored, just like I did myself.

Jeremy Butler is a film school graduate of the International Academy of Design and Technology. He is been writing for Upcomingdiscs since 2012; however, movies have played a big part of his life for much longer. Favorite genres include horror, science fiction/fantasy, and comedy. Favorite movies are V for Vendetta, Boondocks Saints, Kiss Kiss Bang Bang, and The Godfather.
GI Joe Retaliation (UHD Blu-ray) (4K) Free Guy