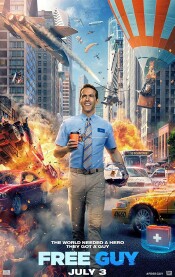 “I know this world is just a game, but this place, these people, that’s all I have. So I’m not gonna be the good guy. I’m gonna be a great guy.”

Free Guy is the love letter to video gamers of all ages that Ready Player One should have been. While Ready Player One spent most of its resources on spectacle and a rather convoluted mythology, Free Guy allows the heart to come from the characters and plays out as something much closer to the passion and attachment players have long felt for their favorite games and game characters. The film manages to do this without giving up on the spectacle. There’s plenty of that computer-generated magic here, enough to immerse us in the AI world of the game. But the film manages to reach out and connect to the humanity behind the games far better than Ready Player One could do at its best moments. That isn’t to say this is a perfect film. There are tons of flaws, and it’s not exactly the most original concept out there. In fact you’ll find extreme elements of both Groundhog Day and The Truman Show, and Ryan Reynolds has almost become a cliche in this kind of wisecracking, irreverent-but-charming character. Think Deadpool without … you know …  the F-bombs and the bloody violence. But take all of that “been there/seen that” aspect of the film, and you walk away smiling a little and totally entertained. Sounds like a fun summer movie to me.

Ryan Reynolds is Guy. He wakes every morning, says hi to his pet goldfish, and goes on to have the exact same day every day. He works at a bank in a city where the most extraordinary things happen pretty much routinely around them. A crook who busts into the bank announcing a stickup has our workers casually put their hands in the air and carry on a normal conversation as if nothing out of the ordinary is happening. Guy shares most of these routines with his best friend, bank guard Buddy, played with great wit by Lil Rel Howery. Planes and spaceships crash into the streets, and cops are having shootouts and car chases all about the town. What kind of life and place is this, anyway?

It turns out that Guy and his friends are background characters in a video game released by Antoine, played by Taika Waititi. But Antoine stole the base code for his game from developer Millie, played by Jodie Comer. She’s been playing the game to try to find a rumored secret level of the game that reveals her original build and proof that the game was stolen. Of course, all of this intrigue is played out in the real world with a lot of Waititi being Waititi. (over-the-top and crazy). But something rather magical happens when Guy meets Millie’s game-persona, Molotov Girl. He decides she’s “the one” and sets out to impress her. Suddenly he is self-aware and goes against his basic programing and starts to do good deeds. It ripples out into the real world where the strange character is getting a rather large cult popularity. Millie befriends this awakened character, and together they set out to cross the bridge that leads to the secret code and Millie’s proof her code was stolen.

Along the way we have so many kinds of stories going on at once. Reynolds gets to explore these awakening moments as the coming-of-age character who is already an adult, having always been fully formed and as he was. There’s more than a little of the romantic comedy going on between Millie and a person who isn’t really even there. But with each other’s help, they fight their way to the goal, while Guy leads a kind of rebellion that spreads his self-awareness to the population of Free City.

The film is full of the easy gags you might expect. While the film started under Fox Searchlight, the merger with Disney made it a Disney property, and they take full advantage of that windfall. Expect there to be a few really clever Star Wars and Marvel gags that actually work pretty well even if they are really pretty obvious. There are quite a few game Easter eggs. Not the avalanche found in Ready Player One; they didn’t spend near so much on the various clearances. But there are enough to keep you looking for them. There are some really sweet cameos that I won’t spoil by naming or even hinting at them here. That’s all part of the experience and will bring those smiles I was talking about earlier.

I can’t deny I loved the film in ways I wanted to love Ready Player One. Director Shawn Levy might not be the heavyweight with the Night At The Museum franchise being his best films and his connection to Stranger Things being a pretty solid hit. No, he’s no Steven Spielberg, but I think he bested him with this film anyway.

There’s an innocence here that can’t be denied, and Spielberg is much too old, rich, and comfortable to quite understand that today. He did once, to be sure. But I score this one for Levy. Check it out and “Don’t have a good day. Have a great day.”

Gino Sassani is a member of the Southeastern Film Critic's Association (SEFCA). He is a film and television critic based in Tampa, Florida. He's also the Senior Editor here at Upcomingdiscs. Gino started reviewing films in the early 1990's as a segment of his local television show Focus. He's an award-winning recording artist for Omega Records. Gino is currently working on his 8th album Merchants & Mercenaries. Gino took over Upcomingdiscs Dec 1, 2008. He works out of a home theater he calls The Reel World. Favorite films: The Godfather, The Godfather Part II, The Body Snatcher (Val Lewton film with Karloff and Lugosi, not the pod people film), Unforgiven, Gladiator, The Lion King, Jaws, Son Of Frankenstein, The Good, The Bad And The Ugly, and Monsters, Inc.
Séance (Blu-ray) Stargate SG-1: The Complete Series (Blu-ray)