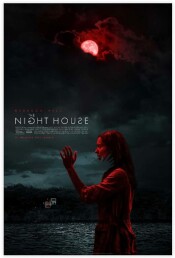 “We all have secrets.”

Right from the jump there’s a lot to like about The Night House, directed by David Bruckner and starring Rebecca Hall. It’s the kind of horror film that derives its scares from the point of emotional loss that cuts to the center of the kinds of things that really scare us all. From that point the film immerses us deep into the kind of atmosphere that doesn’t come from gory special effects or even some of the nicely placed jump scenes. Instead Bruckner engineers his cinematography to play slight tricks on our eyes that immediately reveal some clever usages of the film’s set designs and an Escheresque distortion of our point of view. It’s the kind of film that demands you pay very strict attention and then rewards you for the effort. Sounds like a great movie, yeah? Unfortunately, the screenplay, written by Ben Collins and Luke Piotrowski, who both penned the now shooting Hellraiser reboot/sequel, is the glaring weak link that caused me to leave the theater repeating, “I almost loved it.”

Rebecca Hall is Beth. When we meet her, she is saying goodbye to the last of the mourners from her husband Owen’s (Jonigkeit) wake. He committed suicide, taking a rowboat out on to the lake by the beautiful home he designed and built, where he shot himself. The first 20 minutes of the film sport almost no dialog as we watch Beth in her first hours alone trying to cope with the loss. It’s an emotional journey, as she reaches for a sleeping spouse who isn’t there and begins to drink rather heavily.

One night she starts to hear voices and see quick shadows to the point that she begins to consider that Owen’s ghost might be haunting the house. More interestingly for the audience is the evolving mood and behavior of Beth that plays out so wonderfully because of the tremendous performance of Rebecca Hall. She’s carrying a film that for quite a while doesn’t really offer more than glimpses of any action and hints of this haunting. We see these events much as she sees them, and when you consider her drinking and grief, you can’t help but question what is real and what isn’t. She’s a teacher at the end of the school year, which gives us two brilliant scenes. The first has her deal with a parent who complains about a student’s grade. As a former teacher, I have to say they nailed the interaction with what so many of us would like to do in that situation. The next has her at a bar with her colleagues, and again the stark reality of the awkward situation is quite compelling. And it’s all resting on the shoulders of an amazing actress. We really don’t have a clue where this is going until she gets a phone call from Owen’s cellphone. She gives the incident such a cringe-worthy creepiness that it’s far more effective than it should have been. I mean, we’ve seen that kind of thing before, haven’t we? Not quite. The incident has her dig out his phone to see if he really called. Of course, he didn’t, but the phone’s contents sends her down a rabbit hole that will drive the remainder of the film.

The journey makes you think. Things she discovers can be interpreted in different ways. It makes you think, how will what we leave behind be interpreted? A photograph of a strange woman in what appears to be a library or bookstore could be completely innocent. Or was the dude having an affair? Unfortunately, even more sinister options present themselves. You’re not around to explain, and something truly innocent might look really bad out of context. Part of the allure here is the mysteries she’s trying to unravel that aren’t even part of the horror story at all. In fact the film is loaded with red herrings; too many.

All the while, the scares are more gut-wrenching than you’ll expect. You’ll see animated figures, just like you always see in a “ghost” or “haunted” film, but this time the cinematography does some very clever things with the light and surroundings. The score is a wonderful blend of instruments and source sounds. Creaks in the house become part of the actual musical score, so that you are constantly being played in ways that force you to pay attention. Things go bump in the night in ways you’ve never seen or heard before.

Where it all falls apart is in the extraordinary poor planning of the writing. These guys really have me worried about that Hellraiser film right now. The story throws characters and some truly startling events at us that never get fleshed out or become part of the story. There are so many wasted opportunities, and those misplaced threads are a distraction and finally take away the satisfaction you will really want to feel with this movie. I really don’t want to mention much here, because it’s best you take this journey with minimum information. But her searching leads to huge discoveries that never fit. It leaves too many questions. The final resolution about what’s going on is a clever play on words that I did enjoy and could have been great, but they copped out at the very last moment to make the film completely rewarding.

It’s still a pretty solid outing showing more originality than is the trend these days. Add to that a spectacular performance and stunning production design both in the visual and sound departments, and there’s still a lot here to love. Just keep reminding yourself, “Nothing is after you.”

Gino Sassani is a member of the Southeastern Film Critic's Association (SEFCA). He is a film and television critic based in Tampa, Florida. He's also the Senior Editor here at Upcomingdiscs. Gino started reviewing films in the early 1990's as a segment of his local television show Focus. He's an award-winning recording artist for Omega Records. Gino is currently working on his 8th album Merchants & Mercenaries. Gino took over Upcomingdiscs Dec 1, 2008. He works out of a home theater he calls The Reel World. Favorite films: The Godfather, The Godfather Part II, The Body Snatcher (Val Lewton film with Karloff and Lugosi, not the pod people film), Unforgiven, Gladiator, The Lion King, Jaws, Son Of Frankenstein, The Good, The Bad And The Ugly, and Monsters, Inc.
Reminiscence A Place in the Sun (Blu-ray)