Posted in: No Huddle by Jeremy Butler on September 1st, 2021 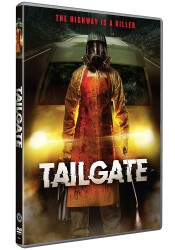 “The time for apologies is behind us.”

While the dubbing of this film leaves something to be desired at times, all in all I’d categorize this as a moderately entertaining thriller. Tailgate can serve as a cautionary tale for us all regarding being careful who you cut off in traffic. You never know; that person could very well be a homicidal maniac with a penchant for using pesticide on his victims. Or at least that is what the killer in this film was all about. Granted, this antagonist doesn’t quite rise to the level of Michael Myers or say Candyman (you got me, I chose those two characters because they both have movies due out in the immediate future), there is something to be said for a killer who believes that he has the moral high ground. And to think all of this could have been resolved with a simple and well-timed apology.

Impatient and prideful Hans, his wife and two children make their way to visit family on what should have been a day trip. Running late and annoyed, Hans makes the mistake of antagonizing a slow-moving motorist in a van. Little does he know; he has just made a very dangerous enemy. One that will stop at nothing to see him punished for his perceived transgression. Before Hans can stop it, he and his family are ensnared in a cat-and-mouse game with a eerily stoic psychopath.

Tailgate, also known by the Dutch title, Bumperkleef, does have some moments of thrilling, namely the eerily calm nature of driver/killer. Throughout the film, he comes off as less than threatening, which is clearly by design and a skill that serves him quite well, as it allows him to disarm his victims. This also explains how he is able to get close to those closest to his prey; to an unsuspecting person he just comes off as a polite, albeit creepy guy. That is until you threaten the order that he seems hellbent on instilling on strangers. I found this to be very interesting at first, but towards in the end it made me question, how he is able to operate with such impunity. Is he just very lucky? The killer doesn’t appear to very analytical or possess a genius intellect. He’s just sort of goes along in a casual manner. Granted the killer’s approach cinematically makes sense; however, I think a little bit more malice on his end would have carried a bit more weight. Something like him forcing Hans to attack him in front of witnesses, that way to the public he looks like the innocent bystander. It’s a bit cliché, but it is always a classic approach that I believe would work great here.

Even so, the film gives a great lesson on the philosophy that pride goes before man, as you never doubt that the lead character has brought this entire situation on himself. OK, OK, maybe no one deserves to be murdered, but the fact remains that he had an easy out that was presented to him on multiple occasions, but his desire to be right was stronger than anything. He chose to cling to pettiness, and it would be his ruination.

As foreign films go, this was one of the better ones that I’ve seen in a while. As I said, the dubbing isn’t perfect, but you won’t be left in the dust because of fast talking and slow lips. And in the end, perhaps this film could be a cautionary tale to those of us who tend to have a moderate-to-extreme case of road rage. Like the film’s tagline says, “Road Rage Has Its Consequences.”

Jeremy Butler is a film school graduate of the International Academy of Design and Technology. He is been writing for Upcomingdiscs since 2012; however, movies have played a big part of his life for much longer. Favorite genres include horror, science fiction/fantasy, and comedy. Favorite movies are V for Vendetta, Boondocks Saints, Kiss Kiss Bang Bang, and The Godfather.
Candyman 2021 The Conjuring: The Devil Made Me Do It (UHD Blu-ray) (4K)