The Conjuring: The Devil Made Me Do It (UHD Blu-ray) (4K)

Posted in: Disc Reviews by Gino Sassani on September 1st, 2021 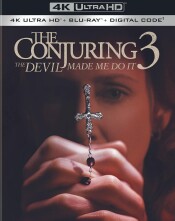 What James Wan did with The Conjuring (2013) was something I don’t think anyone expected, he didn’t just deliver a haunted house film that’s genuinely scary as well as being a technical achievement, but also he kicked off a successful franchise that’s now seven films deep with no signs of stopping. I’ll admit when it comes to the stories about Ed and Lorraine Warren I have a bit of a bias. I’m a sucker for just about any and every paranormal show out there, and I’ve read numerous books about the Warrens and their case files.  Everything from the “true” story behind the Amityville house, the “real” Annabelle, to some of the not-so-famous cases (at least the ones we haven’t seen a movie about).  Whether you believe in the paranormal or feel the Warrens were nothing more than skilled hoaxers, the stories behind their cases are the stuff that will always make for a great campfire story, and as it’s been proven, some successful and entertaining films. So when it was announced that the next film was going to be about case where a man is being put on trial and uses the defense of possession, claiming the devil made him commit the crime, I was excited.  Seeing how this was a real murder case that the Warrens were involved with, I was hoping we’d see a break from the traditional possession and haunted house film and delve into a courtroom drama; alas, that isn’t the case.  While the new film does take a somewhat different approach, I definitely have some mixed feelings on this one.

My biggest concern from the get-go about this film was that James Wan was not involved with directing the film.  Granted he may have only done The Conjuring and its sequel, but I feel we can all agree these films outshine the other entries in the franchise by a great deal. Wan is simply one of the best directors working in film period. Though he may only stick to genre films, his work with crafting stories and his work with a camera is well above many of his contemporaries in the genre. Then to decide to use Michael Chaves, the director of The Curse of la Llorona, to helm the film was immediately cause for concern for me. To be blunt, I hated that film. It was one of the worst films I saw that year. The saving grace was that at least Patrick Wilson and Vera Farmiga would be reprising their roles of Ed and Lorraine.

The film starts off in 1981. Ed and Lorraine are doing what they do best to try to help a family in need that is dealing with troubles of a paranormal nature. This time around it’s a little boy who may or may not be possessed by a demon. While the scene is fast-paced and intense, well, it does feel a bit familiar when you consider the glut of paranormal films that involve exorcisms nowadays. Wilson and Farmiga seem right at home in these roles, and it’s their chemistry that carries the brunt of this film. The biggest misstep taken this time around revolves around the family the Warrens are trying to help. Where the previous films seemed to spend just as much time with the troubled family as the Warrens, this time the family feels more like an afterthought. The central person they are trying to help is Arne Cheyenne Johnson (Ruairi O’Conner), who is accused of murdering his landlord, his claim being self-defense because he thought a demon was attacking him. The Warrens believe that while helping with the exorcism at the start of the film, the demon leapt from the boy and into Arne. The trouble is the demon seems to no longer possess Arne.

I was thinking this was going to go the route of having Arne on trial, but instead the film becomes a little detective story for Ed and Lorraine as they try to figure out why this possession case is so unique. The first third of the film feels a bit clunky, on par with the quality we see in the spin-off films. It’s not bad, but it definitely feels like it’s missing something.  Where the film picks up steam is when a totem is discovered and the Warrens start to believe that the possession is more in connection with a curse.

One of the films bright spots is seeing John Noble (Fringe) playing a former priest who is a caretaker of objects of the occult for the church. Seeing the Warrens interact with the former priest’s collection is one of the few clever moments in this, as they question why he would keep all these items when in fact they have their own collection of items in their basement at home.

As much as I enjoyed seeing more focus put on Ed and Lorraine, one thing I found a little troubling is how they are represented in this film.  No one is perfect, and it’s nice to have flawed heroes to make them all the more believable, but it’s hard for me to believe the characters would do certain things we see this time around.  One example is them breaking into a funeral home to see a corpse. We see it all the time in horror films, but these characters I just don’t believe would do this.  Then there is how they go about confronting the film’s main villain. This is problematic in many ways, but that delves into spoiler territory.

The film is loaded with film references, everything from The Exorcist, The Shining, and even the first The Conjuring film, and as much as the film comes close to being on par with the other films, it just doesn’t quite do it. It’s not a bad film, but it’s definitely the weakest of The Conjuring films. I don’t believe this is the last we’ll see of Ed and Lorraine Warren on the big screen; there are still quite a few case files worth exploring.  If you are a fan of the franchise, this is definitely worth checking out. I’m a little optimistic that after a second viewing the film will grow on me some more.  It’s a fun movie, but I feel too many liberties were taken with the story to take it in a more schlocky direction. I feel taking this case to the courtroom could have elevated the franchise.

The Conjuring 3: The Devil Made Me Do It is presented in its original aspect ratio of 2.39:1. The ultra-high- definition image presentation is arrived at with an HEVC codec at an average of 60 mbps. The ultra-high-definition image presentation isn’t going to be a huge leap forward from the Blu-ray. It’s taken from a 2K intermediate and upscaled here. Still you’re going to find that the subtle upticks in both contrast and black levels take full advantage of those things that go bump in the night. The improved shadow definition allows you to catch some of those nuanced forms in the darkness. There’s certainly some fine detail. The demon effects allow some nice detail with the green veins running down the throat and subtle colors in the eyes.

The Atmos track defaults to a really creepy 7.1 mix. The first thing that’s going to stand out are those huge knocks. The subs take over completely and shake your room. If you’ve got a good powered sub you’ll get your money’s worth here. Sometimes the overall sounds are a bit too loud, and it can infringe on dialog. It’s a bit manic, which is perfectly fine and appropriate, but somewhat unbalanced. Even the score can intrude. I was hoping for better subtle things in the surrounds but had to settle for a pretty solid reproduction of the important stuff and enough atmosphere here to pull you in.

The Occultist: (4:03) Briefly gets into the new spooky character created for the film.

By Reason of Demonic Possession: (5:24) This briefly gets into the true back story of the film, but the most interesting aspect is that it has the real Arne who was possessed and tried for murder.

Exorcism of Fear: (5:47) Here we get a behind-the-scenes look at how they pulled off the exorcism effects at the start of the film and footage of the contortionist that made the sequence so unsettling.

DC Horror Presents: The Conjuring: The Lover #1 (12:51) Here we have a motion comic with voice talent depicting the first comic for The Conjuring line that DC put out.  It’s interesting and gives more detail to the story of Kate and Jessica we see in the film.  There is also an added story “The Ferryman”.

While I still enjoy this film, I feel it is just not on par with the previous 2 The Conjuring films.  If you are a fan of the numerous spin-offs in the series, then I’m sure you’ll have fun with this one.  For those that would like to know more about the actual “true story” on Discovery Plus, there is a documentary called The Devil Made Me Do It that gets in detail about the actual case and the courtroom drama that resulted.  Hopefully in a couple years when James Wan completes Aquaman 2, he can return to the franchise and give us another creepy tale with The Warrens. Till then, this film will have to do.

Gino Sassani is a member of the Southeastern Film Critic's Association (SEFCA). He is a film and television critic based in Tampa, Florida. He's also the Senior Editor here at Upcomingdiscs. Gino started reviewing films in the early 1990's as a segment of his local television show Focus. He's an award-winning recording artist for Omega Records. Gino is currently working on his 8th album Merchants & Mercenaries. Gino took over Upcomingdiscs Dec 1, 2008. He works out of a home theater he calls The Reel World. Favorite films: The Godfather, The Godfather Part II, The Body Snatcher (Val Lewton film with Karloff and Lugosi, not the pod people film), Unforgiven, Gladiator, The Lion King, Jaws, Son Of Frankenstein, The Good, The Bad And The Ugly, and Monsters, Inc.
Tailgate Nashville (Blu-ray)