Posted in: Uncategorized by Brent Lorentson on September 3rd, 2021 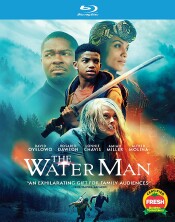 I grew up a big fan of the kids’ adventure films that populated the cinemas of the 80’s.  These kinds of films for the most part disappeared up until this 80’s revival has occurred over the past decade. It’s been a nice nostalgic wave for me, but it’s also become overused. Some of these films and shows are being done by those who weren’t even around, and it just is starting to feel generic. The Water Man, for the most part, has seemed to grasp what makes these films work without overindulging on the 80’s revival craze, and it’s simple. It just focused on doing a good kids’ adventure without treating the audience like toddlers or attempting to fill it with slapstick gags. I’m not sure when it happened that studio executives decided a family film needed to simply treat the audience like a sputtering, drooling toddler, but it’s a big reason why these films are mostly critically panned and, well, are not big blockbuster affairs. It’s all about marketing, and I feel in a non-pandemic world, The Water Man could have been more than a box office blip and a movie that will struggle to find an audience in a DVD and streaming world.

Gunner (Lonnie Chavis) is a lonely boy who seems to live his life through his art. He’s working on a detective comic, and it’s something he’s proud of, though his father played by David Oyelowo is having a hard time relating to it. The real heart of the story revolves around Gunner and his dying mother, played by Rosario Dawson. There is a nice chemistry between Chavis and Dawson, and when Gunner first sees how the sickness is wreaking havoc on his mother’s body, well, this is a rather impactful scene. This film could have played with the heartstrings; there is plenty of drama to milk with this family dynamic that definitely resonates with the audience. But this isn’t a film meant to depress the audience but instead give it hope, and that’s where the legend of the Water Man comes in.

I won’t get into detail with the town legend of the Water Man, but I’ll say that the legend holds the possible key to immortality, and Gunner sees this as his only way to save his mother. Seeing how this was a book before ever becoming a script part of me wonders if the writer ever read Stephen King and Peter Straub’s The Talisman, a book that’s been in some form of production since the early 80’s. There are a lot of parallels in the story, but this story seems to take a more simple approach as well as staying grounded in the real world.

Gunner seeks out Jim Bussey (Alfred Molina), the local town historian, to learn all he can about the town’s legend. Rather than tell the boy to not chase after legends, Bussey goes the irresponsible direction and indirectly tells the boy to find the truth for himself. He may not say those exact words, but typically in these kinds of film, these kind of characters usually are filled with cryptic warnings and insist the kids don’t do anything rash. To further enable Gunner on this quest is a local girl who claims to have seen the Water Man, and Jo (Amiah Miller) strikes up a deal to be Gunner’s guide into the woods to where she saw the Water Man.

The relationship with Gunner and Jo does at first seem a little forced in a story sense, but the kids have a natural chemistry that kept me involved in their story.  The adventure into the woods is enough to build some tension, but to raise the stakes even more, there is a forest fire that seems to be heading right to where the kids seem to be going. As if that wasn’t enough, there is an implied threat of something that is in the woods with the kids.  When it comes to this implied threat, my only scruple is we don’t quite know for sure whether it is something that’s just a part of their imagination, or a real threat.

With this film I’m not expecting a new children’s classic adventure film, but my biggest complaint is with David Oyelowo in front of the camera. Behind the camera he does a serviceable job, nothing that I’d consider memorable, but still better than many other films that clutter the family genre. But when you look at all the performances in the film, his seems to be the weakest, and I can forgive this, because he’s doing double duty on the film. My other complaint has to do with the film’s few animated sequences. At one point I feel the scene was done to save on the budget, considering it deals with a flood destroying a town, but in other aspects it just felt out of place. I get that the boy wants to make comic books, but this animation just doesn’t work for me in the execution.

At the end of the day, it’s the story’s heart and the performances that make this worth watching, but there’s nothing substantial enough to consider this a memorable film. Not every film has to be a classic, and this is definitely an enjoyable 90 minutes you can spend with the family.

Brent Lorentson is a horror writer and film critic based out of Tampa, Florida. With a BA in Digital Film, he co-wrote and co-directed Scavenger Hunt. His short stories have appeared in various horror anthologies. In 2019 his short script Fertile Blood will be a part of the anthology horror film Slumber Party. He is currently working on his first novel A Dark and Secret Place set to be released in late 2019. Favorite Films: Taxi Driver, Fight Club, I Saw the Devil, The Wild Bunch, Dawn of the Dead, A Clockwork Orange, Pulp Fiction, Heathers, The Monster Squad, and High Fidelity.
In the Heights (UHD Blu-ray) (4K) Shang-Chi and The Legend of The Ten Rings