Posted in: No Huddle by Jeremy Butler on September 7th, 2021 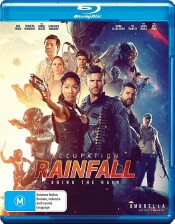 Not bad for a B-movie alien invasion dystopian film. That was a nice surprise, as I was all prepared to endure a bunch of cliches and basic character archetypes. However Occupation: Rainfall delivers a moderately decent movie experience. There were some obvious timing issues towards the film’s conclusion, but we’ll get into that later. Speaking of surprises, I was surprised to discover that this film is actually a direct sequel of a film that was released in 2018. Granted, there were some changes, such as Jet Tranter replacing Stephanie Jacobson as Amelia Chambers, or Amelia the human as she is referred to more frequently than by her real name. The film also features the addition of The Originals’ Daniel Gilles and Jason Isaac as a hilarious character. All in all, minus that timing issue I mentioned earlier, Occupation Rainfall delivered a surprising and overall enjoyable experience.

Given that I did not see the original film, I am at a bit of a disadvantage as to background information regarding the story, but fortunately for me, the film served pretty much as a standalone movie. Obviously there are a few callbacks to the original film in reference to the characters’ personal history, but other than that, it is pretty self-explanatory. The film also starts off with a narration that gives some background information, which ensures that you won’t be completely lost in the sauce. In a nutshell, aliens have landed on earth with the intent of invading. Naturally, the human race has risen to defend their home, and despite being outnumbered and technologically inferior, the human race has managed to hold their own for nearly two years. However, billions have died on both sides of the struggle, and the weight of the war is felt on both sides as well.

Even more surprising is the fact that some of the alien invaders have defected to the human side. Amelia, who acts a kind of diplomat, hopes for and makes attempts to establish an alliance that could eventually led to the brokering of a peace. Her opinions are not shared by all, however, particularly not by Wing Commander Hayes, as well as her former ally, Matt Simmons, played by a returning Dan Ewing. Or at least I assume they were allies in the previous film based on what I was able to peace together from context. Simmons, who acts as the film’s other protagonist, refuses to trust the defecting aliens following an incident that has left him scarred physically as well as emotionally. This comes to head when the humans receive intelligence suggesting that the aliens intend to use a weapon codenamed Rainfall to bring an end to the war. In order to procure the weapon before the aliens, or Greys as they are referred to by many, Simmons volunteers for the risky scouting mission, and just his luck, to complete the mission, he must put his trust in the very species that he refuses to trust.

So the story unfolds on two fronts, and both fronts have the makings of good storytelling. Up until the film’s climax, that is; that’s when they start to pull focus from one another as action is going down on both ends. Despite this, the only real issue I had was the aforementioned timing issue, which is actually an issue on both ends of the film. In the Simmons storyline so much time is built up to the inevitable conclusion that by the time it actually happens, I ended up feeling a little cheated, as I don’t believe I was given a real resolution. On the one hand, I recognize this cliffhanger as a shameless attempt to ensure that this sequel graduates into the franchise of a trilogy, and I respect the hustle. However, I still feel things were left a little too open-ended. There needed to be more of a resolution.

This statement is pretty much parroted for the Amelia storyline. No real resolution. Clearly, Amelia has a greater destiny in this franchise, but I would have liked to have seen her taking a closer step towards fulfilling it. Whether the film will get the follow-up film that it so desperately desires, I cannot say. But I will say that I hope it does. For the most part, the film is entertaining, and I am interested to see where things go from here. Plus there is still much ground to cover between our two protagonists, and I for one want to see how they reach such a resolution.

Jeremy Butler is a film school graduate of the International Academy of Design and Technology. He is been writing for Upcomingdiscs since 2012; however, movies have played a big part of his life for much longer. Favorite genres include horror, science fiction/fantasy, and comedy. Favorite movies are V for Vendetta, Boondocks Saints, Kiss Kiss Bang Bang, and The Godfather.
Shang-Chi and The Legend of The Ten Rings Profile (Blu-ray)