Posted in: No Huddle by Jeremy Butler on September 8th, 2021 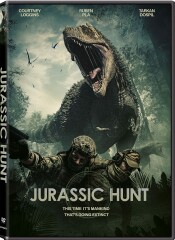 Have you ever wondered what the Jurassic Park franchise would have looked like if instead of a amusement park, it was a hunting preserve? Yeah, me either, but someone must have, because that is essentially the embodiment of the film Jurassic Hunt. After watching the film, I’ve come to the conclusion that some films just don’t need to be made. Especially if they are going to be done with cheesy special effects and sub-par storytelling. To put it mildly, this was not a movie for me, and if you are a fan of high-quality content, I’m pretty sure you will feel the same. I suppose the film reaches the level of a sci-fi made-for-TV movie, but other than that, I can see no higher aspirations for it. The film kind of puts you right into the thick of things; no real back story or anything like that. We are just kind of launched right into the hunt. On this type of film, I would have expected background information to be paramount. It would have been nice if they had at the very least an opening sequence that showed our protagonist’s motivation for coming to the park. Maybe add in some details that she lost someone close to her who was determined to expose the wrong dealings at the park, and now their mission has become her own. It’s a little cliché, but I could have gotten behind that. It certainly would have helped develop the character a little bit. At first glance, there isn’t really much to root for with her. She is clearly acting tougher than she is, and her attitude is very soon exposed to be all sizzle and no steak. If it wasn’t for the fact that she attempting to do something noble at the risk of her own life, she would be a throwaway character.

Speaking of her mission, the conspiracy that she seems hell-bent on exposing needed to be fleshed out too. On paper, there is nothing really inherently evil about them. Granted, their representative is a sociopath and all, but we never really get a real look behind the curtain and what it is that our protagonist is so determined to expose. I suppose using dinosaurs as hunting prey rises to the level of animal cruelty, but I don’t believe that is the platform that she is crusading for. Then let’s talk about the company that she is keeping. She is surrounded by killers, one of whom seems to have some pretty despicable things planned for her, and she is against killing or even carrying a gun. OK, she might as well be wearing a sign that says “sacrificial lamb” on it.

Now while the character does seem to come into her own a bit, and I will confess to having a odd fascination with the ragtag group that is formed when it becomes clear that the group entered the park the hunters and have become the prey, there is not much to the overall story. I suppose the main theme of the film is survival, but that is pretty obvious from the opening scene, when it clears that those that are supposedly running the park are truly in complete control, even if they don’t know it initially. There is another character who really doesn’t serve any real purpose: Rabbit. At first I felt sorry for him, and I thought maybe there could be more to his story, but he essentially just ends up being a plot device and an all-around waste of a story arc.

In summation, I sat down to watch a movie, and an hour and a half later, I was done, and I all I felt from the experience is the passage of time. Cruel, I know, but for me there was really nothing that I want to take away from this experience. Normally, I wouldn’t speak for anyone, but I have a strong feeling that if you watch the film, your experience will mirror my own.

Jeremy Butler is a film school graduate of the International Academy of Design and Technology. He is been writing for Upcomingdiscs since 2012; however, movies have played a big part of his life for much longer. Favorite genres include horror, science fiction/fantasy, and comedy. Favorite movies are V for Vendetta, Boondocks Saints, Kiss Kiss Bang Bang, and The Godfather.
Profile (Blu-ray) S.W.A.T. (2017) – Season 4