Posted in: No Huddle by Gino Sassani on September 8th, 2021 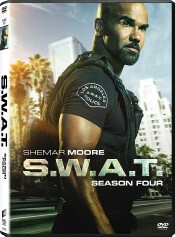 It was 1975, and cop shows were all the rage. The only way a crime show might be able to distance itself from the crowd was to introduce the audience to a group of cops that were not quite so known and show off special-unit kinds of skills and equipment. The solution in 1975 was the L.A. SWAT team. Most folks didn’t know what SWAT was. It stands for Special Weapons And Tactics. They are the guys who have the cool armored trucks and go where the serious action can be found. Hostage situations and severe firepower that overwhelms the typical cops on the beat are no match for these elite forces. So Steve Forrest and Robert Urich took our televisions by storm. The amazing thing is that the series was a mid-season replacement in its first year and only really lasted one complete season. It was 37 episodes and out. But the theme by Barry De Vorzon became a top-40 hit on the radio, and while the ratings never really caught fire, something about the whole experience remained in the pop culture all of this time. An A-list film in 2003 that starred Samuel L. Jackson, Colin Farrell, Jeremy Renner, Michelle Rodriguez, and LL Cool J did well enough at the box office to spawn a few direct-to-video sequels in name only. And it all went away once again.

Jump to 2017, and it appears little has changed. Cop and crime shows are all the rage, and the only way to stand out is to introduce the audience to a new kind of unit or team. That’s how we got the NCIS, Criminal Minds and CSI franchises, to be sure. So why not pull out a few old tricks. That appears to be television gold these days with remakes of Hawaii Five-0, MacGyver, Magnum P.I., Charmed, and The Equalizer all having significant runs in the primetime schedule. Why not bring out SWAT? That’s exactly what happened, and here we are four years later with the fourth season hitting the video shelves on DVD.

The new version of the series is led by Criminal Minds’ star Shemar Moore as Hondo Harrelson, the squad leader of our SWAT team. It’s the part played by Steve Forrest in 1975. Hondo ends up promoted over the expected new head Deacon Kay, played by Jay Harrington, when their previous leader is involved in a tragic shooting result. There was bad blood, and it remains a challenge for Deacon, but they’ve put that aside to keep the team strong. Deacon was played by Ron Perry in 1975. Alex Russell plays Jim Street, the young buck with a lot to prove but who has been mentored by the team’s previous leader. Street was played by Robert Urich in 1975. The team’s tactical head and equipment driver is Luca, played by Kenny Johnson. If Johnson looks familiar, he should. He was on fourth of the infamous Strike Team on The Shield. It’s no coincidence, either. SWAT was created by Shawn Ryan, who also created The Shield. Johnson plays a different character, but we find the two shows do share a universe, as The Shield’s David Marciano plays Detective Billings in both shows. Yet there are other Shield actors in new roles, including Ryan’s wife Cathy Cahlin Ryan (Vick’s wife), now the team’s psychiatrist, and David Rees Snell (Ronnie) as recurring Detective Burrows. For some reason, Kenny Johnson is not in a ton of episodes throughout the first four seasons. This season he’s supposed to be stuck in Germany by COVID and appears mostly via Zoom. He does return in person for a handful of episodes but remains sparsely used. Luca was played my Mark Shera in 1975.

To round out the team, we have Lina Esco as Alonso, the female member of the team who has to work harder to show her stuff because of the ol’ boy’s network. She’s also the team’s best sharpshooter. This is a new character not in the original show. David Lin is Victor Tan, another new character. He’s the tech expert on the team. Patrick St. Esprit plays Robert Hicks, the unit’s captain.

This is a rather tightly written show that always sports a quick pace but is never manic. The action rises to the occasion each episode, and you will get plenty of firefights and explosions. The team doesn’t really just handle those special cases. They go after terrorism and high profile crimes. There’s more investigation in this show than there was in 1975. The show also contends with some pretty big issues this season. Hondo deals with the racial issues involved in policing, and there is COVID to deal with now. Interrogations are conducted with glass shields, and those fancy facial recognition tricks are a little harder to pull off with the population wearing masks.

One of the best stories and relationships comes from Hondo dealing with a gangbanger in prison who was once his running mate and best friend as a kid. The always exceptional Michael Beach plays Leroy. Now Leroy’s got a chance to get out of prison and is disappointed that Hondo decides not to speak for him at his parole hearing. Hondo has been trying to raise Leroy’s troubled son, Daryl (Frost) and keep him from ending up like Leroy. He doesn’t think that will happen if Leroy gets out. Of course, he does, and there’s some wonderful tension here that is the best material of the show. Throw in Hondo’s estranged father, now ill and living with him, and these four truly dominate the season’s stories. This stuff is so much better than the typical cops and robbers. The chemistry between these guys is compelling and are all my favorite episodes.

There are 18 episodes on five discs. Extras include deleted scenes, an action feature, blooper reel and a couple of commentary tracks. It’s very little like the 1975 show but stands on its own pretty well. “Don’t tell me those guys are back again … really?”

Gino Sassani is a member of the Southeastern Film Critic's Association (SEFCA). He is a film and television critic based in Tampa, Florida. He's also the Senior Editor here at Upcomingdiscs. Gino started reviewing films in the early 1990's as a segment of his local television show Focus. He's an award-winning recording artist for Omega Records. Gino is currently working on his 8th album Merchants & Mercenaries. Gino took over Upcomingdiscs Dec 1, 2008. He works out of a home theater he calls The Reel World. Favorite films: The Godfather, The Godfather Part II, The Body Snatcher (Val Lewton film with Karloff and Lugosi, not the pod people film), Unforgiven, Gladiator, The Lion King, Jaws, Son Of Frankenstein, The Good, The Bad And The Ugly, and Monsters, Inc.
Jurassic Hunt NCIS: Los Angeles: The Twelfth Season