Posted in: No Huddle by Jeremy Butler on September 14th, 2021 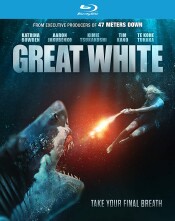 No good deed goes unpunished, I suppose, especially when it comes to great white sharks. In Great White, an unsuspecting group on a blissful tourist trip find themselves at the mercy of a bloodthirsty shark as it stalks them on the open seas. The film delivers some decent scenes of suspense, but for the most part, the action is a bit on the predictable side as it follows the blueprint for a movie of this genre: there is going to be one character who is completely unlikeable, several members of the cast are fated to fall victim to the sharks, and out of the original group only maybe one or two will survive to tell the tale. While there are several moments of predictability, that isn’t to say that the film does not have its areas of excitement.. I’m not sure it is a movie that I would feel compelled to see again, but not bad for a one-time watch.

Kaz and her boyfriend, former marine biologist Charlie, operate a seaplane tourist business. While business is not exactly flourishing, they get by. Eventually, an opportunity for a big payday presents itself in the form of Joji and his wife, Michelle, who are hoping to book the couple’s plane for a day trip. Kaz and Charlie along with their cook, Benny, take the couple to the picturesque Hell’s Reef (I know, the name gives a heavy dose of foreshadowing). Their nice opening is ruined by the discovery of a corpse of a man that shows all the telltale signs of a shark attack.

Discovering the man’s phone and seeing that he wasn’t alone at the time of the attack, certain members of the group feel obligated to look for his companion, as she could very well be alive and trapped, while others feel that it is not their problem. Human decency wins out, but it also proves to be the group’s downfall as they quickly discover the wreckage and fall victim to the same shark, which cripples their plane and forces the group onto a life raft. This is that good-deed part that I mentioned earlier. Stranded miles from shore, the group finds themselves in a desperate fight for survival to make it back to land before their limited supplies run out. All while contending with a shark with a taste for blood.

So let’s tackle the predictable bits first. As I mentioned, there is an unlikable character who essentially acts as the group’s antagonist. While this is expected, it is also necessary. Although this character usually generates a great deal of annoyance for audience members, he also brings a much-needed balance among the cast members. In this instance, yes, the Joji character is a pain in the behind at very decision point; he also embodies the panic that is experienced by the rest of the cast. He makes that fear palpable for the audience, thereby injecting the required tension for every scene.

Then there is the accepted practice that a majority of the cast must fall victim to the shark. Let’s face it, would anyone actually watch a horror movie or thriller where every person survived? Of course not. That’s what makes the film exciting; people have to die. The important thing is the manner in which it is done. That is what determines if the film is any good or not. The order is also important, because that’s what helps determine if the film is going to break new ground or not. Order of importance, I like to call it. Basically, most films, this one included, tends to kill off lesser characters early on and then work their way to the big ones, maybe sacrificing an important one during the film’s climax. This again made the film predictable, as I was quickly able to determine who would be killed and with varying success the order of the deaths. I feel the film could have capitalized on the sense of impending doom if they would have varied this order a bit. A prime of example of this being expertly done was Deep Blue Sea. Who among us was not shocked when Samuel L Jackson was killed right in the middle of his rousing speech? It added shock value. I think this film could have benefited from a little bit of that shock value.

Now the survival piece. This kind of goes hand in hand with the last paragraph covering the deaths. Well, people have to die; that is a given. However, at least one person has to survive; that is another given. While I won’t say how many people made it out alive in this film, I will say it was who I expected to survive. In truth, the film kind of gave away earlier in the film with a clear reveal that would have made theirs a very cruel end. However, had the film decided to go in this direction, I can’t say I would have hated it. Definitely who have brought out that shock value that I mentioned.

So, in summation, while Great White does have several moments of predictability, as I explained, these moments were actually necessary and crucial elements to the story. And as such, I don’t hold it against the film, which I enjoyed for the most part. I’m won’t be re-watching the film again right away, but perhaps in a year or two when the order of events have had time to fade from my memory, I won’t be opposed to another viewing.

Jeremy Butler is a film school graduate of the International Academy of Design and Technology. He is been writing for Upcomingdiscs since 2012; however, movies have played a big part of his life for much longer. Favorite genres include horror, science fiction/fantasy, and comedy. Favorite movies are V for Vendetta, Boondocks Saints, Kiss Kiss Bang Bang, and The Godfather.
NCIS: The Eighteenth Season NCIS: New Orleans: The Complete Series