Posted in: No Huddle by Gino Sassani on September 10th, 2021 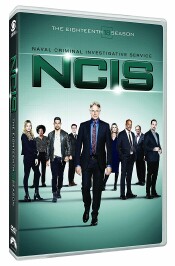 CBS releases the 18th season of NCIS on DVD, and just the sound of that gives one reason to pause. There are few shows or franchises that get to live in that rarified air. In the modern age of television, only the Dick Wolf Law & Order series has accomplished this kind of sheer mass of episodes. The NCIS landscape is certainly in for some big changes. The New Orleans show ended with its 7th season last year, and we’ll be talking about that show in the days to come. This 18th season of the mothership includes the 400th episode of just that series. The franchise will close in on its 900th episode next season with the addition of NCIS: Hawaii. CBS still has production facilities in the Island State, and those will soon be put to good use extending the family that actually started with JAG, and if you include that 10-year run, the franchise is over 1000 episodes. Shows don’t last that long without doing something right.

The 400th episode of NCIS is a bit of a special one. The show goes back in time to the days when Gibbs (Harmon) and Ducky (McCallum) first met. A current case takes them back to that meeting, and we get to learn some of the quirks of that relationship and where it came from. In fact, if there is a theme for season 18, it’s Gibbs and his relationships. A lot of the season’s stories really bring some of those relationships to new levels, and for some, full circle. Gibbs is absolutely the big story this season. Imagine a character that has been on a show for 400 episodes and he can still evolve and expand. That’s exactly what you’re going to get here.

As the season begins we find Gibbs taking some time off to help out his oldest buddy, Fornell. The 17th season ended with Fornell’s daughter overdosing and nearly dying. Now the two are trying to bring down the organization that supplied the deadly drugs that nearly killed her. Joe Spano is always a treat on the show, and he gets a lot of episodes this season, particularly this 6-episode run in the beginning of the season. It’s also one of the more humorous exploits of the franchise history. Any time these guys get together, it’s a hoot. They share incredible chemistry and really act like the good friends they portray. I fell in love with Joe Spano’s work back in his Hill Street Blues days, and watch this season of NCIS and you’ll agree he hasn’t lost a step.

It doesn’t end for Gibbs there. When he does get back in on cases, he ends up getting in serious trouble. He nearly beats a suspect to death. The guy was torturing and drowning dogs that didn’t win for him at dog fighting. The action gets him suspended and nearly costs the team their jobs when they attempt to lie to cover for him. Gibbs isn’t sorry, of course, but it nearly costs letting a criminal go when it hurts his credibility in court. When he meets an investigative reporter, he spills the beans, which puts Vance (Carroll) in a corner and unable to protect him. It does lead to a new love interest for Gibbs. Harmon’s real-life wife, Pam Dawber, joins as the reporter who gets Gibbs to spill his guts. We remember Pam Dawber as Mindy, who co-starred with Robin Williams in Mork And Mindy, but she and Harmon have been married since the 1980’s.  So maybe there is some good news for Gibbs. The dog storyline is a bit ironic. Mark Harmon has dogs that he brings to the set which has been a bit of a … bone of contention with his fellow cast and crew. There have been reports of bites and issues. It’s the reason Pauley Perrette left the show a couple of years ago. Kind of surprised they went there, but no question this is as much of an emotional year for Gibbs as we’ve ever seen. Gibbs loses another friend when Jack Sloane, played by Maria Bello, leaves the show to remain in the Middle East to help woman there.

Sean Murray has grown incredibly on this series. He started in the first season as the “probie” new guy and now is the office’s senior agent and in charge a lot when Gibbs is either off playing Butch and Sundance with Fornell or suspended. He’s good at it, and I’m not sure there isn’t some possible passing of the torch down the road. Earlier I would have sworn the show couldn’t go on without Gibbs, but look at the 20 years of spin-off accumulation and I can see NCIS someday without Gibbs. Murray can take on that role. What a wonderful evolution over the years for the character and actor. I just wish Tony could be there to see it.

Nick (Valderrama) finds out his father is still alive, and it brings out one of his more emotional episodes. He begins to form a bit of a deeper relationship with Ellie (Wickersham), and just when it looks like it’s going somewhere huge, she’s going to be leaving the show. It’s been announced for some time she was leaving, but the way she exits, I’m not entirely convinced we’ve seen the last of that character.

Diona Reasonover is starting to make her mark as lab tech Kasie Hines, but I just can’t quite get used to her personality. I’m still not sure what to make of it, and she makes me cringe from time to time. She’s a fine actress and by no means dragging the show down. I just can’t seem to feel the chemistry.

COVID rears its ugly head after those first six episodes. Jimmy (Dietzen) loses his wife off-screen, and it gives him a few really nice beats to deal with the loss. McCallum is doing less and less on the show, so it gives Jimmy pretty much the center stage in the morgue now.

COVID is present here more than the other shows to date. The crew ends up on COVID compliance detail when they are being punished for lying to protect Gibbs. Of course, they end up solving a huge case, but here’s a chance to take episodes in a direction not before thought of. The same kinds of mask and suspect separation protocols are in place here, and you’ll find less background actors and extras. Stories get a little more tightly contained, so it fed into the Gibbs arc pretty well, all things considered. The season ends with a cliffhanger on Gibbs, and we finally got to see one of the boats he’s built in the water.

There are 16 episodes on four discs. You get that typical season wrap-up, a feature on the 400th episode, and a cast member goodbye. There’s also a little short on the show’s COVID protocols.

NCIS can still surprise us after 18 years and over 400 episodes. There have been many cast changes and new challenges, but for right now, NCIS “isn’t going anywhere”.

Gino Sassani is a member of the Southeastern Film Critic's Association (SEFCA). He is a film and television critic based in Tampa, Florida. He's also the Senior Editor here at Upcomingdiscs. Gino started reviewing films in the early 1990's as a segment of his local television show Focus. He's an award-winning recording artist for Omega Records. Gino is currently working on his 8th album Merchants & Mercenaries. Gino took over Upcomingdiscs Dec 1, 2008. He works out of a home theater he calls The Reel World. Favorite films: The Godfather, The Godfather Part II, The Body Snatcher (Val Lewton film with Karloff and Lugosi, not the pod people film), Unforgiven, Gladiator, The Lion King, Jaws, Son Of Frankenstein, The Good, The Bad And The Ugly, and Monsters, Inc.
Mortal Kombat Legends: Battle of the Realms (UHD Blu-ray) (4K) Great White (Blu-ray)