Posted in: No Huddle by Jeremy Butler on September 17th, 2021 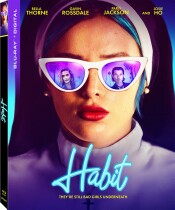 For a movie with a main character who has professed such a love for the man upstairs, this may very well be the most blasphemous movie I’ve ever seen. I mean, talk about being led astray. That said, Habit is not without its entertainment, as long as you are able to not take what you are observing too seriously. I don’t imagine that the film is going to sit well with the devout, but those able to see this film just as it was intended (as a film) may find something to enjoy. Bella Thorne leads a cast that includes Gavin Rossdale, Paris Jackson, and even the co-writer of the film, Libby Mintz has a starring role. As a bit of a disclaimer, I should mentioned that the film is very sexually charged, though I wouldn’t call it explicit. The film relies more on the innuendo of sex and other depravities more than anything else. However, even then I wouldn’t recommend it for family movie night.

The film follows Mads (Thorne), who in a nutshell is a bit of a rudderless ship. It’s evident that she’s led a hard life and that not many breaks have come her way, but she does stay devout in one thing: she has an unwavering love for Jesus Christ. The manner in which she expresses this love is what tends to get her into trouble. I’m sure I don’t need to spell it out. As a result of this expression of love, she finds herself jobless in Los Angeles. With little in the way of skills, she ends up assisting her childhood friends Addy (Andeja Peijic) and Evie (Mintz) in their drug-dealing endeavors for small-time dealer Eric (Gavin Rossdale). What could possibly go wrong, right?

After an all-night party, the girls wake to find their drug stash as well as all the money stolen. After a brief panicking period, they inform the coke-out Eric, who explains that the stolen drugs belonged to a particularly ruthless drug suppliern and that unless they get her money, they will all likely be killed. At a loss for how to come up with the lost twenty grand, Mads makes an appeal to her one true beloved for a sign. You won’t believe what she comes up with. Suffice to say, I’m not sure I would have interpreted it in the manner that she did.

This has been quite a productive time for Bella Thorne. Over the last two years, she has averaged about three to four movies a year as well as a television series, and let’s not forget the music videos, either. I have to respect the girl’s work ethic. However, I can’t say that every project that she has been involved in is of great quality. In reference to this particular project, while I did find some things to enjoy, the plot kind of falls apart mid-movie. For one, it was impossible for me to take the film’s antagonist, drug queenpin Queenie, seriously. She didn’t come off the least bit threatening in my opinion, and that includes when she was actually doing threatening things. There is actually a scene where she is essentially committing an act of torture, but the manner in which it is done is more comical than anything. The character is just so out there mentally. Sure, some of this could be explained by her sampling her own product, which I believe she was doing without question, but there is an inner malice and ruthlessness missing for the character needed to make her truly someone to be feared. Without that element of fear, I just found myself wondering, why should the girls even be afraid? Which basically stalls the film’s entire premise.

The whole point of the story is the girls’ need to raise the money so they won’t be killed. That is the film’s central focus, but it actually turns out to be such a small part of the overall film. The majority of the film follows Thorne’s character’s descent into depravity, and given where her character started, it’s not much of a drop, if you ask me. I will say that Thorne plays up the seductress role, going so far as to corrupt at least one man of faith, which while possible, was done in outlandish fashion. I did enjoy Thorne’s character narration, which I found to be the most interesting aspect of the movie. Then, of course, there is the scene that made me laugh out loud. Let’s just say, I don’t care how down on your luck you are, never try to rob a nun.

While not for the entire family, lovers of independent films will find something to enjoy about the film. As I said, the plot does fall apart in the middle of the film, so you should be prepared for that. It’s not a movie that I would eagerly seek out, but you are looking for a way to kill time, you could do worse than this movie.

Jeremy Butler is a film school graduate of the International Academy of Design and Technology. He is been writing for Upcomingdiscs since 2012; however, movies have played a big part of his life for much longer. Favorite genres include horror, science fiction/fantasy, and comedy. Favorite movies are V for Vendetta, Boondocks Saints, Kiss Kiss Bang Bang, and The Godfather.
Star Trek: The Original 4-Film Collection (UHD Blu-ray) (4K) Zack Snyder’s Justice League (UHD Blu-ray) (4K)