Posted in: Disc Reviews by Gino Sassani on September 18th, 2021 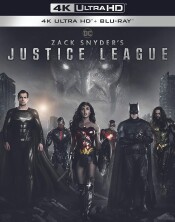 When Justice League hit the box office in 2017 it was met by relatively good box office numbers but not warmly received overall. It was a troubled shoot. During production Zack Snyder had to leave the director’s chair when his daughter Autumn passed away. When you consider how hard the folks at DC have been chasing the Marvel Cinematic Universe, it was no surprise that they brought in Joss Whedon to pick up the pieces and finish the film. Whedon, of course, directed the first Avengers film for Marvel, which turned into the perfect example of how to bring a diverse group of heroes together for a film. Whedon was also the king of the ensemble cast from his early days on Buffy The Vampire Slayer and later Firefly. The first problem was that Whedon and Snyder have very polar opposite styles. Snyder rules with tons of angst, darkness and brooding characters. That’s great for Batman. Not so much for Superman. Whedon loves to keep things light no matter how big the stakes of the film’s events might be. It’s night and day, and it’s no wonder it really didn’t work out so well. Later we would start to hear stories of abuse by Whedon on the set, mainly from Ray Fisher who played Cyborg. The studio fumed, and the fans expressed their disappointment by demanding that DC/Warner Brothers allow Snyder to go back and make the film he really wanted to make, and so the wheels began turning.

DC eventually relented, and after nearly four years, they put a pile of money on the table and granted the Snyder fanboys their wish. But things are different now, and a new cinematic release is pretty much out of the question. So it was originally decided there would be a mini-series made for HBO-Max, the company’s streaming service. The idea of a series and film went back and forth, and eventually a kind of hybrid ended up taking the slot. What we got was a four-hour film separated into seven distinct chapters and a decidedly obvious halfway point. So you could watch it in seven roughly half-hour segments, two films, or one mega-marathon film. The HBO-Max numbers were pretty good, and so now the film is available on UHD Blu-ray in 4K in a much better-looking presentation than it had during its initial life as a streamer.

The story is still exactly the same. The difference is that now the story is much wider, taking branches not even hinted at in the initial theatrical release. The f/x are completely new with a much-improved-looking Steppenwolf. Originally the face was considered too scary by Warner Brothers. After seeing it, I’m not at all sure where that was coming from. The basic design remains. To me the biggest improvement is in the character’s armor, which now is somewhat alive. The metal moves and shifts, and there’s actually something truly engaging and compelling in that design. No Whedon footage has been used, at least that’s what we’re told, and I’ll assume it’s the truth. Now the story is spread over seven chapters, as follows:

Part One: I Don’t Think So, Batman

This segment covers Bruce (Affleck) beginning to put together the team. He meets with a reluctant Arthur Curry, aka Aquaman (Momoa). Wonder Woman (Gadot) foils a terrorist plot in England. The Motherbox on Paradise Island awakens and draws the attention of Steppenwolf (Hinds) and sets the invasion plans in motion. Of course, there’s a big battle as the Amazonians attempt to stop the theft of the Motherbox. There is a much more extended battle here than the original film.

Part Two: The Age Of Heroes

The Amazonians send a fiery signal to Wonder Woman, and now she knows the danger Bruce has been worrying about is actually here. A break-in at Star Labs introduces us to the location of the second Motherbox, and we meet Cyborg (Fisher). Here Diana tells Bruce the history of the Motherboxes, and we get an extended flashback scene that looks more like a Middle Earth story than a comic-book-hero story. This is another quite noticeable extension from the original film. She explains that the three boxes were split up so that the “unity” required for the terraforming and invasion of Earth could be thwarted. The boxes were given to the Amazonians, Atlanteans, and Lanterns/humans. Earth would become the first planet to ever thwart the plans of Darkseid (Porter) and remains a bit of a thorn in his side. So Steppenwolf hopes to redeem his failure by gaining Earth now. Here the story bears a remarkable resemblance to recent events over at Marvel. Darkseid is a huge story point that is brought back from its Whedon elimination. Darkseid looks, sounds, and acts a lot like Thanatos, with similar aims and trying to bring together epic elements to achieve his aims. They could have done more to at least not make them appear so much alike, at least physically.

We now turn our attention to recruiting The Flash/Barry Allen (Miller) by Bruce and Cyborg by Diana.

Barry is an easy and eager recruit, while Cyborg has some serious trust issues. There is so much more Cyborg material here. He wasn’t used much by Whedon, and I suspect that’s a huge part of his grievance with him. Steppenwolf locates the second Motherbox, so now there’s just one more to obtain.

Things heat up with the first battle between the early team and Steppenwolf and his creatures. Lots of action here, and again this is a huge expansion from the original film. The Flash, Wonder Woman, Cyborg, and Batman are eventually joined by Aquaman at the last minute. The idea of resurrecting Superman is finally approached as the team realizes they could use the power of a Motherbox along with the Kryptonian ship to bring back Superman. It’s a desperate idea but now appears to be their only hope. We also get our first look at the inclusion of The Martian Manhunter/Jonn Jonz (Lennix). This inclusion was not a part of the original film at all. This chapter brings us to the film’s halfway point and one complete disc.

Part Five: All The King’s Horses

The team starts to put their plan in motion. That means digging up their old friend Clark Kent/Jor-El/Superman (Cavill). Most of this chapter deals with the resurrection of Superman and the big fight between him and the other team members. Clark wakes up grumpy, and this is a huge battle.  Steppenwolf is indeed drawn to their actions and gets his hands on that third and final Motherbox. Now they have to calm Superman down and stop the invasion.

Zack Snyder knows dark, and this film is decidedly darker and moodier than Whedon’s film. Lois (Adams) and Clark return to Smallville, where he slowly gets his memories and temper under control. He dons the black resurrection suit. Here Zack gets caught in a little fib. He once claimed he had always shot the Superman scenes with a black suit and Whedon color-corrected it to the more iconic suit. That’s absolutely not true. Behind-the-scenes footage clearly show Cavill in the traditional suit for the entire shoot. The color correction was done here. I mean, let’s be honest. With Snyder, you just can’t go dark enough. Here the film is more like the original with much of the final assault on Steppenwolf’s tower pretty much the same except for the f/x shots, which look all changed.

Here things diverge again. The aftermath of the film would have led into the events of the films to follow. We get a lot of that here, particularly the alternate dimension/timeline that brings a surprise character into the picture. There’s more formal introduction to The Martian Manhunter, and you’ll get a pretty clear idea where this was going to be headed. It’s unlikely any of these threads will be picked up, and the combined universe appears to be over, at least as a major element. I get conflicting answers about how much of this is canon going forward, but it really doesn’t matter. DC has begun to move away from the idea of a single canon and will likely tie it all up in the upcoming Batman and The Flash films, which will figure the multi-verse quite heavily. For now this is kind of an alternate reality that can play against the Whedon film in the context of all of that multi-verse stuff that’s coming to both Marvel and DC very soon.

Zack Snyder’s Justice League is presented in a rather oddly chosen full frame 4:3/1.33:1 aspect ratio. I get that Snyder uses this often because of his love of IMAX scenes, but this release is not likely to ever be released on IMAX screens, and I don’t get the sense that this has the appropriate resolution. I can’t image what this was like to watch as a streaming film. The HDR and increased bitrate of an average of nearly 70 mbps are absolutely necessary to keep this ultra-high-definition image presentation from being unwatchable. Snyder doesn’t disappoint in his use of darkness here. Shadow definition is strong here, but was it online? There is little to no color here. Even elements that should be vibrant and vivid are severely desaturated. Mera’s hair, which is bright fiery red in the comics, and Aquaman film, is practically auburn here. While the costumes give off a rather nice organic texture here, there is no splash of color to be found. The film is pretty much monochromatic, and while I’ve heard Snyder express an interest in a black & white version, I’m not sure why he didn’t just do that here. This film is about as colorless as you can get.

The Dolby Atmos presentation defaults to a sometimes frantic 7.1 track. This version is going to give you much fuller subs that drive the action directly into your home theatre. There’s enough deep rumble happening here to get your heartbeat up a few beats, to be sure. Still, the dialog remains nicely intact and well-placed. The score is often a loud affair that punctuates the action, with each hero getting a distinctive theme.

The Road To Justice League: (24:40) This is the only feature and found on both Blu-ray and UHD versions. The UHD version is not 4K, and no HDR. For some odd reason, it’s on the first disc of each, not the second. I can only speculate it was a bandwidth thing, as it really belongs on the second disc. Plenty of behind-the-scenes footage and cast and crew offer a ton of insight, but it’s mostly a mutual admiration society meeting. Zack Snyder is the focus of the feature and pretty much leads the conversation.

Fans clamored for this film, and now they have it. I’m not sure it answered many of the flaw concerns, but I will admit it’s a better film. Mostly that has to do with a single voice. The 2017 film was doomed having two very different people dealing with the director duties. A Snyder accolade would have been a better choice. Two directors. Two vastly different approaches to the material. “What could possibly go wrong?”

Gino Sassani is a member of the Southeastern Film Critic's Association (SEFCA). He is a film and television critic based in Tampa, Florida. He's also the Senior Editor here at Upcomingdiscs. Gino started reviewing films in the early 1990's as a segment of his local television show Focus. He's an award-winning recording artist for Omega Records. Gino is currently working on his 8th album Merchants & Mercenaries. Gino took over Upcomingdiscs Dec 1, 2008. He works out of a home theater he calls The Reel World. Favorite films: The Godfather, The Godfather Part II, The Body Snatcher (Val Lewton film with Karloff and Lugosi, not the pod people film), Unforgiven, Gladiator, The Lion King, Jaws, Son Of Frankenstein, The Good, The Bad And The Ugly, and Monsters, Inc.
Habit (Blu-ray) Cry Macho