Posted in: No Huddle by Brent Lorentson on October 5th, 2021 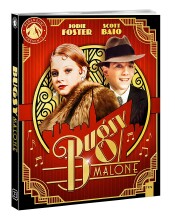 To watch Bugsy Malone you’ve got to remind yourself what it was like when you were a kid, and that’s something I feel is the most difficult thing to do when kids today have video games, the internet, and so much technology at their fingertips that to play and pretend is just not what it used to be. In 1976, writer and director Alan Parker gave us a gangster film like no other; it was a musical and a parody and most importantly was completely cast with children, all around the age of 12. It’s hard to imagine a film like this could ever take place now, not that there is anything offensive about it, but the film’s charm and its innocence I just feel couldn’t be captured anymore. The idea of kids shooting one another with guns firing marshmallows and cream would certainly rile up parents, not to mention the “sarsaparilla” bootlegging going on. Alan Parker took a risk with this film, and though it wasn’t a success in the states, it’s developed a cult following over the years. For me this was one that I discovered on VHS not long after seeing Warren Beatty take on the role of Dick Tracy and thus kicking off my love for prohibition-era gangster films.

Scott Baio plays the title role of Bugsy Malone, a hired hand who will do a job for the mob if the money is right, but if anything he’s more of a romantic than any good at playing the heavy. He’s got eyes for Blousey (Florence Garland), a lounge singer who has big dreams of making it to Hollywood. The relationship is charming and relatively innocent throughout, and mostly it works because it’s a pair of kids in these roles. It makes it easier to embrace these notions of big dreams and Bugsy’s grand gestures of them travelling together to Hollywood, but he just needs to do one big job first.

Fat Sam (John Cassisi) runs a speakeasy that Bugsy frequents, and Sam also runs his business out of the club. He’s “Da Boss” but he’s having issues with a rival gang in a war over “splurge guns”, basically guns that fire marshmallow cream. Obviously those who control the guns control the town, but Fat Sam is losing men, so he enlists the aid of Bugsy. Sure, it sounds like a tired and overused plot trope, but this again isn’t meant to be taken too seriously. As if to remind the audience, even the musical numbers are dubbed with adult singers singing the songs.

What’s most impressive about the film is the presence of Jodie Foster playing the role of Fat Sam’s lounge singer girlfriend Tallulah, who also has a thing for Bugsy. Foster took the role right after filming Taxi Driver, and her talent just shines and pretty much outclasses everyone else on screen. While the cast surrounding Foster seem to be kids pretending to be adults, Foster has a presence that just seems more mature. (Cnsidering her role as Iris from a character standpoint, it seems she aged a decade.)

The film just reeks of charm in the best way. From the cream pie fights to the bike-pedaled car chases to the dance and musical numbers, it’s difficult to not watch this with a grin and think how the kids must’ve had a blast making this film. Sure, it feels dated, but it has style, and that charm factor works wonders on its audience. For fans of musicals, I’m sure you’ll appreciate that many of the musical numbers were written by Paul Williams, who is responsible for Phantom of the Paradise and The Muppet Movie.

Brent Lorentson is a horror writer and film critic based out of Tampa, Florida. With a BA in Digital Film, he co-wrote and co-directed Scavenger Hunt. His short stories have appeared in various horror anthologies. In 2019 his short script Fertile Blood will be a part of the anthology horror film Slumber Party. He is currently working on his first novel A Dark and Secret Place set to be released in late 2019. Favorite Films: Taxi Driver, Fight Club, I Saw the Devil, The Wild Bunch, Dawn of the Dead, A Clockwork Orange, Pulp Fiction, Heathers, The Monster Squad, and High Fidelity.
The Forever Purge (Blu-ray) Exclusive Interview With Ryan Kruger: Director/Writer Of Fried Barry