Posted in: Disc Reviews by Brent Lorentson on October 2nd, 2021 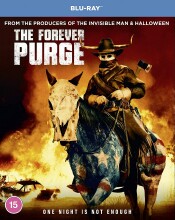 Ever since The Purge came out back in 2013, I think with each passing year it seems like it can become a terrifying reality. Some fans, I’m sure, have even thought about what deviant activities they’d get into or how they’d defend themselves if it ever became a reality. The films in their own blunt way have been an examination of our government and how society is treated by class and by race. It’s not a big surprise that these films have been hits at the box office, but my big complaint has been are they really horror films?  For me they are just modern takes of a world that John Carpenter created with his Escape from New York and Escape from LA films, like a hard-edged dystopian sci-fi survival film. At least with the first installment The Purge felt more grounded as an intense home invasion film, but as the sequels followed and the world opened up, it just started to feel more like an action film. Suspense and atmosphere have been replaced by gunfire and over-the-top costumes, and it’s just lost its impact.  But then this idea of The Forever Purge came along, the idea that the bloodshed and chaos doesn’t have to end, that the government has lost control, and the blood thirsty lunatics have taken control. This direction seemed to offer some potential. The bleakness could be a sobering look at what could occur.

The film opens with a family sneaking across the border for a potential for a new life in America, a family seeking to live the American dream and flee the violence of the cartels and no longer live in poverty. Things then shift a year later, and we’re on a ranch in Texas. The ranch is run by the Tucker family and has its share of Mexican ranch hands.  There’s a little tension between the son Dylan (Josh Lucas) and Juan (Tenoch Huerta), who seems to be better at handling the horses than the good old Texan cowboy. At first glance it seems like simple racism, but later in the film the two end up discussing their differences, and we see it’s a little more complicated, but at least doesn’t come from a place of hate. Honestly, I wish this was explored more. Even if it is a touchy subject, I felt it at least showed how discrimination and culture clash doesn’t necessarily have to come from a place of hate. Of course we know these two will need to set aside their differences in order to survive, but really, there is never any tension between these two again, which I found little frustrating.

By now we know the formula for these films, the families seeking shelter as the purge lockdown is about to begin, and of course chaos unfolds. The first portion of the film is about that, but of course this time around there is a group of people who are not willing to call it quits after just one night. Instead this group wants it to continue as a way of purifying the country. This seems like the most realistic approach; after all, I never could understand how the government could just easily calm down a nation that was allowed to rape, kill, and plunder without consequence, and then suddenly everyone would behave once the 12 hours were up. We all remember the riots last year, and we saw how hard those were to control. Now just how this movement occurs in the film where so many people across the nation are organized and ready to not end the purge, well, it’s a bit unrealistic. While director Everardo Gout handles shooting the chaos and the violence is fresh, and I appreciate the kinetic energy he brings these sequences, they lack emotional depth.

We have Dylan trying to keep his pregnant wife alive in a race to get across the border, and Juan is trying to keep his wife alive, though to be fair, Adela (Ana De La Reguera) is more of a badass than everyone else in the film. Not once to we ever feel like there are any real stakes. That’s the biggest reason why I find it hard to call this a horror film.  There is never a moment where I felt like any of the core characters were ever in peril.  Despite being a movie about a country under fire with no rules and blood thirsty maniacs everywhere, we never actually get to see the maniacs come out to playSure, there are plenty of racists, but this just feels so tame. We should be clutching the seats every second fearing for this unborn baby and these survivors, but there is simply no tension.

With talks of their being another Purge film in the works, I just hope they skip the action and go for something with more menace and more bite. These shouldn’t be fun action films we’re cheering for; they should terrify the audience and have us scared of the possibility of it becoming a reality.

The Forever Purge is presented in the aspect ratio 1.85:1.  The 1080p image is arrived at with an AVC MPEG-4 codec at an average of 34 mbps.  Making the change to have this film take place in the daytime helps this film look better in quality. There are a lot of warm tones, and we get to see more color and detail, which is beautiful captured. The desert landscapes in the third act of the film look great. Some of the CGI is more obvious in the daylight, for instance with many of the fires and aerial shots where we see the city in turmoil. The vibrancy in the color is a bit dulled down, which is nice after seeing the previous movies where neons seemed to just pop. The look definitely separates itself from the previous films, and it is a nice transfer for this release.

The 5.1 Dolby Atmos track gets a lot of work when it comes to ambient and background noise. I like how the audio immerses the audience with the constant gunfire, sirens, and just numerous sounds that reflect the chaos of The Purge. The audio is clean,, and I like the use of multiple languages. The score is subtle but definitely makes an impact.

Alternate Opening: This is shown in storyboards and offers up an opening that would have offered up more action.

Deleted Scene: There’s only one scene, but it’s one that it’s understandable why it was cut.

Collapsing the System: Behind The Forever Purge: (8:00) Your standard BTS look for the film that mostly discusses the decision to bring in a Mexican director and how big of a deal it was to shoot in the day time for the first time with The Purge.

Creeptastic Wardrobe: (2:06) A brief look at the wardrobe and masks used in the film this time around.

I get why people like these films, and they are fun, but that’s kind of my issue with them. Should a film about being able to murder and commit crime without consequence be a fun romp?  I want to see a more emotionally grounded take, one that shows the mental, emotional, and physical damage participating in The Purge will cause. I have nothing against over-the-top violence, but don’t try to preach or have a message when you want to criticize politics but have no shame in displaying senseless violence.

Brent Lorentson is a horror writer and film critic based out of Tampa, Florida. With a BA in Digital Film, he co-wrote and co-directed Scavenger Hunt. His short stories have appeared in various horror anthologies. In 2019 his short script Fertile Blood will be a part of the anthology horror film Slumber Party. He is currently working on his first novel A Dark and Secret Place set to be released in late 2019. Favorite Films: Taxi Driver, Fight Club, I Saw the Devil, The Wild Bunch, Dawn of the Dead, A Clockwork Orange, Pulp Fiction, Heathers, The Monster Squad, and High Fidelity.
Batwoman: Season 2 (Blu-ray) Bugsy Malone (Blu-ray)