Posted in: The Reel World by Gino Sassani on November 6th, 2021 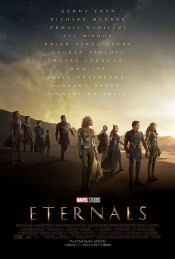 “So now that Captain Rogers and Iron Man are both gone, who do you think’s gonna lead the Avengers?”

After over a decade of ruling the feature film comic book universe, I have to ask the question that no one really wants to ask or answer. A lot of things have happened in the real world since the release of the two-part Avengers coda to the last phase of films. In over 22 films, there were only a couple I would have called sub-par and less I would have called stinkers. That hasn’t been the case with the start of the post-pandemic Marvel Cinematic Universe. It started with Black Widow, which I have argued doesn’t belong here. It works as the third film in a trilogy that includes the last two Captain America films. It has the same feel and much of the same style. I liked it but felt it was horribly mistimed. Things being what they are, that might be expected. Then came along Shang-Chi And The Legend Of The Ten Rings, which brought an interesting new dynamic to the MCU but still fell somewhat flat with fans. If you were into their martial arts comics, it might have felt better. The f/x and world-building were incredible, but the film just never connected with me. Now Eternals brings that same feeling of disconnect, and it’s a troubling sign for the Marvel stranglehold on comic book feature films.

The film jumps back and forth through time, spanning millennia. The Eternals have been sent to Earth 7000 years ago, arriving back in the earliest days of civilization. In a 2001: A Space Odyssey fashion, they appear to guide the development of the humans and believe that is pretty much the reason they were sent. They eventually learn that wasn’t why they were brought here, but more on that later. After battling the evil Deviants, a race of creatures that threatens worlds throughout the galaxy, the Eternals believe their task is done, and they separate to live immortal lives through the history of the Earth.

There are ten powered heroes in the group: Ajak (Hayek) is the maternal leader of the group. She has direct access to the intelligence that has guided them to Earth and alone must deliver these thoughts to the group. The kind of second in command is Ikaris (Madden). He can fly and shoots power beams out of his eyes. Think Cyclops without the visor. He’s the headstrong one, and the most dangerous, to be sure. His motives are often questionable. His love interest is Sersi (Chan), who can control the makeup of matter. She can turn coal into gold or whatever else she might want or need it to be. They used to be a couple, but she’s more into the human Dane (Harrington). Angelina Jolie plays Thana, who can create energy weapons in her mind and wield them with superior fighting skills. Kingo (Nanijani) who has become an action movie star and can throw forceful projectiles in battle. He’s wanting to film a documentary on the Eternals and brings along a producer and camera. He’s the comedy relief at times. He’s the guy who doesn’t always take things as seriously as he should. Phastos (Henry) has super brains and is a brilliant engineer who can dream up and then build whatever technology might be required. Sprite (McHugh) is a shapeshifter who can alter reality around her. She’s just a kid and wants very much to just be a human girl. Makkari (Ridloff) is a speedster, and may I say that this film provided the best representation of a speedster in action I have ever seen. It was the single most impressive part of the film for me. It’s brilliantly handled. Druig (Keoghan) can control minds. Gilgamesh (Lee) is just plain super-powered. He can smash anything.

You begin to see the big problem already. There are just too many characters here, even in a film that runs just under three hours. There is not only a large cast to develop, but they keep going back and forth in time to try to build a back story, but there just isn’t enough time for any of it. If only Marvel had stuck to their own plan. You can only introduce so many characters and events at once. I would have started with their arrival 7000 years ago to beat up the creatures. That alone would have made a satisfying movie. But Marvel tried to do way too much at one time. There are times even I got lost, and I can usually keep up with these things. Most in the audience will simply give up trying to get it and just try to enjoy the ride.

That’s the only way the film works. That means don’t try to fit it into the MCU. Stop it with the references to The Avengers and their fight against Thanos. If you guys were here, why didn’t you try to help then? Yeah, they gloss over an explanation, but it really doesn’t fly. I would have been happier with a tangent from the MCU that holds some of these super beings.

In the present day the team discovers that the Deviants are still here, and they must get the band back together to stop them. But that’s when they find out they were lied to about their mission, and so a Civil War between the members erupts with each having to decide if a world is worth sacrificing for potentially many worlds. The final battle is the most entertaining part of the film, but none of it holds together. I think Marvel needs to take a step back and remember what made them better than the likes of DC (with the notable exception of the first Wonder Woman). If the rest of this phase goes pretty much like these last two films, the ride might just be over, and all of these future ambitious plans might come to more of a screeching halt than even a pandemic could achieve.

Stay for the two stingers. There is another long-forgotten Marvel character that is going to be launched through this film and another. I don’t expect you’ll see The Eternals again anytime soon. I just hope it’s in time to do the kind of course-correction Marvel needs. They need to stop asking themselves how long they can virtually continue to print money, but rather, “How long do we have?”

Gino Sassani is a member of the Southeastern Film Critic's Association (SEFCA). He is a film and television critic based in Tampa, Florida. He's also the Senior Editor here at Upcomingdiscs. Gino started reviewing films in the early 1990's as a segment of his local television show Focus. He's an award-winning recording artist for Omega Records. Gino is currently working on his 8th album Merchants & Mercenaries. Gino took over Upcomingdiscs Dec 1, 2008. He works out of a home theater he calls The Reel World. Favorite films: The Godfather, The Godfather Part II, The Body Snatcher (Val Lewton film with Karloff and Lugosi, not the pod people film), Unforgiven, Gladiator, The Lion King, Jaws, Son Of Frankenstein, The Good, The Bad And The Ugly, and Monsters, Inc.
Don’t Breathe 2 (UHD Blu-ray) (4K) The Honeymooners Specials: A Christmas Carol