Posted in: The Reel World by Jeremy Butler on November 20th, 2021 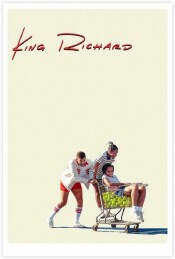 “Venus Williams is going to be the number 1 tennis player in the world. Absolutely. But you are going to be greatest of all time.”

He was a man with a plan. A 78-page plan, if you want to be exact. We’ve heard the story of Venus and Serena Williams, two sisters from Compton who went on to become two of the greatest tennis stars in the world. Now we will learn the story of the man behind the two tennis legends. Their father, Richard Williams, or as the title says, King Richard. But who could we trust to properly represent the story, and more importantly, who could embody the man? A man who is rapidly becoming a legend in his own domain. In fact, his name and legacy were recently solidified on a soundstage at the Tyler Perry Studio in Atlanta: Will Smith. Now, Will Smith is not a character to be disregarded. This is a man who has found a way to dominate everything that he has ever chosen to do. Music, television, and film. I mean, the guy even tried his hand at stand-up comedy. He has a whole slew of accolades to his name, but there is one thing that has managed to elude him. One award that he has yet to capture despite being nominated multiple times. Quite possibly the most prestigious award that could be bestowed on an actor. The Oscar. Will King Richard be the film that gets him this coveted award? We shall see.

“Venus and Serena gonna shake up this world.”

And that they did. However, before we get into that, the film takes you back to the beginning. Not the very beginning, but early enough in the journey that you get a sense of the level of dedication it took to accomplish what they’ve accomplished. Not just their dedication, but their father’s primarily. As the film opens up, we see the extent of his dedication through a montage of meetings with affluent people as he looks to secure sponsorship for them. As you can imagine, people were not quick to take a chance on two prospects who were not privileged with the same advantages as some of their competitors. Despite this, Richard never wavers in his belief in his children. In fact, he remains a consummate source of encouragement for not just Venus and Serena, but the four other children who he and his wife are raising in Compton.

The perfect example of this dedication to family is featured prominently the promos for the upcoming movie, when Richard arrives home and to find the police performing a wellness check. He’s questioned by the social worker, who questions why the girls were practicing in the rain. Without fail, Smith delivers a power monologue where he points out the harsh reality that awaits parents who lack the same dedication that Richard shows to his family. It is also during this sequence that we get to see the quiet strength of Aunjanue Ellis’s performance as the girls’ mother, Oracene Price. When she confronts the person she believes responsible for the police visit and delivers a veiled threat, she makes herself just as significant a figure as Smith in my eyes.

This quiet strength continues throughout the film, as Ellis’s character on more than one occasion stands up to Smith’s Richard and makes it clear that while she is dedicated to him, she is more dedicated to their children.

Now that is not to say that Richard was all good or all bad. That was something that I found the film managed to balance very well. On the one hand, he was a determined father, but not only to make his daughters successful. It was also important in his eyes that they maintain a level of humility. This is shown when he attempts to impart an important lesson to the entire family. Of course, this came after he attempted to leave them at store located three miles from their home. As I said, there was a balance to him. The film does a great job capturing his dedication, but also his ego. To that end, the film does not shy away from the darker elements of Richard’s personality. For me, that made the story more grounded and easier to accept. It wasn’t a puff piece. It was an honest portrayal. They didn’t just showcase all the good and sweep the bad under the rug. They made a true and honest portrayal. While I don’t doubt that there were certain elements of the story that have been sensationalized for the purpose of making this biography more exciting, it was done in a way that was believable. This most likely had something to do with the fact that the film had the benefit of being able to rely on firsthand accounts from the tennis pros themselves.

I would be remiss if I simply focused on Smith’s and Ellis’ portrayals and not speak about the two young ladies who embodied Venus and Serena. One (Saniyya Sidney) I knew I recognized but was unable to place at the time of viewing. I did learn later about her performance in Fences, which garnered her a Screen Actors’ Guild award nomination. Such capability made her just right to take on the role of Venus. She brings determination, as well as a hint of vulnerability as we watch her nervously enter this new world. While Richard Williams is the film’s focal point, the timeline of events follows Venus’ journey from prospect to her pro debut. Sidney shines with the emotional vulnerability she brings to the role. This is not to disregard Singleton, who may not have had quite the same resume, but is far from a character who fades into the background. We only get glimpses of her character’s journey, but it is no less significant.

I suppose the big question on everyone’s mind is whether this the performance that will bring Will his Oscar. In answer, I have my doubts. That is not a knock on Will’s performance. If it were up to me, I would give it to him. I think he perfectly encompasses the character to the point that I couldn’t separate the two. I’m just not sure if the movie is enough to bring him the prize. It is extraordinarily difficult to bring home an Oscar. It took Denzel years and a lot of picture-perfect roles to get one. In the end, it took him going against his usual typecast as the good guy and playing the bad guy before he was given the highest honor. In Will Smith’s case, I think to capture it, he will need similar circumstances. This biographical film, while great, is not uncharted territory for the actor. I have no doubt that it can garner him a nomination. And in the event that it does, I hope my assessment is wrong, and he receives it. Nothing would make me happier. In my eyes, he deserves it.

Jeremy Butler is a film school graduate of the International Academy of Design and Technology. He is been writing for Upcomingdiscs since 2012; however, movies have played a big part of his life for much longer. Favorite genres include horror, science fiction/fantasy, and comedy. Favorite movies are V for Vendetta, Boondocks Saints, Kiss Kiss Bang Bang, and The Godfather.
Batman: Year One – Commemorative Edition (UHD Blu-ray) (4K) DC’s Legends of Tomorrow: The Complete Sixth Season