Posted in: Disc Reviews by Jeremy Butler on November 20th, 2021 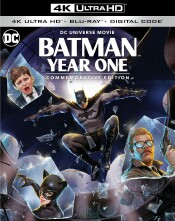 I will say this for DC animated movies, they sure do pack a lot of story in their limited runtime. This film is only an hour, and somehow it felt like two and half hours of storytelling were comfortably fitted into that time. I know stories that don’t accomplish half as much with double the time. That is an accomplishment in itself. This re-release brings back the 2011 animated film based on the four-issue story arc of the same name. It’s a bit of a origin story, encompassing Batman’s first year operating as the Dark Knight at the height of corruption in Gotham. It is also a bit of a origin story for Batman’s nemesis turned ally, James Gordon, who wages his own war against the corruption in the police department. I remember watching this a few years ago, and it didn’t really hold my attention. However, on this outing, I was thoroughly engaged and entranced by the story. That just goes to show you that first impressions can change.

Told on two fronts, the film follows a returning Bruce Wayne as he comes back to Gotham after a 12-year absence. Bruce returns with a mission, to save the city that birthed him and took away his parents. On the other front, we have Lt. James “Jim” Gordon, a Chicago cop transferring to Gotham. Upon arrival, he finds the city to be rife with corruption all the way up to his boss, the Chief of Police. Despite this, Jim endeavors to do the right thing and clean up the city.

Both men have the same goal, but different methods for getting it done. For Gordon, the only way to affect change is from within. However, Bruce recognizes that to stop lawbreakers, he himself will have to act outside the law. When exploring these two different sides, I found that the two perspectives were an excellent way to ensure that both points of view were being captured. Kind of like two sides of a coin. Watching how each of them dealt with the complications of their endeavors, usually the same complications, made for compelling storytelling.

Speaking of the source material, given that story is drawn directly from comics, an obvious question is how closely does it follow the comics. I am in no way an authority on this, but I’d say it was very faithful to its origins. It’s been my experience with animated films derived from comics, that they tend to be more aligned with their source materials than live action films.

In reference to the two storylines, I’ll say I found them to be well-balanced. That said, I will say that the Gordon storyline resonated more with me. It could be because the tale of Batman is something I grew up with and have seen many incarnations of, whereas Gordon is someone I knew but did not strictly follow. Year One presented me with an opportunity to learn more about the character. Like the fact that he is highly principled, but he is not without his flaws, clearly shown by his infidelity. What I was drawn to was how conflicted the character is. He has a deep desire to do things the right way, but that desire is in conflict with his need to do the right thing. It makes for a very compelling character.

Batman: Year One is presented in its original aspect ratio of 1.78:1. The ultra-high-definition image presentation is arrived at with an HEVC codec at an average of 55-60 mbps. With so little on the dual-layer UHD disc, I expected the bitrate to ride a little higher. The disc only has about 64 minutes of content. That might not have really made a difference. This was an earlier film in the DC Animated Universe and it is much lower in its budget than these films later used. Still there is some expansion of the image here, and I certainly would encourage Warner Brothers to take the time and resources to eventually get the entire series of films in 4K. With that said, you’re going to see a pretty nice bump in the black levels, with deeper blacks and better shadow definition. The edge issues are now cleaned up, and I suspect some of the colors pop just a little better. Bear in mind this is a dark and gritty atmosphere going here, and you should not be expecting vibrant colors. I’m sure this is pretty much as good as the 2K source material in every way.

The DTS-HD Master Audio 5.1 track is pretty much the same as the Blu-ray and likely the original release. It’s dynamic enough, but it’s not going to stand out anywhere in the film. The subs don’t really deliver, and you can expect it all to stay pretty much in service to the dialog.

All Extras Are On The Blu-ray Disc.

Reinventing Gordon (21:58): An in-depth look into Batman’s greatest ally in the battle for the soul of Gotham. This featurette gives you everything you need to know about the principled character who stands for law and order, but also recognizes the need for someone like Batman in order to establish order. The featurette shows multiple incarnations of the character, from the comics to the small screen with the Gotham series, and the silver screen.

A Conversations with DC Comics (39:27): This is a truly worthwhile featurette. An opportunity to observe a conversation with the people that helped shape the Dark Knight, from the writers of old to the new school.

A Heart of Vengeance (23:25): A very informative featurette that highlights the Dark Knight’s return to his dark past following a period of lightheartedness that nearly resulting in the cancellation of the series. Within this featurette, you will see the transformation that was undertaken in order to restore the iconic hero to his former glory.

DC Showcase: Catwoman (14:50): Without a doubt, my favorite addition to the special features. An animated short following Selina Kyle as she attempts to bring down a smuggler. This is a short that should not be skipped, as the Selina Kyle in this short is far more intriguing than the one featured in full-length movie.

I really glad that this film came across my desk. It allowed me the opportunity to re-evaluate a film that I did not care for the first time around and see that the reason for that may have just been an issue of timing. Upon further examination, Batman: Year One is a very enjoyable and intriguing story. Granted, I think it would have been better with the Catwoman from the DC Showcase short in my mind.

Parts of this review were written by Gino Sasssani

Jeremy Butler is a film school graduate of the International Academy of Design and Technology. He is been writing for Upcomingdiscs since 2012; however, movies have played a big part of his life for much longer. Favorite genres include horror, science fiction/fantasy, and comedy. Favorite movies are V for Vendetta, Boondocks Saints, Kiss Kiss Bang Bang, and The Godfather.
The Colony (Blu-ray) King Richard (2021)