Posted in: The Reel World by Jeremy Butler on November 25th, 2021 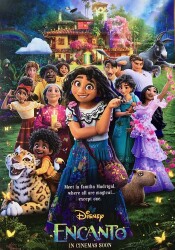 Good story, unique characters, and original music. I’d say that Disney delivers on its 60th animated movie. In recent years, Disney has taken us all over the map as they introduced characters (formerly known as Disney princesses) from all different walks of life. From a Norwegian-inspired kingdom (Arendelle) to the Polynesian island (Motunui), this time taking us to the mountains of Colombia. That has always been something that I appreciated about Disney’s film: their wide-reaching landscape. It’s like the cinematic version of Epcot. Another thing I’m grateful about this film is the fact that I was about to make it a family affair, as my wife and daughter joined me for this experience. It’s been a while since we’ve had a film where we could seek the Nalyce stamp of approval, and now we finally have a candidate. Bottom line up front: it did get her stamp of approval, as well as mine.

Encanto tells the story of a family called the Madrigals, who live in an enchanted town in the mountains of Colombia. When they come of age, every child in their magical house has been granted a unique ability such as strength or healing powers. Every child but one. Mirabel, the only ordinary Madrigal, discovers that the magic is under threat, and she may be the only one able to save it.

So the film really leans into idea that it isn’t your power that makes you special, but what you do with it. This makes Mirabel, the powerless person in the family Madrigal, the most suitable character to deliver this message. Throughout the film we watch her struggle with feelings of inferiority over the fact that she did not receive a power (what the family refers to as a gift). Despite this harsh reality, she remains a truly pure character. This is most evident when she puts aside her own jealousy to be there for her cousin when it is his turn to gain his gift. At no point does she display bitterness or rage over being excluded. We know she is possibly feeling these things internally, but for the sake of her family, she conceals these things. Even more to her credit, when the opportunity to protect her family and the magic is presented, she does not run away from the responsibility. She faces it head-on. For me, this was a wonderful thing for my daughter to observe. It allowed me to impart a invaluable lesson on to her. After the movie was done, of course.

Disney gathered some talent for this one. Several members of the cast I’ve been a fan of for many years, faithfully watching them in their other projects. First up, Stephanie Beatriz of Brooklyn Nine-Nine fame. Now here is someone that I’ve been huge fan of. Her stint as the tough-as-nails Rosa Diaz on the aforementioned series has always been one of the biggest draws for the show. Here she shows her range, embodying a character who goes against what I am used to seeing from her. Here as Mirabel, she had to be vulnerable, a task that she mastered very well, as I didn’t even recognize it was her until the saw her name in the credits. Then there is Diane Guerrero, also known as Jane from Doom Patrol. Again, I did not recognize her until the credits roll, which is something I really appreciated, because it shows me their range as actresses. I have them pegged one way in my mind, and in this film, they showed me that they aren’t relegated to just one type of character.

Then there was a voice that I could never mistake. I’m not sure any of us can. John Leguizamo. Here as the family outcast, he plays to his strengths as a character that is a little strange and a bit quirky. Granted this is not out of his wheelhouse; it was a character that brought a great deal of comedic relief to the film, which was a much-needed addition to the film.

Nalyce was enchanted with the movie to say the least. As we left the theater, she spoke about Mirabel, her favorite character, and how she managed to be hero despite there being a character that actually had super strength. She liked that the most important thing in the world to Mirabel was her family. She really resonated with the character, and I believe she really felt Mirabel’s pain when they both discovered simultaneously what the potential threat to the family magic was. As this idea played out, I could see her leaning in closer, fully engaged. I couldn’t ask for more than a movie that not only holds her full attention, but also imparts some valuable life lessons to her.

My wife was thrilled as well. She isn’t quite as descriptive as my daughter, so we will just jump into my thoughts. I found it to be a very worthwhile experience. The music, particularly the song describing the family’s abilities, was very clever and catchy, as well as Luisa, Mirabel’s older sister’s song were among my favorites. If I had to choose, I’d leaned more towards Luisa’s due to how it speaks to her outward projection of power, but also confesses her inner struggle. I really enjoyed how the film tackled several real issues in a way that was easy to relate to.

Encanto releases this Thanksgiving weekend, and I know that we all have turkey carving to do. However, I am going to urge you all not to miss out on this worthwhile experience for the entire family. Disney’s 60th animated film is enchanting, relatable, and most importantly, it’s entertaining for the whole family. It definitely was for mine.

Jeremy Butler is a film school graduate of the International Academy of Design and Technology. He is been writing for Upcomingdiscs since 2012; however, movies have played a big part of his life for much longer. Favorite genres include horror, science fiction/fantasy, and comedy. Favorite movies are V for Vendetta, Boondocks Saints, Kiss Kiss Bang Bang, and The Godfather.
It’s a Wonderful Life 75th Anniversary Collectable Blu-ray Set (Blu-ray) Holiday Gift Guide Spotlight – Warner Brothers – Middle Earth Ultimate Collector’s Edition (UHD Blu-ray) (4K)