Posted in: Disc Reviews by Gino Sassani on November 25th, 2021 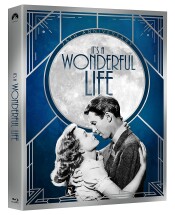 “Strange, isn’t it? Each man’s life touches so many other lives. When he isn’t around he leaves an awful hole, doesn’t he?”

Another holiday season and another release of the classic It’s A Wonderful Life. This edition looks like a storybook case and has both the restored black & white version as well as the recent colorized versions of the films. If you have one of the UHD 4K collections, you pretty much have the definitive version of the film, and the audio and visual aren’t likely to get any better than that. But there are many of you out there who have not made the switch to UHD. This is likely going to be that best ever release for you. You get two versions of the film in an attractive and safe case.

Every generation has had its Christmas classics, films that have become as much a part of the holiday family traditions as Christmas trees and candy canes. For me it has been the more modern A Christmas Story with ol’ Carl Kolchak himself, Darren McGavin. Kids today have taken more of a shine to even more recent films, but for more than one generation, Christmas wouldn’t be the same without Frank Capra’s It’s A Wonderful Life. Since 1947, the film became a seasonal fixture in neighborhood movie houses across the fruited plain. In the 1970’s the film temporarily fell into the public domain and was played relentlessly on local television stations as each holiday came and went. Unfortunately, these were usually prints in horrible condition, so that scratches and splice marks became a part of the experience, not to mention ads for department stores touting their early bird specials. It is with that experience that I as did most from my generation become acquainted with Jimmy Stewart’s George Bailey. When the home video market began to bloom with VHS in the mid 1980’s, a better print resurfaced, so that the experience improved dramatically, along with the loss of those commercials. Of course, this new resource of home entertainment created a fight for the rights to the film to once again be restored to a single owner. It ended up being the film’s score that would allow the rights to be enforced once again. The crappy television prints disappeared, and by the early 1990’s, efforts to restore the film began.

These restoration efforts invariably turned to the controversial subject of colorization. If anyone remembers Ted Turner’s push to colorize RKO films, including King Kong, you will also remember how bad those films looked. The color was an added texture of hue covering the picture so that the subject’s textures and subtleties were obliterated. It was almost as if some child decided to finger paint all over the negative. There was nothing magical or at all realistic about the process. It’s A Wonderful Life has been colorized no less than three times. In both 1986 and 1989 the film got the colorized treatment, both failures. Now in 2007 It’s A Wonderful Life has been colorized by a new process developed by Legend Films. This new process allows films to be colorized naturally, retaining all of the detail and texture of the original print. These are the guys who are working with legendary Ray Harryhausen to colorize and restore many of his classics. The new process uses a 16-bit grayscale which offers over 64,000 shades of just gray. The process, called “Photo-Real”, can reproduce HD quality pictures with stunning life-like color. I was a very cynical skeptic of the process and was prepared to rip this color print to shreds in my review. I was blown away by how natural the color looks. You will be hard pressed to believe this wasn’t an original color print. Not only are the colors realistic, but the print retains the particular color palette of the 1940’s, so that the film still looks like one from the correct era. I know you’ve seen incredibly bad colorization before, and it likely has made you unwilling to even give this one a chance, but you owe it to yourself to check it out.

In case there is still anyone in the world who is unfamiliar with the story, let us briefly visit said tale. George Bailey’s life has been fraught with bad luck. The family business has kept him from pursuing an education, and he has been trapped in his small town of Bedford Falls. He has constantly given up his own dreams for others. As a local banker, George has helped pretty much everyone in his town, fighting to keep the town’s finances from falling into the hands of the obvious Scrooge character, Henry Potter. When Potter manages to get his hands on the bank’s receipts, George is in real trouble, facing ruin and likely prison if he can’t come up with the money. Driven to despair, George heads to a local bridge with the intent of killing himself when he is intercepted by Clarence. Clarence, it seems is a guardian angel in training. If he can help George out, he’ll earn his wings and become a full-fledged angel. Since George argues that Bedford Falls would be better if he’d never been born, Clarence allows him to see life in Bedford Falls if George hadn’t come along. Bedford Falls is now Pottersville, and the evil Potter has ruined many a life. George’s journey through this alternate world makes him realize just how much he has meant to the people here. Clarence returns George to his own reality where his new-found faith and confidence are rewarded by all of the folks he has touched for the better.

I’ve recently read The Chimes, a Christmas novella in the tradition of A Christmas Carol, both by Charles Dickens. I have to wonder if the inspiration for this film’s script came from the lesser-known Dickens work. In The Chimes an old man is down and out and is called by the ancient bells of his neighborhood church. One night he follows their compelling voices and meets a litany of spirits. They tell hm he has fallen and died and then show him moments of the future in the lives of those he knew and loved, most particularly his daughter. He’s given a glimpse of what their future would be if he were not there. Sound familiar? If not, then you really need to check out this release. Maybe the story credits should include one Charlie Dickens.

It’s A Wonderful Life is presented in a full frame 1.33:1 aspect ratio. You get two discs here. Both have 1080p images from an AVC/MPEG-4 codec at a bit rate average of nearly 40 mbps. One contains a restored black & white image, while the second gives you the newly colorized version. Both prints are excellent restorations. There isn’t a scratch or print defect remaining to ruin the effect. The colorization process I covered in the text of the review, but I’ll say here again, it is fully natural and true to the film’s era. On both discs essential black levels are filled with depth. Shadow detail is remarkable for a film this old. This is perhaps the best restoration of a 1940’s film I’ve seen to date.

The Dolby Digital 2.0 mono track is faithful to the original material. There are some rather mysterious pops on the disc that I am not sure are a problem with the transfer or simply with the original recording. If the latter is to blame, more careful attention could have been given to eliminate these distracting sounds. Dialog is really what’s important here, and you get every word just fine. The music in the film is a tad rough, but still sounds as good as it likely has since first-run theaters presented the film in 1947.

There really is so much more that can be said of It’s A Wonderful Life. The film has been the subject of many film classes and long-winded thesis papers that there is a wealth of information out there. Again, this is not my favorite Christmas film at all, but I have an appreciation for its place. My mission here is mostly to convince the stubborn among you to give the colorized version a try. I understand the feeling. I have still refused to see the colorized King Kong. But I know what the process back then was like. This new process is another thing entirely. Put this one in your holiday collection, and maybe every year about this time it’ll give you a chance to say, “Merry Christmas movie house…”

Gino Sassani is a member of the Southeastern Film Critic's Association (SEFCA). He is a film and television critic based in Tampa, Florida. He's also the Senior Editor here at Upcomingdiscs. Gino started reviewing films in the early 1990's as a segment of his local television show Focus. He's an award-winning recording artist for Omega Records. Gino is currently working on his 8th album Merchants & Mercenaries. Gino took over Upcomingdiscs Dec 1, 2008. He works out of a home theater he calls The Reel World. Favorite films: The Godfather, The Godfather Part II, The Body Snatcher (Val Lewton film with Karloff and Lugosi, not the pod people film), Unforgiven, Gladiator, The Lion King, Jaws, Son Of Frankenstein, The Good, The Bad And The Ugly, and Monsters, Inc.
Snowpiercer: The Complete Second Season (Blu-ray) Encanto