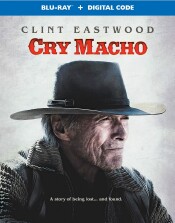 Everyone has one. There is that shirt in your closet. Or maybe it’s a pair of pants, socks, or even shoes. Whatever it is, it should have been thrown out decades ago. There could be holes, and it’s certainly so threadbare that you could do the New York Times crossword through the fabric. It’s not practical, if it ever even was. If it were any other piece of clothing, you’d be embarrassed to be wearing it. But the dang thing is so comfortable. It’s soft against your skin, or maybe it brings back one of your favorite memories. Whatever the reason, you love that thing, and you wish you could wear it all the time. That’s exactly how some of us feel about Clint Eastwood. I was a teen in high school when he asked us if we felt lucky and begged us to make his day. A lot of years and a lot of movies have come and gone since then. Clint doesn’t have the abilities to run around shooting up the joint anymore. His delivery has gotten softer over the years. Face it. Clint has lost more than a few steps. At 91 years of age, it’s somewhat amazing that he’s still directing with the quality he is, and every time he also steps in front of the camera, I’m in the audience saying my goodbyes. But I’ve been saying goodbye since before Gran Torino in 2008. Now it’s 2021, and after Hollywood has experienced its most grueling two years in the last century, it is becoming clear to me that Clint Eastwood isn’t going anywhere. And that makes my day.

Cry Macho finds Clint playing aged rodeo star Mike Milo. His old partner and boss, Howard Polk, played by Dwight Yoakam, has fired him and in a year finds himself back on his doorstep to ask a favor. Polk’s ex-wife and son are in Mexico, and Polk wants Milo to go down there and bring him back. Milo’s reluctant, but the two have history, and he feels he owes him. In Mexico Milo meets the ex-wife, Leta (Urrejola), but she doesn’t have Rafo (Minett). The kid’s a bit of a rebel, out there cockfighting and basically getting into trouble. She’s somewhat mysterious about her interest in his mission, and Milo soon learns that Rafo is really a pawn between the two to be used as leverage for some other business between them. But he quickly bonds with the young man and his chicken (he’s not a chicken; he’s Macho). As Clint tries to bring the boy back to America, he becomes somewhat of a father figure, and they each give each other a new perspective on life that helps each grow. It’s a coming-of-age story not only for the young boy, but for Milo as well, and you’re never sure who is really saving who.

Along the way there are people trying to stop them. Rafo’s mother isn’t quite so willing to let go, and her tactics are nothing short of bizarre. When Milo is able to so quickly find the boy, she even tries to seduce the older man, and it’s an awkward part of the film’s story. I don’t think that character was ever truly developed enough, and the measures she takes don’t quite add up. It’s the film’s only real flaw, but it does get in the way of what is otherwise an extremely emotional journey.

The two find themselves helped out by the owner of a small cafe when their car breaks down and they need to lay low for a while. Milo starts to have feelings for the cafe owner, Marta, played exceptionally by Natalie Traven. The two stay under her care for an extended time, where they actually begin to settle into a life. Milo helps a local horse trader break his wild horses, where he also uses the lessons to teach Rafo about growing up and responsibility. He also has a way with other animals and becomes a kind of unofficial vet in the community where he is beginning to put down roots. This is a wonderful exploration for the film, and it’s really a story that comes out of nowhere and grabs hold of the audience, pulling those heartstrings like Clint hasn’t done for decades. Natalia Travern and Eastwood share some incredible chemistry, and it’s easy to get lost in their evolving story. The writers are smart and let this develop slowly and almost under the radar. It’s a romance story without a lot of frilly romance. It’s just the way I imagine it should be for Clint. Of course, the boy’s story is going to reassert itself, and the pacing here is nothing short of wonderful. It all gets paid off with such a natural flow that you fall into it all so easily …  like a worn, comfortable old shirt.

The Blu-ray comes as pretty much a bare-bones release. I would have liked to have checked out the UHD with some of the wonderful vistas here. You get two short features. One is a pretty standard making-of feature ,while the other focuses on the horses and rooster in the film.

Clint still has it as a director. He is the master of the understated and nuanced story. The score is the typical laid back, simple acoustic guitar kind of thing we’ve come to expect. More than anything, this film is an obvious love letter from Clint to the fans. Much like Robert Redford’s recent The Old Man And The Gun, the film plays out like a greatest hits of 50 years of Clint Eastwood. There are Easter eggs and moments that bring you to these other films throughout, which even includes newspaper clips from Milo’s rodeo-star days that include shots of Clint on horseback from early films and even Rawhide. The score deliberately draws from such favorites as Unforgiven. Cry Macho is a wonderful piece of classic Americana and could not have come from anyone other than Clint Eastwood. If this ends up being goodbye to Clint’s career, it’s a fitting one. I just got tired of calling it. I found myself wishing I was still a 14-year old and could have been Rafo. “It’s every boy’s dream.”

Gino Sassani is a member of the Southeastern Film Critic's Association (SEFCA). He is a film and television critic based in Tampa, Florida. He's also the Senior Editor here at Upcomingdiscs. Gino started reviewing films in the early 1990's as a segment of his local television show Focus. He's an award-winning recording artist for Omega Records. Gino is currently working on his 8th album Merchants & Mercenaries. Gino took over Upcomingdiscs Dec 1, 2008. He works out of a home theater he calls The Reel World. Favorite films: The Godfather, The Godfather Part II, The Body Snatcher (Val Lewton film with Karloff and Lugosi, not the pod people film), Unforgiven, Gladiator, The Lion King, Jaws, Son Of Frankenstein, The Good, The Bad And The Ugly, and Monsters, Inc.
Werewolves Within (Blu-ray) Malignant (Blu-ray)