Posted in: Disc Reviews by Brent Lorentson on December 16th, 2021 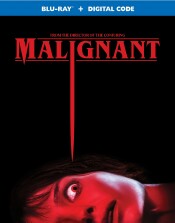 I was disappointed when it was announced that James Wan wouldn’t be returning to helm the third Conjuring film, but when the reasoning was that he had a new original concept to direct, well, it still made me pretty happy. When it comes to the technical side of filmmaking, I feel James Wan is one of the most exciting directors currently working in the industry. What the guy pulls off is impressive mostly because he relies more heavily on in-camera trickery than depending on CGI. Sure, he did Aquaman and is about to do the sequel, but those films aside, he’s pretty much a master of the practical craft who I’d put up there with Hitchcock. So when I saw the trailers for Malignant, I’ll admit I was a bit excited, especially when Wan had said that this was a nod to the Giallo films of the past. But did he deliver?

The first thing I have to say is this film is not a Giallo film, but what it does have in common with the stylized Italian slasher genre is that Malignant IS highly stylized, but it’s more of a hybrid of several other genres.  In many ways this might be James Wan’s best work behind the camera and shows just far he has grown since he made his splash in the industry with Saw. But from a storytelling standpoint, I can understand why it is a film that divides fans.

The film opens up with a doctors frantically trying to sedate a violent child. He causes plenty of physical damage to the staff, but what is also clear is that there is something seriously physically wrong with this child, not just that he’s deformed, but he has the ability to control electrical objects. There’s a lot of kinetic energy in the scene, and it definitely sets the tone of the film, but I feel this sequence should have been cut from the film or simply added to a later portion of the film. It simply gives too much away to the viewer, and the impact of the third act is hindered by it.

As for the main story, we meet Madison (Annabelle Wallis), a pregnant nurse who is in an abusive relationship. After a fight with her husband, an intruder comes into the home and brutally murders her husband and attacks Madison. In the process she loses the baby.  It’s from here things get strange. Madison develops the ability to see her attacker brutally killing other “innocent” people as though she is actually in the room with the killer.

From this point the film is somewhat like a traditional slasher as the police are following a trail of bodies that Madison seems to be connected to, and she knows he goes by the name Gabriel. It’s when we get a look at Gabriel we see that the film shifts and becomes a creature feature, not to mention the amazing feats of strength and ability to maneuver. As the story unravels, it suddenly becomes a strange body horror film that is something out of the early career of David Cronenberg, and by the time the film reaches the third act, it hits a level of violent insanity where you either embrace the bonkers thrill ride, or you just check out. Personally, I loved it; it’s such a unique ride that I was happy that this film took such a wild direction rather than play it safe.

The storyline with the detectives Shaw (George Young) and Moss (Michole Briana White) is entertaining enough to help move the story along, though it’s Shaw’s character who does more of the heavy lifting in regards to the case. His scene where he pursues Gabriel into the Seattle underground is one of my favorite moments, not so much for the performance, but the camera work is simply beautiful. Then there is Sydney (Maddie Hasson), who plays the sister to Madison. She somewhat takes on the final girl duties along with Madison when it comes to uncovering the mystery of Gabriel.

There are some great moments in this film. Seeing the camera work as it tracks Madison overhead as she runs through her house when she is feeling threatened is one of the standout shots of the film, but the visual candy doesn’t stop there. I already mentioned the Seattle underground sequence, but then the final act has a pair of remarkable technical scenes that are just brilliant.

I’m glad before diving back into the water for Aquaman 2 James Wan got back to his genre roots and delivered something fun and unique.  It’s gory, it’s crazy, and it’s a good-looking film, and with talks of a possible sequel, well, I’m curious where they are planning to go with this story.

Malignant is presented in the aspect ratio 2.39:1.  The 1080p image is arrived at with an AVC MPEG-4 codec at an average of 32 mbps.  There is a bit of saturation in the image which has a bit of a blue and green filter added.  The film has a very distinct look with its presentation that gives it a highly stylized giallo look. Where this looks most impressive is in the night shots and in the Seattle underground. The black levels are pushed here where we definitely get definition and detail and the only things hidden (like Gabriel) are by design. The skin tones are a bit lighter, but this is more because of the saturation, and it the image is still nice throughout.

The DTS-HD Master Audio 5.1 track is excellent.  The audio mix between the Foley FX, the dialog, and the score is balanced perfectly. From the gruesome FX with Gabriel when he’s killing and coming to lifeit sounds grotesque in all the best ways here. Sure, the dialog is clear and clean throughout, but really the Foley work and the score are what make so much of this film work.

Malignant: James Wans Visions (14:11) I wish this was so much longer, though this touches a bit on everything from the concept to how they made the film with the special cameras and the awesome practical FX. I just wanted to see so much more of the magic behind the curtain with this film.

While this didn’t make much at the box office due to streaming on HBO Max on the same day release, don’t let the numbers have you thinking this isn’t a good film.  People complain that there is nothing original, everything being a comic book movie or a reboot, but here is something unique that really takes some chances. If you like horror and movies that can take you in some wild directions, Malignant delivers. Besides, if for nothing else, check it out for the wild third act that will have you scratching your head on how they pulled it off.

Brent Lorentson is a horror writer and film critic based out of Tampa, Florida. With a BA in Digital Film, he co-wrote and co-directed Scavenger Hunt. His short stories have appeared in various horror anthologies. In 2019 his short script Fertile Blood will be a part of the anthology horror film Slumber Party. He is currently working on his first novel A Dark and Secret Place set to be released in late 2019. Favorite Films: Taxi Driver, Fight Club, I Saw the Devil, The Wild Bunch, Dawn of the Dead, A Clockwork Orange, Pulp Fiction, Heathers, The Monster Squad, and High Fidelity.
Cry Macho (Blu-Ray) Holiday Gift Guide Spotlight: Warner Brothers Mad Max Anthology (UHD Blu-ray) (4K)