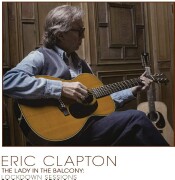 “In February 2021 Eric Clapton’s live shows at The Royal Albert Hall are cancelled due to the global pandemic. Determined to play, he brings his band together in the English countryside. In the absence of a live audience, he decides to record the performances. This film is the culmination of their sessions together.”

You’ve heard the old expression that when life gives you lemons, you make lemonade. That’s what Eric Clapton did when he was unable to give a few concerts he was ready to do. If you’re a performer, you know what it’s like to get all ready to go. There’s just no letting off that energy any other way than to do what you came here to do. Clapton brought the fellas to historic Cowdray House in West Sussex, England. They took over a room in the mansion and set up the gear. That’s how this release begins. We watch the mostly masked technicians, do we still call them roadies? They set up for the audience-less show.

It’s a small acoustic band that gave me flashbacks to his MTV Unplugged performance decades ago. Clapton begins by playing an acoustic 12-string, which I was rather pleased to see. He even managed a few licks on the 12, and that’s something you don’t see often. Leads on an acoustic 12-string guitar aren’t for the faint of heart. He spends most of the show playing an acoustic and picks up his electric for a couple at the end. The choice of instrumentation leads to two very high points in the show. I’ve always liked the acoustic version of Layla. The original is a classic, no question, but the acoustic version has a ton of heart and soul that really reaches me. He does that version here, and I was pleased to learn he has a fondness for that arrangement. So take that, the dozens of band members who have wanted to remove my musician membership for liking the arrangement. There’s also a touching version of Tears In Heaven, written when his 4-year-old son died. The focus of his shows is always his love and skill with the blues, but these were my favorite moments in the show.

He’s brought a collection of great musicians along. Chris Stainton plays a variety of keyboards, always remaining subtle and tasteful. Nathan East is a star on both a stand-up bass and acoustic bass guitar. This guy is amazing and a huge standout in the show. He provides a few harmonies. Steve Gadd is on drums and uses mostly brushes and wires. It’s all rather laid back and intimate. They share some comments between some songs, and Clapton is having a ball with these guys. It all appears like it could have gone on forever. Sadly, it doesn’t. You get 17 songs, and it falls a bit under an hour and a half.

The concert is often intercut with some atmospheric shots. There’s footage of the countryside surrounding the estate. Some beautiful skies and many shots of the historic windows and architecture of the estate. It’s nice, but I’m fine with just watching some fine musicians doing their thing.

There are a few musicians trying to cash in on the “lockdown sessions” thing, but that’s not what I see here. This has got to be one of the most sincere efforts of them all. The nearly 80-year-old musician likely doesn’t need any more cash. But I think he’s still having a great time with the music, and that’s worth a lot more than cash.

Nobody Knows You When You’re Down And Out

Man Of The World

Key To The Highway

Got My Mojo Working

You get choices in the audio department. There’s an LPCM stereo track, a DTS-HD MA 5.1 track and a Dolby Atmos track that expands to a 7.1 presentation if you don’t have a full Atmos system. I went with the Atmos, and it all sounds crisp and clean. I think the stage was miked in some odd way. I believe at least Clapton’s vocal mike was a prop. He’s three feet away and weaving to and fro, and the sound never alters. No complaint. I’m glad the sound is flawless.

Clapton has come out quite hard against COVID over-reach. He’s produced protest songs on the subject and has been outspoken about “enough is enough”. This is just another way of him rising above the noise and making something positive happen. And you just can’t help it. When Clapton plays, “You got me on my knees …”

Gino Sassani is a member of the Southeastern Film Critic's Association (SEFCA). He is a film and television critic based in Tampa, Florida. He's also the Senior Editor here at Upcomingdiscs. Gino started reviewing films in the early 1990's as a segment of his local television show Focus. He's an award-winning recording artist for Omega Records. Gino is currently working on his 8th album Merchants & Mercenaries. Gino took over Upcomingdiscs Dec 1, 2008. He works out of a home theater he calls The Reel World. Favorite films: The Godfather, The Godfather Part II, The Body Snatcher (Val Lewton film with Karloff and Lugosi, not the pod people film), Unforgiven, Gladiator, The Lion King, Jaws, Son Of Frankenstein, The Good, The Bad And The Ugly, and Monsters, Inc.
Rick and Morty: The Complete Fifth Season Nightmare Alley (2021)