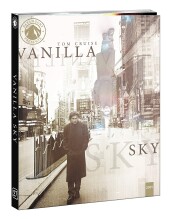 I think I see your problem. You have this list. It’s a list of people you need/want to buy a Christmas gift for. The trouble is that they’re into home theatre, and you don’t know Star Trek from Star Wars. You couldn’t tell a Wolf Man from a Wolverine. And you always thought that Paranormal Activity was something too kinky to talk about. Fortunately, Upcomingdiscs has come to the rescue every Christmas with our Gift Guide Spotlights. Keep checking back to see more recommendations for your holiday shopping. These gift guides ARE NOT paid advertisements. We take no money to publish them. With conditions as they are, shopping won’t be easy this season. The nice thing about discs is that they’re so easy to get from places like Amazon that you can give a great gift and stay perfectly safe while you do it. Paramount Presents:

Harold (Bud Cort) is the son of a wealthy widow, Mrs. Chasen (Vivian Pickles) who is consumed with her social calendar. She is near her wits’ end with young Harold, whose hobbies include staging elaborate “suicides”, attending random funerals, and driving around in his very own hearse. Mrs. Chasen’s attempts to normalize Harold include psychiatrist’s visits, replacing his hearse with a brand new Jaguar, and having his uncle induct him into the army.

At a funeral, Harold meets 79-year-old Maude (Ruth Gordon) when she offers him a piece of licorice. Although Harold doesn’t know what to make of Maude, he’s intrigued when she drives off in the most conveniently available car, which happens to belong to the clergyman. At a subsequent funeral, the vehicle Maude “borrows” is Harold’s hearse. When Maude discovers this, she allows Harold to drive her home. As Maude predicted at their first meeting, the two become great friends. In Maude’s company, Harold finally smiles.

Mrs. Chasen announces that it’s time for Harold to get married and enrolls him with a matchmaking service. As she “helps” Harold answer the membership questionnaire, she responds to each question with her own “correct” answer since she neither knows nor cares who he really is. Harold quickly disposes of each of the arranged dates by appearing to kill himself, and with Maude’s help convinces Uncle Victor that he is not cut out for the army.

In the meantime, Harold and Maude spend a lot of time together. While Maude shares Harold’s enthusiasm for funerals, she also teaches him about music, flowers, and making the most of life. He is in love. On Maude’s 80th birthday, he plans a party for her at which he plans to propose. But, free spirit that she is, Maude also has a surprise for Harold.

Harold and Maude is celebrating its 50th anniversary, but its appeal is timeless. Cort and Gordon are perfect in their respective roles, and I wouldn’t want to imagine Harold and Maude being played by anyone else. The film features music by Cat Stevens.

Extras on the disc:

Yusuf/Cat Stevens: Yusuf (formerly known as Cat Stevens) talks about his songs and the process of integrating them into Harold and Maude.

In 1981 Warren Beatty would have his 2nd film released that he directed and it is an ambitious 3 hour plus epic that is a throwback in many ways to how Hollywood films used to be.  Beatty has always been relatively an outspoken actor when it comes to his politics and with Reds, at face value this is certainly a bold and controversial topic that revolves around the journalist turned activist for the 1920’s communist party John Reed.  While the film does take a deep dive into the politics of the time at its heart the film is more so a love story between John Reed (Beatty) and Louise Bryant (Diane Keaton).

The story takes the viewers from Portland, Oregon to Greenwich Village and eventually halfway across the world to Russia.  In the beginning we see Reed and Bryant are simply artists/writers that are passionate about their ideals but we watch as they become consumed with their ideologies and their need to make a difference and for Reed it simply becomes an obsession that spirals out of control.  The chemistry between Beatty and Keaton drive this film, even when the politics feel a bit too much, it’s their love story that kept me engaged.  The film is loaded with big name stars, Jack Nicholson delivers a fantastic performance as the poet and playwright Eugene O’Neill whom manages to find himself caught in the middle of a love affair with Louise.  Then there is Gene Hackman, Paul Sorvino, M. Emmet Walsh, Maureen Stapleton, and Edward Herrmann also filling out the cast.

One of the more clever things about the film is how it blends in testimonials from those that were around and actually knew Reed and Bryant back in the 1920’s when the story takes place.  This helped me connect more with the film and have a better understanding of how life was for these individuals back then.  This is definitely a sprawling epic that was done in a time before CGI and was shot in numerous countries I can only imagine what the budget would be to film this today.  I’m glad Paramount gave this film the attention it deserved not just with a re-master but to pull this from the vault and make it available for a new generation.  It’s easily Beatty’s best work behind the camera and it’s a testament to why he’s the movie star that he is to this day.

In this reunion between director Cameron Crowe and actor Tom Cruise, we get a surreal story that includes romance, comedy, suspicion, and dreams. Cruise stars as David Aames, a young New York City publishing magnate whose life isn’t what he thinks it is. The film really is mind-bending. I’d hear about the film for years, but never really got around to seeing it, but now I can say for myself that the film really will throw you for a loop. Every time I thought I was getting a handle on the film; it threw me for another loop. By the time, we reached the film’s big reveal, where the veiled is pulled back and the truth is shown, I was thoroughly confused. I generally don’t enjoy that feeling, but in the case of Vanilla Sky, the manner of the storytelling made it so that I didn’t feel overwhelmed by the sudden changes. It made for easier digestion.

I also enjoyed how they were able to fit so many different themes into one story, such as the inclusion of a love story, albeit a tragic one, into a tale of surrealism. Not to mention, that visually, this was one of the most well put together films I’ve ever seen. Particularly the rooftop scene. It is a high-concepted film that was worth watching at least once. I doubt I would watch it an again for a long while after my peek behind the curtain. I would need some time to elapsed so that some of the deeper themes of the film could fade from memory. Then, I would be able to enjoy it all over again.

This film was not really my cup of tea. I suppose I couldn’t get past the sheer impractical nature of the plot. A quarterback killed prematurely, right before he gets the opportunity to play in the Superbowl and gets reincarnated not once, but twice and still manages to accomplish his goal. I understand that cinema is our gateway into worlds where anything is possible, but in the case of Heaven Can Wait this idea is just too much more me to swallow. However, if you disregard this improbability, the film is mildly entertaining. Particularly, all the stuff with the billionaire’s girlfriend and her lover as they find their sinister plans thwarted.

Despite the craziness of the plot, I do appreciate the fact that the film had long arching implications for future cinema, as there is no question that this film was the basis for the Chris Rock-led and written film Down to Earth. Then again, perhaps the credit really goes to the Harry Segall stage play that this film and Rock’s film are both drawn from.

Gino Sassani is a member of the Southeastern Film Critic's Association (SEFCA). He is a film and television critic based in Tampa, Florida. He's also the Senior Editor here at Upcomingdiscs. Gino started reviewing films in the early 1990's as a segment of his local television show Focus. He's an award-winning recording artist for Omega Records. Gino is currently working on his 8th album Merchants & Mercenaries. Gino took over Upcomingdiscs Dec 1, 2008. He works out of a home theater he calls The Reel World. Favorite films: The Godfather, The Godfather Part II, The Body Snatcher (Val Lewton film with Karloff and Lugosi, not the pod people film), Unforgiven, Gladiator, The Lion King, Jaws, Son Of Frankenstein, The Good, The Bad And The Ugly, and Monsters, Inc.
The Matrix: Resurrections The Mitchells vs the Machines (Blu-ray)