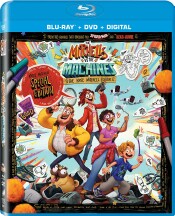 This film was a new experience for me. As you all know, movies like this afford me the opportunity to share my passion for film with my daughter. However, as I put the movie on, she turns to me and says, “Daddy, you know what’s funny? I’ve already seen this.” I found that to be a confusing statement, as I was operating under the impression that this was a newly released title. However, as it turns out, though it is a new release for home media, the film was actually released on Netflix back in April 2021. At this point, I expected that she would attempt to excuse herself and occupy herself with one of her many new Christmas acquisitions. But no, she didn’t do that. Instead, she sat back and prepared herself to watch it again. That’s when I knew it had to be good, because my daughter doesn’t usually do repeats. Lo and behold, it was far better than good. I dare say that The Mitchells vs. The Machines was the best animated film that I saw all year.

The film follows a family of outcasts (that would be the Mitchells), which is comprised of father, Rick (Danny McBride), who is a bit of a survivalist albeit an accident prone one. Then there is the mother, Linda (Maya Randolph), a first-grade teacher who radiates positivity and acts as the family’s moral compass. Younger brother, Aaron (Mike Rianda) is socially awkward and obsessed with dinosaurs. Which leads us to Katie (Abbi Jacobson), the film’s focal point and the self-proclaimed outcast in this family of outcasts. All her life, she felt as though she didn’t fit in anywhere. Choosing to express herself through art, namely filmmaking, she feels misunderstood, particularly by her father, who never seems to have time for her.

Hope is on the horizon, however, when she is accepted to the Los Angeles Film School. For a girl from Kentwood, Michigan, this a dream come true, especially when she discovers people who get her. Everything she wants is finally within her grasp. Unfortunately, this is also around the time that a global robot uprising commences, thanks to tech billionaire Dr. Mark Bowman (Eric Andre). Bowman’s callous treatment of his created A.I. program and shameless intent to replace it with a newly designed updated model leads to the hijacking and of his technology and a robotic revolution. See? Terminator was right.

So, admittedly, all of that seems convoluted, but in some crazy way it works. It made for a widely entertaining story that managed to encompass slapstick comedy and heartfelt ideals, such as the desire to be accepted by those closest to us. The relationship between Rick and Katie was the perfect vehicle for this, as it highlights technology as one of the main cases of the rift between the two family members. Rick is a technophobic, while Katie embraces it as the one true way that she can express herself. This was an easy to accept idea. Relatable too. Made me think of my own relationship with my daughter; her generation embraces technology quite easily, herself included, and while I am not a technophobe, there are some things I confess to not fully understand, i.e. social media. Through that lens, I can relate to the dynamic between Rick and Katie. The manner in which this subplot is handled is one of the film’s many triumphs. It gives the film heart.

Essentially, the story is about them with everything else centered around their relationship. In turn these elements feed one another. A good example is after most of civilization is captured and the Mitchells need to stealthily travel in order to save humanity; Katie has an idea to camouflage the car using art, but Rick is initially dismissive of the proposal due to his inability to comprehend his daughter’s imagination and ingenuity. However, it is essentially brought around when it proves successful. This is a key example of the need for an open mind when dealing with others, especially loved ones. Just because you don’t understand something doesn’t make it wrong. As a parent, I like movies that incorporate life lessons that help instill the values that I am trying to teach my daughter.

Speaking of my daughter, as I mentioned earlier, Nalyce does not do repeats, but for this film, she made an exception, and I can see why. It is full of the high-energy, zany antics that she incorporates into her own everyday life. Periodically throughout the film, we would get a peek into Katie’s imagination and how she processes situations, such as smash cuts to her indie films or vivid imaginative illustrations of plans that she proposes to her family. I kid you not; during these moments my daughter was literally vibrating in her seat. According to her, that is just how her mind works. Interestingly enough, I could see that. She identified with Katie; saw her as a kindred spirit. And because of that connection, she was fully engaged and enjoyed the film like it was the first time.

Given that it actually was my first time, I was glad that this experience was something we could share. Not to put too much emphasis on a film, but I feel like it helped give me a greater understanding my own dynamic with my daughter. I’m not saying that I will be fully embracing TikTok, but I’m open to possibility of us maybe doing one or two of those viral dances together.

The Mitchells vs. The Machines was much more of an experience than I initially expected to get out of the film, made all the better by the opportunity to share it with my family. It is a fun and comprehensive film. It’s a shame that COVID cheated it out of a wider release, because it was fully deserving of one. That said, I thoroughly encourage you to watch it, especially if you have a family. It an experience worth sharing.

Jeremy Butler is a film school graduate of the International Academy of Design and Technology. He is been writing for Upcomingdiscs since 2012; however, movies have played a big part of his life for much longer. Favorite genres include horror, science fiction/fantasy, and comedy. Favorite movies are V for Vendetta, Boondocks Saints, Kiss Kiss Bang Bang, and The Godfather.
Holiday Gift Guide Spotlight: Paramount Presents Resident Evil: Infinite Darkness – Season 01