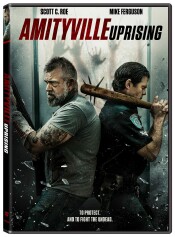 When it comes to Amityville Uprising, it felt like I spent the film’s entire runtime waiting for it to start. I mean, the film literally spent ninety percent of the time building towards the action, which basically took place at the very end of the film. There are sporadic events that occur earlier, but even those don’t start until halfway in. I expect for zombie movies to get the action rolling much sooner than that, but in the case of this film, the plot moves at the pace of a walker in the Walking Dead. That paired with the low production quality, nonexistent character development, and subpar acting makes for a less than enjoyable experience. Granted, I was not expecting box office quality from this production, but I at least hoped that there would be one or two tidbits for me to be able to point to and say that the experience had some good parts. Sadly, that wasn’t the case with this film.

A majority plays out in a police precinct in a small little town in New York. Basically, a nearby chemical explosion at a military facility as caused environmental chaos for the town of Amityville. Specifically, acid rain that kills anyone that comes into contact with it. However, that isn’t where it ends for them, as they are resurrected as horribly disfigured and crazed zombies. In concept, the premise sounds moderately interesting. Granted, zombies are far from a new idea, and it is very difficult to innovate, but in this case, I was at least somewhat interested prior to the film’s viewing. Here is where things fall apart. The film literally spent a majority of its time setting up the acid rain. For the first portion of the film, it was like the idea of the acid rain was an afterthought. Every now and then we’d get a brief scene showing the weather turning, but more time was spent following around the officers of the Amityville station. I’m all for making sure that characters are properly introduced and established so that the audience can become invested in the characters, but it was taken too far here. For nearly twenty minutes, we followed Sgt. Dash around as he delivered everyone’s lunch.

At first, this seemed like a clever vehicle to showcase all the members of the cast, but they carried it on too long and it made it abundantly clear that there were more members of cast than needed. There were at least four or five members of the cast who could have been removed without it impacting the overall story at all. For example, the lieutenant character really serves no purpose. It obvious that Sgt. Dash is the protagonist, so in my opinion it would only have made sense to have him as the most senior officer in the station at the time of the crisis. In fact, that might have helped up the pressure by forcing him into a reluctant leadership role.

The more I think about it, I think something like that would have been great for the character development of Sgt. Dash. From perspective, Sgt. Dash came across as a bit of a everyman, the kind of guy who just goes with the flow and does his best not to make waves. A people pleaser. Forcing him into that type of high intensity role, where every decision is life or death, absolutely would have upped the ante. The film tries for some development of the character via his estranged son, but that missile misses the mark, especially when things start hitting the fan.

In reference to the other characters, there wasn’t anyone else worth remembering. Essentially, they were all one-dimensional. Some had some unrealistic quirks, such as unsanitary coroner who eats his lunch off a corpse and never wears gloves. Then there was the agitated person and disrespectful woman who came to the station to play a ticket. Granted her character was intended to be antagonistic, but her over-the-top fashion just made her obnoxious to the point that I wanted to fast forward through her parts. She did have one line that I found funny and fitting with current climate of the world: “Hey! Six feet apart!”

Jeremy Butler is a film school graduate of the International Academy of Design and Technology. He is been writing for Upcomingdiscs since 2012; however, movies have played a big part of his life for much longer. Favorite genres include horror, science fiction/fantasy, and comedy. Favorite movies are V for Vendetta, Boondocks Saints, Kiss Kiss Bang Bang, and The Godfather.
The Dry (Blu-ray) Exclusive Interview With Osric Chau Of Superhost