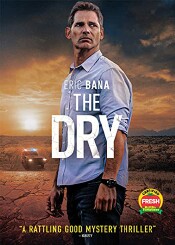 Twenty years ago, he left his hometown of Kiewarra, a farming town in Australia, under a black cloud. His girlfriend was found dead under suspicious circumstances, and all the evidence pointed to him. If it wasn’t for a friend willing to lie for him, he would have ended up in jail. When that same friend’s family is killed in a murder-suicide with all the evidence suggesting that said friend was responsible, he will return to investigate. However, time has not improved the community’s feelings about him, as the people have long memories. Eric Bana stars as  federal police detective Aaron Falk in The Dry, a film based on Jane Harper’s 2017 book of the same name. Having been a fan of Eric Bana for some years, I looked for this this opportunity to watch him play detective. While the story does drag at times, I will say that overall, the quality of the storytelling made the experience worthwhile. Rounding out the cast is Genevieve O’Reilly, a fixture in a Star Wars universe, having been involved in multiple Lucas projects to include Revenge of the Sith and Rogue One as well as her voice role as the character in Star Wars Rebel. While this is a bit off topic, it is worth mentioning that O’Reilly will also return to the Lucas’ universe to reprise her role as Mothma in the upcoming series Andor, set to premiere in 2022.

The story unfolds on two fronts, both featuring Bana’s character prominently. In the storyline set in the present, Falk returns to his hometown for the first time in twenty years following the death of his former best friend Luke, who is implicated in a gruesome murder of his wife and oldest child, sparing his newborn before allegedly taking his own life. Years earlier, Luke provided Falk with an alibi that while was widely disbelieved could not be discredited, following the death of their childhood friend. This decades-old favor is what Luke’s parents use to convince Falk to independently investigate in hopes of clearing Luke of the crime. Speaking of this alibi, the second storyline tells the events leading up to the death of Ellie, Falk’s girlfriend, who was found in the river, a suspected homicide victim. Following the death, Falk and his father received endless harassment from the townspeople, specifically Ellie’s father, who holds Falk responsible.

A social pariah, Falk’s investigation would be impossible if not for the assistance of the town’s local sergeant Greg Raco, a recent implant to the town and the first responder on the scene of the crime. Further complicating the situation is the severe drought that has put the already struggling farming community under extreme pressure. As the investigation continues, new details are brought to light that not only impact the current case, but the decades-old case as well.

As far as mysteries go, I’d categorize this tale as a slow burn. Towards the middle, there were some areas that dragged on a bit longer than necessary. For example, the situation with Luke’s friend, who in a nutshell was providing a bit of a false alibi that was reminiscent of Falk’s own experiences with Luke, while intriguing, was a clear red herring. I’m not suggesting its exclusion, but trimming it down a bit would have helped the film’s tempo. There were a couple other scenes that seemed tedious, or at least that is how it felt until additional context was provided in the latter half of the film.

Speaking of the latter half of the film, that is where things in the film are the most thrilling, as secrets are revealed which made the film more intricate and detailed. There is a bit of a romance angle explored, but it doesn’t really play well into the overall context of the film. It felt a bit forced, particularly because prior to this circumstance there is nothing to hint at the idea that the pair was ever carrying a torch for one another. I suppose shared grief could have been used to explain it, but it was never expressly explored. Perhaps there was more to it in the source material, but not having read it, I can’t say. However, upon viewing the film, I have not ruled out the idea of reading the original novel to see how the two compared.

The killer reveal was decent, but it was overshadowed by the reveal of the killer of Ellie. That said, less time was dedicated to explaining what happened to Ellie than what occurred in present day, and in all honesty, I think that should have been flipped, because the Ellie reveal had larger impact on me as an audience member than the other. Additionally, it was a bit of a bittersweet conclusion, without a satisfactory resolution in my opinion. While there is some catharsis in finally knowing what happened, I would have enjoyed knowing what followed.

Jeremy Butler is a film school graduate of the International Academy of Design and Technology. He is been writing for Upcomingdiscs since 2012; however, movies have played a big part of his life for much longer. Favorite genres include horror, science fiction/fantasy, and comedy. Favorite movies are V for Vendetta, Boondocks Saints, Kiss Kiss Bang Bang, and The Godfather.
Dune (2021) (UHD Blu-ray) (4K) The Amityville Uprising