Posted in: No Huddle by Brent Lorentson on February 5th, 2022 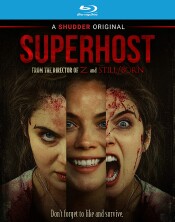 Superhost is a not-so-flattering social commentary on the youth of today who seem to be driven more by the amount of likes and subscribers they have than the actual human interactions they encounter in the course of a day. Whether it’s Tik Tok, Facebook, Instagram, YouTube, or any number of platforms you can think of, it seems people have just become obsessed with seeking the approval of “followers” instead of taking stock in the friends they have in their “real” social structure. The pandemic, of course, doesn’t help any of this, as it seems every week there is some new dance or challenge people are doing in the name of clicks. Also recently it seems suicides and murder-suicides have been occurring more with these “social media influencers”. Maybe it is just the old man in me coming out, but I look at the social media culture and wonder if man has reached his peak and we are all simply on a steady decline from this point forward.

The rant aside, Superhost is a film that was inevitable, and I’m willing to bet that we’ll be seeing more of these films that seem to want to be a cautionary tale of sorts to those looking for social media popularity, that it comes at a cost to yourself and to others, and in the end you really have nothing to show for it (with the rare exception of those who do monetize their viewership). When we meet Claire (Sara Canning) and Teddy (Osric Chau), they are a somewhat happy couple who have their own travellog, “Superhost”, where they travel around and find new spots for weekend getaways and review them.  Lately it seems their fandom has started to fizzle, and they need something that will get their subscribers excited and bring more views to their channel. Immediately it’s kind of hard to sympathize with this couple; after all, they are simply living the dream, right?  Stay at posh locations and comment about them; literally that is the extent of the work these two seem to put into this. Teddy wants to use the platform as a way to broadcast his proposal to Claire. It seems sweet, of course, but again we see him using the site as a way to simply over-share with the world.

When we meet Rebecca (Gracie Gillam), the “Superhost” of their new location, it’s hard to not pick up immediate Annie Wilkes (Misery) vibes from this character with just how over-the-top friendly she is.  Honestly, I liked the Rebecca character even when she makes her obvious transition to the villain role. The film’s biggest mistake was taking this obvious route. The film sets up something that could have been better with Claire, as she is so concerned about likes; just how far could she go?  I was really hoping they’d make her the villain and simply have her exploit Rebecca because Claire thinks she’s weird. This would have been a much stronger direction, but instead the film has no plans of giving viewers a character study with complicated emotions. No, this is a more paint- by-numbers affair, and there’s nothing wrong with that, but it’s a shame when you realize how easily this could have been so much more.

Another problem this film has is that it’s simply too polished and lacks anything in the way, shape, or form of atmosphere. Just about 90 percent of the film takes place in the daytime, and the location is beautiful and sterile, basically all things that don’t equal to a creepy cabin the woods vibe that you’d hope this kind of film would have. By the time the film decides it wants to be a horror film, I feel most genre fans will have checked out of the film already. What will keep diehard fans of horror watching is the appearance of Barbara Crampton. I’m not afraid to show a little bias in saying she’s one of my favorite scream queens ,mostly due to her performances in Re-Animator and From Beyond. She’s playing the jilted owner of a property Claire and Teddy previously reviewed, and apparently it was a review that was bad for business. I doubt I speak only for myself when I say this is something I wish they explored more and again would have made the main characters more rounded and dynamic, but again it is just another missed opportunity.

What works is the film’s brisk running time of 84 minutes. It’s entertaining, but nothing you would dare to call genre-defining, and that’s OK. We should be grateful that it wasn’t simply a found-footage film. This is one of the weaker films that Shudder has put out, but this is a film that could work as something to show a friend or partner who you are trying to get interested in the horror genre that won’t be too overwhelming for them.

We also have an interview with Osric Chau, one of the stars of the film, if you want to learn more about the film and the actor.

Brent Lorentson is a horror writer and film critic based out of Tampa, Florida. With a BA in Digital Film, he co-wrote and co-directed Scavenger Hunt. His short stories have appeared in various horror anthologies. In 2019 his short script Fertile Blood will be a part of the anthology horror film Slumber Party. He is currently working on his first novel A Dark and Secret Place set to be released in late 2019. Favorite Films: Taxi Driver, Fight Club, I Saw the Devil, The Wild Bunch, Dawn of the Dead, A Clockwork Orange, Pulp Fiction, Heathers, The Monster Squad, and High Fidelity.
Exclusive Interview With Osric Chau Of Superhost Jackass Forever