Posted in: The Reel World by Jeremy Butler on February 5th, 2022 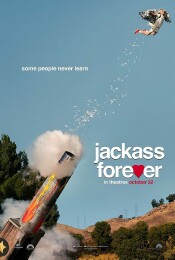 Over twenty years ago, we were introduced to a slapstick television series known as Jackass. While the series only ran for three seasons, it was a show like no other, as it featured its cast intentional doing dangerous things and often risking injury and death for our entertainment. It also went on to spawn multiple spin-off series before transiting to the big screen in what is now four movie adaptations. It also introduced the world to the charisma of Johnny Knoxville, who without question was the most fearless and daring member of the cast; on several episodes, we witnessed as he got seriously injured while performing stunts that included getting gored by bulls, shot with tasers, shot from cannons, and contending with professional heavyweight boxers.

And now twenty years later, after seeing Jackass Forever, I can personally attest, and Chris Pontius said it best, “Even after twenty years, we are still doing the same stupid s#$%.”  It is literally like for the Jackass crew time has stood still. Now that is normally not a good thing, as change is necessary, but when it comes to this success of this popular franchise, consistency is paramount. Similar to how they used to give you disclaimer at the beginning cautioning you against attempt to replicate any of their stunts, I feel obligated to issue a disclaimer of my own: Warning! While the film is wildly entertaining, a strong stomach is needed to fully enjoy its contents. If you are lacking in that department, it may be best to avoid it.

Now that we got that warning out of the way, I should probably tell you about the opening scene that necessitated such a warning. In the fashion of an old Godzilla monster attacking a city, it will take the audience less than five seconds to realize that Godzilla is actually someone’s painted penis. Yes, I said penis. And trust me, seeing it isn’t the most graphic part of the scene. Again, it takes a strong stomach to just make it out of the opening credits. I wish I could tell you that was the only time that you would see a member of the cast naked, but in this installment, the cast really went for broke with the whole nudity thing, as I’m fairly sure that at least half the cast’s privates were on displayed at one point or another. To be fair, it wasn’t just nudity for nudity’s sake, as the group was literally sacrificing life and limb (usually that very specific limb) in a stunt that was guaranteed to make you cringe. I hope this gang has or already decided against kids, because I can’t see how procreating is possible after some of things they were doing, which involved bees, compression, or outright blows from fists, softballs, or hockey pucks.

It’s worth mentioning that while it got a majority of the band back together, there were a few original cast members missing. Of course there is Ryan Dunn, who tragically died in a car accident back in 2011, and the film does pay its respects to him. However, there was another original cast member missing; Dunn’s best friend Bam Margera. Margera’s absence was noted with me, as with the exception of Bad Grandpa, he has been involved with the franchise since its inception. Unfortunately, some personal issues as well as a strained relationship with members of the group made his inclusion an impossibility. This was noteworthy for me, as he was always among my favorite members of the group. Unfortunate as it was that he couldn’t be a part of what I anticipate to be the final installment in the franchise, there were a couple of new additions that held their own amongst the originals. There is Poopies. Yes, I said Poopies. With a name like that, you just knew he was going to fit in famously, and he did. He didn’t shy away from any of the reckless stunts; he was actually enthusiastic to take part, with the exception of the prank conducted by Knoxville involving a dark room and a venomous snake.

And of course it is not Jackass without some famous friends stopping by to be a part of the fun, such as old staples like Tony Hawk, Matt Hoffman, Rob Dyrdek, and Eric Andre. Then there were the new faces, such as UFC Heavyweight Champion Francis Ngannou, Tyler the Creator, and Machine Gun Kelly. The film even pays homage to some of its previous stunts, like putting a new spin on Dave England’s pooping in a display toilet, and Johnny Knoxville’s bull stunt. Something noteworthy about Knoxville’s stunt: it is clear that he gets hurt after performing it, and a later publication indicated that he sustained brain damage as a result of it. That just goes to show Knoxville’s commitment to entertaining the masses, as well as the importance of non-professionals not attempting the stunt.

And naturally it isn’t a Jackass film without a couple of practical jokes on Danger Ehren. Man, it is a good thing that he is a good sport about these things, because the cast was relentless about going after him. They did everything to him, including locking him in a room with a bear as he was drenched in honey and salmon. But like always, he took it in stride.

Again, a strong stomach is needed, but if you are a fan of the franchise, you are unlikely to be disappointed with installment. It has all the things you loved about the others and more. I came in expecting that I aged out of this kind of comedy, only to realize that some things are timeless. Or perhaps I’m not as mature as I originally thought. I’m not sure which.

Jeremy Butler is a film school graduate of the International Academy of Design and Technology. He is been writing for Upcomingdiscs since 2012; however, movies have played a big part of his life for much longer. Favorite genres include horror, science fiction/fantasy, and comedy. Favorite movies are V for Vendetta, Boondocks Saints, Kiss Kiss Bang Bang, and The Godfather.
Superhost Moonfall