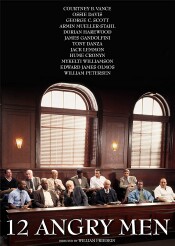 Remakes are nothing new. They’ve been around for as long as there have been films. Today we appear to be dominated by the remake, but they’ve been around forever. There are many reasons to do a remake. Often, like the case of Peter Jackson’s King Kong and the recent Kong/Godzilla movies, it’s because technology has taken us to a place where we can do things on the screen that the original filmmakers couldn’t have dreamed of. Other times it’s merely a classic story that stands the test of time, and every once in a while someone wants to attach themselves to that history. Yet other times there’s more that can be added to the story, or there is a fresh perspective to what came before. While many of these types lead to sequels and reboots, they still lead to the remake. Then there are those remakes that are almost a shot-for-shot imitation of the original with no apparent reason to exist other than to capitalize on the name. I really don’t want to put the 1997 made-for-television remake of 12 Angry Men in that category. We’re talking about a respected director who has directed a classic of his own and a very powerful cast of actors. But when you strip away that star power, you’re left with pretty much an exact duplicate with only surface changes. 12 Angry Men (1997) is a pretty good film; don’t get me wrong. But the original was a great film, and this version adds nothing to the story or the experience.

Here are a couple of answers that likely play into the remake. This cast is more ethnically and racially diverse. The original film sported all white males. Rose was asked why he didn’t go a step beyond and include at least one woman, and his quip was, “Then we’d have to change the name of the film.” I get that as a motive, and had the film originated today, it would likely not have been called 12 Angry Men and would have included a much more diverse cast. If that’s the point you’re trying to make, it would have better served that point by making this some kind of a sequel to the original film using a very different case and new and more modern arguments. With just a few short examples the film is identical, and I’m not sure that was the answer.

You can view the film in the original full frame aspect ratio or 1.78:1. I did some comparisons, and the widescreen does offer more image. It is not just a zoom-in of the original presentation.

The film is worth watching for what it is. Forget the argument about whether it should have been made. It was, and it’s a pretty good film. I hope it might have at that time inspired people to watch the original, and that’s my hope with this release. William Friedkin is a great director, and it’s a bit odd that he remade a classic film when you consider his lukewarm, at best, reactions to the various follow-ups to his The Exorcist. It’s still a powerful story and a cautionary tale that is relevant as much today as it was in 1957 or 1997. Different cast; slightly different delivery. “Facts may be coated by the personalities of the people who present them. Let’s not forget that.”

Gino Sassani is a member of the Southeastern Film Critic's Association (SEFCA). He is a film and television critic based in Tampa, Florida. He's also the Senior Editor here at Upcomingdiscs. Gino started reviewing films in the early 1990's as a segment of his local television show Focus. He's an award-winning recording artist for Omega Records. Gino is currently working on his 8th album Merchants & Mercenaries. Gino took over Upcomingdiscs Dec 1, 2008. He works out of a home theater he calls The Reel World. Favorite films: The Godfather, The Godfather Part II, The Body Snatcher (Val Lewton film with Karloff and Lugosi, not the pod people film), Unforgiven, Gladiator, The Lion King, Jaws, Son Of Frankenstein, The Good, The Bad And The Ugly, and Monsters, Inc.
C.H.O.M.P.S. (Blu-ray) The Antichrist aka The Tempter (Blu-ray)