The Antichrist aka The Tempter (Blu-ray) 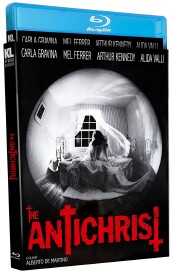 This 1974 film has previously been regarded as an Italian version of the widely successful American supernatural film, The Exorcist. It’s been suggesting that The Antichrist was an attempt to cash in on some of the success that the American film experienced a year earlier. After watching it, I don’t see why the two films can’t coexist. Whether or not the American film had any bearing on this one will never be determined, but it stands to reason that if you enjoyed that one, there is no reason that you won’t enjoy this as well. I suppose there is the risk of it feeling redundant, but a little redundancy has never bothered me. Besides, if you can’t deal with films with similar premises and themes, your lists of viewing pleasure is going to shrink exponentially. I won’t spend a lot of time comparing the two films for couple of reasons: one, I believe that would be doing this film a disservice, given that I found it mildly entertaining; and two, it’s quite some time since I watched to The Exorcist, so my memory of it is slightly foggy. That said, I believe that will give me an objective view of The Antichrist, because I won’t waste undue time with comparisons.

The film follows Ippolita, the adult daughter of a wealthy Italian aristocrat, who has been paralyzed since she was 12 years old following a car accident that also killed her mother. Having severe attachment issues, she falls into a depression after learning that her father has become involved with another woman. Accustomed to monopolizing her father’s time, Ipploita does not take the news of the relationship well. Meanwhile, despite the decade old accident that left her wheelchair bound, there appears to be no medical reason for her paralysis. Suspecting her condition is psychosomatic, the family consults an expert who attempts regression therapy in an effort to cure her. However, the therapy opens her up to something else. Something far more sinister in nature.

So, the film takes quite a bit of time to build any traction, as large chunks of Act 1 are filled with long stretches with of activity that do very little to move the plot along, such as the relationship stuff with the dad. It served a purpose initially, in order to facilitate putting the main character into a vulnerable state, but after that, it served little purpose in my opinion. I imagine these periods were intended to help build suspense, but they kind of do the opposite. It made me a little impatient for something of significance to occur. I was tempted to reach for the fast-forward button. However, once things kick off at a dinner party where the demon first rears its head, the film becomes more interesting.

The film keeps the plot fresh by dividing the cast into believers and skeptics regarding Ippolita’s possession. It was clear to me what was going on from the jump; I mean, she was talking in a male voice, and there was sinister wind indoors. I suppose playing devil’s advocate (not literally; that was Ippolita’s gig), I can see why select people were more willing to embrace a scientific explanation than a demonic one. But by the end of Act 2 there was no denying what was happening. This was my favorite section of the film. Granted some of the movie magic is outdated and doesn’t translate well to the modern era, but the special effects for the set and makeup were still convincing. When the roof started caving in, that was convincing. When Ippolita floated through the air, not so much. But, given how long ago this was made, having any of the effects still hold up is an accomplishment in itself.

The ending was a bit lackluster for my taste. I will give points for avoiding a traditionally happily-ever-after motif, but I would have liked to see a bit more to suggest how things were going to go in the future. As is, it felt a little abrupt. I expected a bit more of a cathartic ending.

So looking at this film objectively, without comparing it to another film that I won’t name again, I say, not bad. Especially for its era. While it can be a kind of long-winded in its pursuit of suspense, if you make it to Act 2, things become interesting. For those who will undoubtedly go into it with a certain level of bias, I urge you all to remember that original ideas are few and far between. Give the film a far shake. You may find that all the things you love about the other film exist in this one as well.

Jeremy Butler is a film school graduate of the International Academy of Design and Technology. He is been writing for Upcomingdiscs since 2012; however, movies have played a big part of his life for much longer. Favorite genres include horror, science fiction/fantasy, and comedy. Favorite movies are V for Vendetta, Boondocks Saints, Kiss Kiss Bang Bang, and The Godfather.
12 Angry Men (1997) (Blu-ray) The Batman (2022)