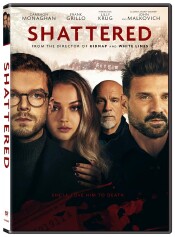 It’s amazing how a pretty face can get you act against your better instincts. Letting someone you just met, a complete stranger, move into your house and giving access to your top-of-the-line security system. Yeah, that is not something that happens unless the person is breathtakingly beautiful. Incidentally, Lily Krug fits that description to a tee. She is a knockout beauty without question. However, looks alone wouldn’t have been enough, given the dark turn her character was destined to take; there had to be some malice behind those eyes. She had to have the eyes of a heartless and calculating sociopath. Did she deliver? Let’s just say, whenever I see her in future roles, even if she is playing a protagonist, it’s going to be hard not to see the predator that I know is lurking behind her eyes.

Shattered follows tech millionaire Chris Decker (Cameron Monaghan), a recent divorcee, who after selling his company has withdrawn from the world. He dedicated his life to his company, so much so that he prioritized it over his family, leading to his subsequent divorce. Now without it, he finds it difficult to let go of the things he pushed aside in favor of his work, i.e. his marriage and his relationship with his daughter. However, according to his soon-to-be ex-wife (Sasha Luss), he needs to move on. Almost as if on cue, enter Sky (Lily Krug), a captivating and disarmingly charming woman he has a chance meeting with in a supermarket. The attraction is instantaneous, and after an accident leaves Chris injured and in need of full-time care, Sky steps in to play nurse.

Almost immediately after this, things take a turn for the frightening, as Sky nonchalantly reveals another side, a greedy and conniving side. Before Chris knows it, he is instantly at the mercy of a sociopath who will go to great lengths to get what she wants.

So, the film isn’t a carbon copy of the classic film Misery, but I can see some similarities. The main character is all but helpless and at the mercy of a dangerous individual without the capacity for empathy. However, in the case of this film, greed is the character’s ultimate motivation. Initially, I wasn’t expecting that turn of events. I was operating under the assumption that Sky would reveal herself to be a damaged individual of course, but I expected her ultimate motivation was going to be the pursuit of unconditional love. That way would have made the film bit of a cliché, yes, so I do prefer this film’s path to that alternative. It doesn’t necessarily break new ground, but it made it so that I was caught off guard.

It was clear very early on, particularly during Sky’s interactions with her roommate prior to her relocating to Chris’s rustic home, that she was a manipulative person who used her looks and sexuality to further her goals. However, what I wasn’t anticipating was how quickly and how nonchalantly she revealed her nature and intentions. I figured this was something that the main character was still to glean in small doses over time; I expected that we would see her try to isolate him away from the few people in his life and try to monopolize his time. Instead, Act 2 moved much quicker, with her revealing her true character immediately. In retrospect, I believe this played a lot better. There was shock value, with the ease that she admits her sins. For me, this is where Krug shows her prowess as an actress. Listening to her reveal the depth of her plan and deceit, adds to the mystique of her character, because prior to her reveal, it hadn’t occurred to me how calculating she could be.

Part of the mystique was diminished when other key elements came to play regarding her plans. I would say more, but I don’t was to spoil too much. Despite there being essentially nothing redeeming about her character, there was a moment when it looked like she had slight reservation about what she was doing, when Chris made an appeal about why did she have to take it from him, when he would have given it all to her. In this moment, I detected some mild wavering in the character’s resolve; this too is a credit to Krug, because it takes tremendous skill to convey that while playing the villain. Monaghan, for his part, worked well with Krug. Given that they were the central characters of this film, that was important. He does a good job establishing his character early on, a lonely man in need of a connection. He created the vulnerability that allowed the Sky character to launch her trap. That in itself is significant, because without it, the entire premise of the film would have fallen flat.

So, in summation, while the film doesn’t necessarily break new ground, the manner in which the story was told was intriguing. That coupled with the addition of a relatively fresh face talent makes Shattered moderately entertaining. There was only really one way for it to end, which is normally the case with a film of this type, but the chosen architect for a particular character’s demise was another thing that I didn’t see coming. So, all in all, the film kept me on my toes, and you can’t really ask for more than that.

Jeremy Butler is a film school graduate of the International Academy of Design and Technology. He is been writing for Upcomingdiscs since 2012; however, movies have played a big part of his life for much longer. Favorite genres include horror, science fiction/fantasy, and comedy. Favorite movies are V for Vendetta, Boondocks Saints, Kiss Kiss Bang Bang, and The Godfather.
The Final Option aka Who Dares Wins (Blu-ray) C.H.O.M.P.S. (Blu-ray)