The Final Option aka Who Dares Wins (Blu-ray)

Posted in: Disc Reviews by Gino Sassani on March 1st, 2022 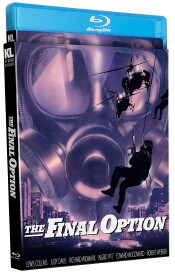 On May 5th 1980 film producer Euan Lloyd was on-hand for 17 minutes while the Iranian Embassy in London was raided by Britain’s elite Special Air Service (SAS) to free hostages taken by a terrorist cell. He immediately ran back to his house and called his agent to register several film titles, including Who Dares Wins, which was the original shooting title and British release title of what in America came to be The Final Option. It’s important to understand that it was never his intent to do a film about the exact event but use that inspiration to do a film that often mirrors that of the actual raid. Instead of using the actual terrorists and their motives, he felt it was important to make the story not about the bad guys so much as it would be a celebration of the bravery and actions of the SAS. He invited the actual SAS to participate. They declined but eventually offered him some under-the-table assistance when they saw what it was he was trying to do. Those motives have created a bit of a controversy over the film throughout the years, and Lloyd has been accused of making a right-wing propaganda film, which if you actually see the film, you’ll quickly realize it is not. Now you have a chance thanks to KL Studio Classics and the Kino release of The Final Option.

The 1980 setting remains. This time the terrorists are domestic and have infiltrated a peace movement that has grown because of a new treaty Britain signs to allow American nukes on the islands. They use the framework of the legitimate movement to recruit and create the civil disorder they need to do something huge. That chance comes when they learn that several American Senate members and US cabinet members will be attending a dinner in their honor hosted by the Iranian embassy. But British Intelligence knows they are there, and they know something is up, so they start to prepare for the worst.

An American and a German officer arrive at SAS to learn their tactics. On their first training mission Captain Peter Skellen (Collins) decides to brutally torture the officers. His actions cause him to have to resign in disgrace. But it’s all a ruse. He’s done this to infiltrate the terrorist cell by seducing their leader, Frankie Leith (Davis). She sees the value of having an ex-SAS officer because she knows she’ll have to contend with them when they take over the embassy. Others are suspicious, and he’s caught talking to his connection, leading to trouble for his contact agent Ryan, played wonderfully by Norman Rodway. He’s just one of those colorful and likable characters that you just know is likely to get himself killed. Peter ends up pretty much on his own with a cover that’s broken and a wife and child in danger. Still he manages to find a way to assist in the rescue raid that saves the hostages and kills the bad guys. Norman Rodway has made a 4-decade career out of playing those colorful characters on British television.

The cast is a solid one from top to bottom. Lewis Collins had just broken out as the lead on The Professionals, which had just become one of British television’s top shows. Director Ian Sharp was one of the directors of that show, and it was their team-ups that caught the eye of Lloyd and gave him his first hires for the film. Ingrid Pritt is very well known to horror films for her work with the likes of Peter Cushing and Christopher Lee in such Hammer classics as The Vampire Lovers, Countess Dracula, and The House That Dripped Blood. She also had a nice stint on Doctor Who with both John Pertwee and later Peter Davison. She’s terribly underused here but does have a crucial role to play. Edward Woodward has a small role, but he’s tough as nails as is fitting for television’s original Equalizer. My wife and I used to watch the show regularly, something rare in the 80’s unless it was a good sit-com or Steve Bochco. No one does it better. Robert Weber plays one of the hostages, a General Potter, and he’s no stranger to four decades of American television, usually playing featured bad guys on shows like The Rockford Files, Cannon, McCloud, or Quincy, but his feature resume isn’t anything to ignore with films like Midway with Charlton Heston and The Dirty Dozen with power actors like Telly Savalas, Charles Bronson, Ernest Borgnine, Lee Marvin, and Donald Sutherland. Finally, Judy Davis, who plays leader Frankie Leith, is currently playing a nurse in the new spin-off series from One Flew Over The Cuckoo’s Nest, the origin story for everyone’s least favorite nurse … Nurse Ratchet. It’s call Ratched.

The Final Option is presented in its original aspect ratio of 1.85:1. The 1080p image is arrived at with an AVC MPEG-4 codec at an average 25-30 mbps. The high-definition image presentation is not going to win a lot of rewards for its restoration. But the print is likely much cleaner than it has been. This is not a film with a lot of release history in America, so I don’t really have access to an earlier print to compare. While black levels aren’t extraordinary, there is plenty of shadow definition to allow you some detail during the raid. There is also a rather bizarre dinner theatre scene where Peter first seduces Frankie and the awkward lighting actually makes it all as surreal as I’m sure it was intended to be. I didn’t find any major artifacts or film degradation. The grain remains intact. Colors are a little muted, as I suspect they were intended to be.

The DTS-HD Master Audio 2.0 is basically there to serve the dialog, and that’s exactly what you get here. Dialog cuts through perfectly. The score is somewhat subdued and almost sounds like an 80’s television film production. The subs remain quiet, which might be my only true complaint here. The training exorcises deliver some nice explosions that don’t really rock the room. A lot of music is source and sounds pretty much CD quality or a little better.

There is a very informative Audio Commentary with Producer Euan Lloyd, Director Ian Sharp, and moderated by Jonathan Sothcott.

The Last Of The Gentleman Producers: (38:59) This biography of Euan Lloyd is led by Roger Moore and Ingrid Pitt and takes us through the producers life and the milestone movies he made. Both talk about what it was like to work for him. There’s a distracting flaw here. The film clips are not anamorphic and are stretched almost to the point that they are unwatchable.

While I don’t see the film as the right-wing propaganda piece that some have tried to paint it, it is certainly one that has respect for these British special forces of the SAS, and I’m alarmed that that has to be considered political. They certainly never asked anyone’s ideology before rescuing them, and it’s not political to distinguish that there are indeed good guys and bad guys in the world. Some say it’s not that simple, and that’s fair. But because there are real-life heroes who put their lives on the line, the rest of us get to watch movies and have opinions about what we see. Because of these kinds of folks the rest of us “have all the time in the world”.

Gino Sassani is a member of the Southeastern Film Critic's Association (SEFCA). He is a film and television critic based in Tampa, Florida. He's also the Senior Editor here at Upcomingdiscs. Gino started reviewing films in the early 1990's as a segment of his local television show Focus. He's an award-winning recording artist for Omega Records. Gino is currently working on his 8th album Merchants & Mercenaries. Gino took over Upcomingdiscs Dec 1, 2008. He works out of a home theater he calls The Reel World. Favorite films: The Godfather, The Godfather Part II, The Body Snatcher (Val Lewton film with Karloff and Lugosi, not the pod people film), Unforgiven, Gladiator, The Lion King, Jaws, Son Of Frankenstein, The Good, The Bad And The Ugly, and Monsters, Inc.
Man on the Moon (Blu-ray) Shattered