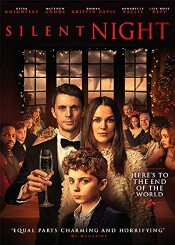 Who would have thought that a movie that features the apocalypse and mass suicide would have moments of charm and levity? I mean, when you think of those type of themes, you don’t expect that you are going to have some laughs. And yet somehow Silent Night pulls it off. Part of that probably had to do with high-class talent that took part of the film, which featured Matthew Goode, Keira Knightly, Annabelle Wallis, Lily Rose Depp, and Lucy Punch. The film lulls you into a bit of a false sense of security; I initially thought that Goode’s and Knightly’s characters were going to turn homicidal and murder all their dear friends. I figured that was the central premise of the film. All in all I think I prefer the film as it is instead of that idea. While that might have been interesting to see, it would have made the film more of a one-trick pony. As it is, Silent Night is witty, funny, and still manages to tackle complex philosophical views in an easily comprehensible manner. That is a feat not easily accomplished.

As it is, Silent Night follows Nell (Knightly) and Simon (Goode) as they prepare to host their annual holiday dinner at their country estate with a group of their dear friends. Nothing appears out of the norm. In fact, everything seems perfect. Except for one thing: everyone is going to die. Yes, you read that correctly; I said everyone is going to die.

What is gradually revealed is that there is an imminent environmental catastrophe occurring, and this is going to be everyone’s last night alive. That is a very bitter pill to swallow. Speaking of pills and swallowing, that is another important debate of the film, and quite possibly one of my favorite aspects of the story. So, with the prospect of an agonizing death approaching, the government has offered a painless alternative in the form of a suicide pill. This sparks a continual debate throughout the film: how do you want to die? There is a great debate about this, particularly between Nell and Simon and their young son, Art (Roman Griffin Davis). You may recognize Davis from JoJo Rabbit. I must say, for it being only his second theatrical film, he establishes himself like a 20-year veteran. His scene in the car with Goode and Knightly where he argues against what his theatrical parents are choosing for him is a key highlight of the film. He held his own with actors with decades more experience. It’s easy to see what all the fuss was about when it came to his debut.

The evening isn’t without its tension, as old, thought-buried issues are brought up. Given the circumstances, you can’t blame anyone for wanting to die with a clean slate. Fortunately, even this portion is not without some levity, when it turns out one of the revealed secrets involving an “act of sacrificial love” that brought two people together is brought up. At its mention, I found myself laughing with portions of the cast, as the horror of the act dawns on the involved parties.

He isn’t the only one to raise philosophical issues with the situation. Wallis and Punch have a pretty entertaining discussion about it in a hallway, in which they compare the situation to The Road. Then there is Lily Rose Depp’s character, who receives news that night which cause her to question the ethics of the decision. With all nuisances of the situation going on, the film still manages to work in some anecdotes to keep things from becoming too serious despite the seriousness of the situation. My favorite is permitting the children to curse, because why not, right?

Interesting tidbit: this film served as the feature film debut for writer-director Camille Griffin. Even more interesting, Nell and Simon’s three children, including Roman Griffin Davis, whom I’ve been speaking so highly of, are the actual children of the director. Don’t worry, though, as I said, nepotism likely wasn’t a factor for Davis. He deserved his casting. Another fun trivia fact, Knightly and Rose Depp share a mutual friend, or should I say acquaintance, in the form of one of Knightly’s old casemates for an internationally popular franchise, who also happens to be Rose Depp’s father. I’m pretty sure I don’t have to name him, right?

I’m conclusion, Silent Night had much more to offer than I initially thought. It was unexpectedly funny without undermining the serious context of the plot, and very thought-provoking. I don’t believe I could have asked for more from the movie than I got.

Jeremy Butler is a film school graduate of the International Academy of Design and Technology. He is been writing for Upcomingdiscs since 2012; however, movies have played a big part of his life for much longer. Favorite genres include horror, science fiction/fantasy, and comedy. Favorite movies are V for Vendetta, Boondocks Saints, Kiss Kiss Bang Bang, and The Godfather.
Yellowstone: Season Four (Blu-ray) The Matrix Resurrections (UHD Blu-ray) (4K)