Posted in: Disc Reviews by Jeremy Butler on March 11th, 2022 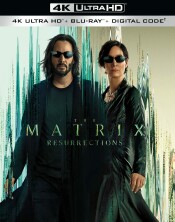 “Maybe this isn’t the story we think it is.”

I wanted to believe that it was possible. I really did. I wanted to believe that it was possible to make a quality addition to the iconic franchise despite nearly twenty years having gone by since the third film. But alas, here we are, and it clearly wasn’t possible to make a quality addition to the franchise. I should have trusted my instincts. While The Matrix: Resurrections may provide us with answer regarding the ultimate fate of Neo and Trinity, those answers come at the cost of entertainment. I am a firm believer in letting sleeping dogs lie, and I can honestly say that this franchise would have been better off without this latest installment, which in my opinion adds nothing to it. I’m honestly shocked at how disappointed I was with the film given that two-thirds of the main cast came back for the film. Trust me, we are also going to discuss the one-third that didn’t and the dishonorable way that they chose to continue the character.

While it’s been around twenty years for us since we’ve seen Neo or Trinity, in the Matrix universe, it’s actually been around 60 years. When we last saw the couple, Trinity had been fatally wounded invading the machine city, and Neo had sacrificed himself in order to destroy Smith and all his clones. Neo is last seen being carried away by the machines. So what happened? Apparently, Neo was reintegrated into the Matrix; his memories stripped and transformed into a video game in order to add a grain of truth to the lie that the machines are selling. Despite this, something about his reality still doesn’t sit completely well for him.

Meanwhile, Neo’s earlier sacrifice has led to an age of prosperity for the humans. However, the war rages on, and new threats are emerging. Humanity’s bright future is not guaranteed, and to ensure their continued survival, they will need hope. They will need The One. Which leads us back to Neo, who begins to remember who he is. However, that is just part of the obstacle, because in order to be what humanity needs, he needs something, too. He needs Trinity.

So where the original film was derived from the tale of Alice and Wonderland, this installment is clearly derived from the tale of Sleeping Beauty. This is perfectly emphasized by the state that we find Neo in at the beginning of the film. This concept was initially interesting and provided a somewhat explanation for what happen to the character post-Revolutions. Even still, outside of that initially intrigue it does not explain the machines motivation for keeping him that way. I get that Neo as The One is a threat, without question. But why not just kill him? I don’t feel that the machines motivations were ever adequately explained. They went to a lot of trouble to put the character on ice, but I feel like some time should have been dedicated to explaining that.

Which leads me to my questions behind making this movie to begin with. Why? Fine; I accept the obvious financial motivations, but as I mentioned earlier, this film, for me, added nothing to the franchise. It was the equivalent of a high school reunion or a where-are-they-now type scenario. In all honesty, all this film did was diminish the overall quality of the franchise. Granted I will admit I wasn’t exactly happy with the ultimate fate of the characters, but to my mind, this was not any better. A bit cheerier, but not better. It is also clear that this film was intended to serve as a potential vehicle for a revamping of the franchise. I am very against that idea, but if it is to happen, I strongly recommend, though I’m not sure how to accomplish it, the restoration of Fishburne as Morpheus. This is no shade to Yahya Abdul-Mateen II, as I am a fan, but there is only one Morpheus. And it is Laurence Fishburne. I can’t express my degree of disappointment at the revelation that Fishburne was not going to be returning. I mean, you went to the trouble of bringing Keanu Reeves and Carrie-Anne Moss back, but shun Fishburne. They started this journey together; they should have finished it together.

To the film’s credit, they did bring back another person that was part of the original trilogy. It was nice to have some familiarity, but doesn’t move the needle all that much. Then there was the new school that was brought in, which included Iron Fist’s Jessica Henwick. While I am happy to see her land on her feet after the cancellation of the Marvel series, I don’t feel that her character was essential to the storyline. In truth, I don’t really feel that we learn anything of substance about her. It’s established that she has connection with Neo, but that connection does not really bear fruit in my opinion. I would have liked to have learned more about her. It is hinted at that she is a bit of a renegade and willing to go against her superiors in order to do what she believes is right. However, again, that fruit kind of dies on the vine. Then there is Neil Patrick Harris. Again, I am a fan, but his signature style of pizzazz does not jive with the overall tone of the film.

The Matrix Resurrections is presented in its original aspect ratio of 2.39:1. The ultra-high-definition image presentation is arrived at with an HEVC codec at an average of 70 mbps. Unlike the original films, this movie was shot on digital and not film, and it makes for a very different look from the other entries. This is a very glossy and shiny product with no grain, artifact, or digital noise of any kind. The color grading is also more consistent. There isn’t as much change between the real world and inside The Matrix. You don’t get as much of the green color correction, and it makes it a cleaner and sharper looking film. With all of the flaws of the narrative, the image is as good as it gets. There’s a lot of shadow work here, and the HDR gives you wonderful contrast and shadow definition. Lines are very tight here. The level of detail is often off the charts. I was truly blown away by water elements. Reflections from water sources are nothing short of stunning. Splashes offer great definition. The CGI is seamless with live action, and I suspect it was shot in native 4K.

The Atmos track defaults to an OK 7.1 mix. As much as the image presentation blows me away, I was somewhat disappointed in the audio presentation. It’s clean and clear, to be sure, with some nice surround elements, but it is nowhere near as immersive as the original film. The subs really don’t come to the rescue during the action scenes. I had to check to make sure my powered sub was actually powered up. My sub was powered up, but this audio presentation is not. Dialog cuts through just fine, and of course there’s too much talking and not enough doing to be found here. Music is nice, but it just doesn’t have that special push to go along with the image.

The features are all on the Blu-ray copy of the movie and Warner’s latest menu format is clumsy. Some titles are folded into two menus, making it hard not to replay the same features. Here’s a reasonable breakdown of what we have here. Content-wise, there’s good stuff here.

No One Can Be Told What The Matrix Is: (8:52) Reeves and Moss try to give you a recap of the previous films. There’s some footage from all four films, and they have a little fun with the concept.

Resurrecting The Matrix: (30:44) Cast and crew offer the typical insights with plenty of clips and on-set footage. They focus on the differences between this film and the Trilogy.

Neo x Trinity – Return To The Matrix: (8:16) This one mostly features Reeves and Moss together talking about getting back into the film and some of their shared experiences.

Allies + Adversaries – The Matrix Re-Mixed: (8:27) The supporting actors introduce you to their parts and talk about how exciting it was to join this universe. You get insights into the characters and relationships and plenty of behind-the-scenes footage.

Matrix 4 Life: (6:19) A lot of the behind-the-scenes footage here is from a 2004 film called The Burly Man Chronicles. Cast and crew who have been here from the beginning share their experiences.

I Still Know Kung Fu: (4:56) Cast and crew talk about the action and stunts.

The Matrix Reactions: Here it gets complicated. This feature has nine segments, a few already run, with a play-all option. Warner has done this frequently of late, and I have to say I wish they’d just quit it.

So with this installment, we only had one of the original creators making this film, and needless to say, I think this movie very clearly needed them both. The film lacked the substance and ingenuity of the original film. It just felt really disconnected with the source material. Even the fight sequences weren’t up to par with the others. When it comes to this film, they threw everything at the wall to see what stuck, and nothing did.

Parts of this review written by Gino Sassani

Jeremy Butler is a film school graduate of the International Academy of Design and Technology. He is been writing for Upcomingdiscs since 2012; however, movies have played a big part of his life for much longer. Favorite genres include horror, science fiction/fantasy, and comedy. Favorite movies are V for Vendetta, Boondocks Saints, Kiss Kiss Bang Bang, and The Godfather.
Silent Night (2022) Adventure Time: Distant Lands (Blu-ray)