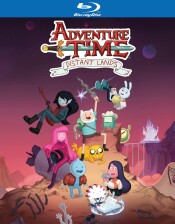 I’m going to go ahead and say that this limited series is only meant for the diehard fans of the original series. Those are the only people that I can see enjoying the show, based on the lack of context provided for newcomers. You are kind of just thrown into the mix without a real frame of reference for the characters or the central premise unless you already have some familiarity with the universe. Given that Adventure Time: Distant Lands was intended as a continuation of said series, that is fine. In fact, it is completely understandable. Barring extreme circumstances, there would be no reason for you jump to this four-episode limited series unless you were fond of the original format. However, I find myself in that said extreme circumstance, and as such without familiarity with the other series, I was pretty lost coming out of the gate. I am also not the intended audience for the show, but even my daughter failed to resonate with the series, as she walked out during the first episode.

The first special follows a robot called BMO, a character from the original series, I assume, as he attempts to travel to Mars. His journey is hijacked by a protocol droid that he affectionately names Olive, who takes him to a dying space station. Meeting up with a young scientist named Y5, BMO undertakes a quest to save the space station by retrieving a powerful gem from a dangerous jungle. This is the special that I could have really used some context for. As is, I felt like I needed a map. I was not emotionally invested in the series because I knew nothing about it, and no backstory is provided. I recognize the central theme of friendship and not deceiving others, but I just felt disconnected from it all. BMO also was not a strong enough presence to maintain my interest. I got bored.

Next up is Obsidian, which takes place in a glass kingdom and follows what I assume to be another character of the original franchise. As I said, this really wasn’t written for newcomers, as once again there is not much in the realm of backstory. This time around, Marceline the Vampire Queen attempts to protect the citizens of the Glass Kingdom from a dragon. It clearly is familiar with the kingdom, which comes with complications of its own as past conflicts arise and interfere with her mission. There were a few moments of interest during this one, namely the music, which I found to be somewhat catchy. However, for the most part this special ran into the same issues as the first; there was nothing to make me emotionally invest in the characters.

Together Again is unarguably my favorite of the four, as I was finally able to invest with the characters. How fitting it was that the characters I invested with were from what I gathered the primary characters of the series, Finn and his best friend/adopted brother, Jake. It is worth mentioning that Jake is actually a dog, and Jake has magical powers to change shape and size at will. I don’t know how a human and dog are going to be adopted brothers, but it is probably best not to look at the construct too closely. More on topic, this special deals with the topic of death, as the characters both find themselves in the afterlife. Finn spends most of his time attempting to locate Finn so that they can be reunited. It was the desire to be reunited with his best friend that I resonated with, as it spoke to a very basic human emotion.

Finally, there was Wizard City, which features Peppermint Butler as an inexperienced student at Wizard School to attempt to relearn magic. I’m a bit unclear as to what initially happened to her magic. Eventually strange happenings at school lead to Peppermint Butler falling under suspicion, and in order to clear his name, reclaiming his magical abilities. The mystery element of this one gives the overall story some intrigue. Even so, it wasn’t enough to maintain more than a passing interest.

In summation, if you are a fan of the original series, you will likely see Adventure Time Distant Lands as a welcomed and enjoyable continuation of your beloved franchise. However, for newcomers like myself, I urge you to go back to square one and find out if this series is really for you before trying to take in this expansion into the established universe, because without that foundation, you will likely find it as confusing as I did. Also, without that much-needed context, the characters aren’t likely to mean anything to you, and by extension neither will this limited series.

Jeremy Butler is a film school graduate of the International Academy of Design and Technology. He is been writing for Upcomingdiscs since 2012; however, movies have played a big part of his life for much longer. Favorite genres include horror, science fiction/fantasy, and comedy. Favorite movies are V for Vendetta, Boondocks Saints, Kiss Kiss Bang Bang, and The Godfather.
The Matrix Resurrections (UHD Blu-ray) (4K) The Godfather Trilogy (UHD Blu-ray) (4K)