Posted in: The Reel World by Brent Lorentson on March 25th, 2022 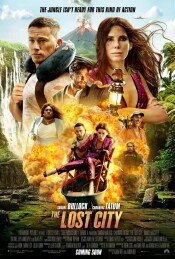 From the moment I saw the trailer for The Lost City, it immediately gave me vibes of Romancing the Stone and Jewel of the Nile, the adventure-romance films that starred Michael Douglas and Kathleen Turner back in the mid-eighties. The basic story for those films were simple: a romance writer who finds herself in an adventure to find a rare jewel alongside a handsome rogue with bad guys coming after them around every corner. I loved these films as a kid, and getting to see a modern twist on these stories is something I found welcome. What is even more welcome is getting to see Sandra Bullock back in a comedic role. I’ve been a fan of just about everything Bullock has done since she graced the screen in Demolition Man and then the following year in Speed. My only concern was seeing Channing Tatum as her co-star; while I like him in numerous supporting roles like Logan Lucky and Foxcatcher, he’s never really convinced me that he has what it takes for leading-man status. Well, that changed after seeing The Lost City, and my feeling about this film is that it’s the movie audiences don’t yet realize they needed, and I hope it becomes the box office success it deserves to be.

Loretta Sage (Bullock) is a successful romance novelist who is mourning the passing of her husband. She’s become a bit of a shut-in, and after struggling to finish her book “The Lost City of D” her manager Beth (Da’Vine Joy Randolph) has put together a book tour for Loretta and her cover model, Alan “Dash” (Tatum) to promote the book. Loretta seems to be content with giving up with her romance adventure series, though this could possibly mean an early retirement for Alan, who has embraced being a sex symbol for her readers wearing a ridiculous wig, acid-wash jeans, and a shirt that seems to have lost most of its buttons. Channing Tatum immediately stands out in this performance as he hams it up on stage for the adoring fans but is charming when he’s off stage trying to convince Loretta to not stop writing. It’s after the near-disastrous promo appearance where the plot escalates after Loretta is kidnapped and taken to see an eccentric billionaire, Abigail Fairfax (Daniel Radcliffe). Fairfax believes the island in Loretta’s new book is based off the island he has recently purchased and is in search of a lost city that contains a rare treasure.

The only issue I had with the casting of this film is Radcliffe as the villain. If this were a more serious and sinister kind of role, I believe it could have hurt the film, but because the film doesn’t take itself seriously, I can look past this odd casting choice. Let’s face it; even waving a gun around, it’s hard to believe the guy who played Harry Potter could be a convincing villain.

It’s when Alan decides to go rescue Loretta that the film really picks up steam. With the help of Jack Trainer (Brad Pitt), an ex-special-forces soldier, they take off into the jungle to rescue Loretta. While Pitt’s role is brief, he appears to be having a blast in this role. I think some might be disappointed that Pitt does have such a small part despite how it looks in the trailers, but I feel it is better because this really is the Loretta and Alan adventure.

What makes this film a little unique from the numerous movies that it draws its inspiration from is how they go about swapping gender roles. Sure, Loretta may at first seem the damsel in distress at the start, but she does take control and lead the way when it comes to finding the lost treasure as she finally gets to live out an adventure rather than write about it. Sure, Alan may be a dim-witted character, but it’s hard to not like him over the course of the film. The chemistry between Tatum and Bullock actually works well, and when the romance does inevitably occur, it’s something that an audience can get behind and want to see more of.

Something I didn’t expect is how funny this movie actually is. How long has it been since we’ve gotten a good comedy in theaters that just about everyone can enjoy? It has everything from witty dialogue to strong physical comedy that remains consistent from start to finish in the film. It’s because this movie keeps the laughs coming and keeps the audience engaged that I feel this is a movie that is going to have some staying power at the box office and also hold up with repeat viewings. I’ll even go so far as to say this is a film that shines because it’s an original property and will most likely get a sequel. Granted, writers and directors Aaron Nee and Adam Nee are going to be busy soon working on the new Masters of the Universe film.

I would have released this film a little closer to summer, because this very much has that summer movie feel, but this is also going to be a film that cashes in on the “girl’s night out” crowd. I’m happily surprised by how much I enjoyed this film, and it’s something I have no shame in admitting I look forward to watching it again. Watch out The Batman. I think this one is going to knock you out from the Number 1 spot this weekend.

Brent Lorentson is a horror writer and film critic based out of Tampa, Florida. With a BA in Digital Film, he co-wrote and co-directed Scavenger Hunt. His short stories have appeared in various horror anthologies. In 2019 his short script Fertile Blood will be a part of the anthology horror film Slumber Party. He is currently working on his first novel A Dark and Secret Place set to be released in late 2019. Favorite Films: Taxi Driver, Fight Club, I Saw the Devil, The Wild Bunch, Dawn of the Dead, A Clockwork Orange, Pulp Fiction, Heathers, The Monster Squad, and High Fidelity.
The Godfather Trilogy (UHD Blu-ray) (4K) Where There’s Life / Monsieur Beaucaire