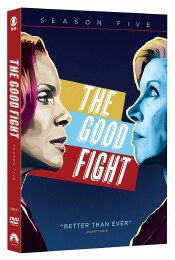 This season of the Paramount Plus long-running series did a bit of shaking up. For one, the series said goodbye to a main staple of the series with the departure Delroy Lindo’s Adrian Boseman. This departure came as a surprise, as he’d been with the series from its opening, and it wasn’t as if his character had been relegated in recent years. However, I suppose everything changes with time. Don’t imagine that it will be long before we see Delroy on the small or big screen again, as the actor already has four projects in production, including the MCU’s revamping of Blade (no confirmation on who he will be playing in the film, but my gut tells me Abraham Whistler). Now if the Lindo departure shocked you, brace yourselves, because he isn’t the only cast member who made their exit. Cush Jumbo, who’s played Lucca Quinn, is also saying goodbye. Lindo’s exit surprised me, but Jumbo’s floored me. Jumbo’s Lucca Quinn has been a significant part of the series, and with her gone, the show in a sense is losing the paradigm of the old lions vs the young wolves. Well, if you need a fix of Jumbo’s quiet presence, you can catch her on a Netflix adaptation of a Harlan Coben novel.

With Lindo and Jumbo gone, that means that the series will enter its fifth season with only four of its original cast members remaining. Fortunately, that is more than enough the preserve the wittiness that I’ve come to appreciate from this show. Much of this comes courtesy of Christine Baranski’s Diane Lockhart and Sarah Steele’s Marissa Gold. In the event that these two choose to leave the show, it will signify the end of the series. Or at least it will as far as I’m concerned. Luckily, there does not appear to be any danger of that, especially with Marissa’s decision to become a lawyer herself, somewhat filling the vacancy that was left by Lucca Quinn. This decision to pursue law herself essentially closes the book on the character’s occupational flightiness. Since the show’s inception, Marissa has worn multiple different hats including personal assistant and in-house private investigator. Long-term, I found this to be a fitting transition, and it puts an end to the conflicts that arose between her and private investigator mentor Jay, especially after last season showed her to have a higher salary than he. It also provides a good avenue and talking point between her and her father, whose long awaited cameo is expected to take place in the already announced Season 6.

In regards to Baranski’s Diane Lockhart, while I don’t anticipate her departure given that the show is basically centralized around her character, this season was not without complications for her in both her professional and personal life. These situations are divided between the first and second half of the season. First came the personal, when her and her husband’s (NCIS’s Gary Cole) political views, which are polar opposite, result in an inadvertent FBI investigation. In the second half, the power vacuum left behind by Adrian Boseman leaving the firm and the power struggle between Diane and Liz Reddick (Audra McDonald). Matters come to a head in Episode 6 (And the Two Partners Had a Fight…), after a workplace app which allows members of the firm to complain about the partners goes viral, with many of the complaints aimed at Diane. In this regard, I felt that Diane was being unjustly persecuted with many of the complaints having to do with her husband’s political views or her being a white partner at a black firm. Both of these things have very little to do with her professional, and yet a conflict arises between the two partners as a result. Racial issues have always been a big part of the series, and this is one of the few shows that addresses real-life issues in a manner in which all points are view are addressed. However, in this instance, I feel Diane gets the short end of the stick, especially given the reality that without her clients it is very likely that those complaining would have a job because the firm couldn’t afford the personal. Fortunately, Diane is not above playing this trump card. The situation is eventually resolved, but even so I still felt it was resolved unfairly. I will say that the character seems at peace with how things worked out, so that’s something.

When it comes to storylines, the show has also been a bit outlandish, but this season takes it to another level, with the establishment of a low-cost arbitration service in the back of a copy shop. Homeland’s Mandy Patinkin joins the show to act as the judge despite never going to law school or actually being appointed to the bench. Taking nothing away from Patinkin’s everyman character, the idea of this false court being taken seriously is a hard pill to swallow. If it were that simple, why wouldn’t everyone do it? That very idea is used as a funny trope for the season’s conclusion.

In summation, despite losing two impactful characters, The Good Fight remains a quality piece of television. Not completely surprising, seeing that this isn’t the first time that the show has lost members of the main cast. Luckily the show, like its predecessor, always has a steady stream of acting elites to appear as a recurring or guest stars. This season included the aforementioned Mandy Patinkin, as well as Jane Lynch, Margo Martindale, Wayne Brady, Tony Plana, Danny Pino, Stephen Lang, and Wanda Sykes, whom I am anticipating being moved up to series regular. I wonder who the series will feature next year.

Jeremy Butler is a film school graduate of the International Academy of Design and Technology. He is been writing for Upcomingdiscs since 2012; however, movies have played a big part of his life for much longer. Favorite genres include horror, science fiction/fantasy, and comedy. Favorite movies are V for Vendetta, Boondocks Saints, Kiss Kiss Bang Bang, and The Godfather.
Edgar G. Ulmer Sci-Fi Collection Doctor Strange in the Multiverse of Madness