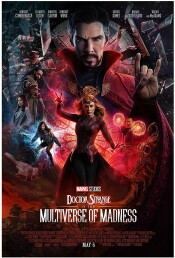 “You cannot control everything, Strange. You opened a doorway between universes, and we don’t know who or what will walk through it.”

The last time that director Sam Raimi played in the Marvel sandbox it was on the third of his own Spider-Man trilogy featuring Tobey Maguire in the webslinger’s role. Since then he’s kind of gone back to his horror roots and even returned to the Evil Dead franchise with a television series that continued the exploits of Bruce Williams as Ash. It’s only fitting that he would see both of these worlds collide in a perfect storm that allows him to once again recreate that old 4-color universe on the big screen with both a connection to Spider-Man and his horror roots. The result is the latest MCU (Marvel Cinematic Universe) that picks up right where Spider-Man: No Way Home left off. Of course, I’m talking about Doctor Strange In The Multiverse Of Madness. The story pretty much picks up where we left things in the recent Spidey adventure as well as picking up some threads dropped on the Disney + shows, most notably Wanda Vision. It’s a twisted nightmarish corner of the MCU that we haven’t truly explored to this extent before and the results might not come close to the wonderful ride we took recently with our friendly neighborhood Spider-Man but it’s a nice detour from the typical that also sets the stage for quite a few other surprises that I really won’t be able to tell you about… at least not yet.

Doctor Strange (Cumberbatch) has been having some vivid dreams about a young woman who has embarked on a twisted mission with some alter-ego of himself. He soon discovers it’s a bleed through from another universe and that the woman is real when he ends up rescuing her from a giant creature that tears up a few blocks of New York trying to capture her for some evil entity that is using the Dark Hold and hopes to steal her powers. It seems she has the ability to travel between these worlds but she doesn’t know how to control it. He turns to Wanda (Olsen) for help only to discover that she has been overtaken by the Dark Hold and is on a desperate quest to return to the children she remembers but never really had. For more on that story you’ll have to get into the Wanda Vision show or refer back to a series of comics where Wanda once destroyed the future of mutants also in search of these imaginary children. Strange must now protect America Chavez (Gomez) or the multiverse might be corrupted by an evil tyrant. With the help of old friend Wong (Wong) he takes an amazing journey through infinite possibilities in infinite combinations to save the girl and the multiverse.

Of course, there’s a lot more to this story but as Stan Lee used to say: “That would be telling” and I certainly don’t want to ruin some of the really sweet surprises that are waiting for you when you watch this movie. I can tell you that you’re going to get a sneak peek at what a couple of the future Marvel films might look like with some fun characters appearing for the first time in the MCU while there’s a wonderful tie-in to a franchise that we have yet to see in this series of films but know very well. Yeah it’s all so mysterious but admit it. You love being teased with that stuff. It’s one of the reasons you keep coming back and why this movie won’t disappoint. Again quoting Stan, The Man, “Nuff said”.

Sam Raimi gets to flex his horror strengths here more than we’ve seen in an MCU film before. There’s going to be a kind of zombie version of Dr. Strange with one of those images that reach out and grab you offering you a wonderful hybrid of a comic splash page with trademark Raimi iconic imagery here. And, of course Bruce Campbell makes his requisite cameo in a Sam Raimi film. The big surprise is Raimi’s brother doesn’t appear to have a small role in the film. There might end up being some make-up creature happens to be brother but I didn’t notice. You have to wait for about the last third of the film for the real horror elements to truly kick in. Yeah, there are monsters but we always have monsters. This is real undead action I’m talkin’ about. Be patient. Wait for it. You won’t be disappointed.

This has to be Cumberbatch’s best performance in the role. The first Strange film was good. Don’t get me wrong but Cumberbatch wasn’t really comfortable in the part. The parts with The Avengers were getting there and he was pretty good in Spider-Man: No Way Home. This is Cumberbatch completely in control of the character and getting to play Strange several different ways. He also has his best yet MCU screen chemistry with newcomer Xochitl Gomez as America Chavez. It’s my hope they keep these characters together for a while because they play so naturally off one another that she helps bring out this higher level Strange from Cumberbatch. Not that he needs the help but there’s a compelling dynamic between these actors and characters that I really loved. Elizabeth Olsen gets to have a try at playing Wanda more as The Scarlet Witch this time and you can tell she’s having a really good time getting to play evil for a change. I was a little concerned that she might not quite be able to pull that off but she’s a perfect choice as the big bad for so many reasons that it’s a special treat for fans of the actress and fans of the characters. I know you’re fans of both. Then you’ll be doubly satisfied.

Benedict Wong gets to play some of the comic relief as Wong and it’s so much fun watching him send out these little snipes about his being the Sorcerer Supreme. Also returning for a meatier part from the first film is Rachel McAdams as Christine. We get to see a kick-ass version of that character in another universe. Another example of some solid chemistry going on here.

I never doubted that the f/x would be awesome so I won’t spend a lot of time talking about them. We’ve come to expect that from even the lesser of these MCU films. They have the groundbreaking CGI down to a routine. What I like is how much characterization and solid emotional beats we’ve been getting again lately. The MCU is rebuilding the character base here and there are some huge boots to fill here and it was never going to be easy getting us to put aside the fallen stars and embrace these new players. The only way that works is if the films take the resources and give us heartful characters that we can care about. Otherwise it’s nothing and The Eternals, I think taught us that lesson well. Expect some of the MCU’s best cinematography blended seamlessly with CGI and populated by strong characters. That’s a formula for success every time. “Is ancient custom”.

Gino Sassani is a member of the Southeastern Film Critic's Association (SEFCA). He is a film and television critic based in Tampa, Florida. He's also the Senior Editor here at Upcomingdiscs. Gino started reviewing films in the early 1990's as a segment of his local television show Focus. He's an award-winning recording artist for Omega Records. Gino is currently working on his 8th album Merchants & Mercenaries. Gino took over Upcomingdiscs Dec 1, 2008. He works out of a home theater he calls The Reel World. Favorite films: The Godfather, The Godfather Part II, The Body Snatcher (Val Lewton film with Karloff and Lugosi, not the pod people film), Unforgiven, Gladiator, The Lion King, Jaws, Son Of Frankenstein, The Good, The Bad And The Ugly, and Monsters, Inc.
The Good Fight: Season Five Privilege (Blu-Ray)