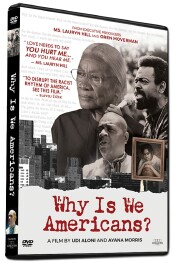 It took me a second to get past the title of this documentary. I had a feeling that it had some kind of significance, but without that context, all it was for me was grammatically incorrect. With that to start off, I have no problem admitting that I wasn’t really looking forward to reviewing this documentary. I know shouldn’t judge a book by its cover, but I was, and something about the title just rubbed me the wrong way. It felt ignorant. Now I must admit that I was actually the ignorant one given my lack of knowledge regarding the cultural significance of that title, the associated poem, as well as the prominent poet it came from, and the legacy of his prominent family. Why Is We Americans tells the story of the Baraka family, a family whose story is carved deep into the civil rights movement. It started with the family’s patriarch, Amiri Baraka (formerly known as LeRoi Jones), a poet/playwright/activist, as he shepherded his family through decades of social activism with poetry, music, and art. It’s told from multiple perspectives including Amiri himself along with his wife, Amina Baraka (formerly known as Sylvia Robinson), a prodigious activist herself. Most surprising was the perspective of Ms. Lauryn Hill of the Fugees. Seeing her took me by surprise, because I hadn’t expected anticipated seeing anyone that I would recognize.

Legacy is a key component of the documentary, as Amiri and Amina are far from the only members of their family who serve the community. Their son, Ras Baraka, currently serves as the mayor of Newark, New Jersey, and he is also prominently featured through the film to help illustrate his family’s legacy. Speaking of illustration, the film does that quite well through on-camera interviews while also interweaving archival footage of Amiri’s reciting his poetry. The most illuminating portion of the film came in the latter of the documentary with the sharing of the tragic murder of Amiri’s sister, Kimako. However, from my perspective, the part the hit the hardest was the homicide of Shani, Amiri and Amina’s daughter, and one of the first openly gay black activists. These portions are covered in rapidly succession, and it is impossible to be unaffected by both recaps.

Like the Baraka family, the documentary does not shy away from complex issues, and the major theme of the film is racial injustice, a big issue that still plagues our country to this day. It is something that is yet to be fully quantified, but in this format, told from the perspective of a family that has seen more than their fair share of injustice, it at least puts words to an issue that can’t be addressed enough. I identified with the subject matter, which is not much of a surprise given that I come from a similar background. And it is my belief that while people from another walk of life may not be about to empathize, after watching the documentary, there is no way they won’t be able to sympathize. I dare say I learned something, and I believe that was the film’s intent. There is power is this family’s story.

Jeremy Butler is a film school graduate of the International Academy of Design and Technology. He is been writing for Upcomingdiscs since 2012; however, movies have played a big part of his life for much longer. Favorite genres include horror, science fiction/fantasy, and comedy. Favorite movies are V for Vendetta, Boondocks Saints, Kiss Kiss Bang Bang, and The Godfather.
Privilege (Blu-Ray) Kin: Season 1