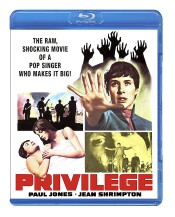 The narrator tells us that Steven Shorter (played by Paul Jones) is quite happy to be back in the UK after a successful American tour.  His adoring fans are being held back (well, most of them) from the pop singer.  He gives them the release they need from the state of the world and gives them an outlet for their emotion, which they gladly pour out for this musical icon.

Steven soon takes the stage for his first performance since being back home.  The performance is a violent act which starts off reminiscent of someone being in prison.  He is put in handcuffs, tossed over the side of the stage, and then locked into a cage before the music begins to start.  All of the women are beside themselves as they feel every bit of Steve’s torture as he yearns to be free of the cage that holds him.  Tears roll down some of the girl’s faces, and the entire crowd has an outpouring of emotion by the time the song has finished.

The singer leaves the stage and chaos erupts as the crowd rushes the police officers still on stage.  This is to divert the violence of youth and keep them away from politics, focusing on Steven Shorter.  After the performance, the press and “professional leaners” mob Steven, talking to him, gathering pictures, and asking for favors which his manager and handlers take care of.  We are introduced to a lovely young lady named Vanessa Ritchie (played by Jean Shrimpton), who has been hired to paint his portrait.

We soon are taken to a discotheque which plays nothing but Steven Shorter music in order to spread happiness through Britain.  Steven doesn’t care for the press or the limelight and asks Vanessa to dance.  The two dance, but they can feel everyone watching them.  However, soon Steven will encounter a change that will shake the very foundation of his soul and shift the fundamental way the public will think and act.  All because the government deems it to be.

I will admit upon the second that Paul Jones’ character of Steven Shorter takes the stage, there is a certain magnetism he brings to the movie.  All eyes are on him, and rightfully so, as any other character (except maybe Vanessa) takes a back seat.  Even though his words are few, his actions speak volumes, and he is every bit the enigmatic personality the movie needs.  Mostly because the rest of the film is about as dry as an Arizona desert in the middle of July.

The film obviously is making a political statement with the idea of conformity right down to the Nazi style armbands (but UK-symbolized instead) that makes their appearance towards the latter part of the film.  However, in the same breath it forgot to make this film entertaining even at its last scene.  The film drags everyone down who is watching the film, and just when you think the movie is getting exciting and we are going to have a real climax, it peters out without a whimper into the final credits.

Furthermore, the supporting cast can’t do hardly anything without Paul Jones/Steven Shorter, so there is not much reason to watch anyway.  Jean Shrimpton, while pretty, doesn’t really do anything else that holds our eye.  I cannot be bothered to even look up the names of the public relations rep or the financial backer from the film, because they literally could have been played by just about anybody with a SAG card.

This movie is filmed in a 1.85:1 widescreen format.  Unfortunately, while this film is probably the best it has ever looked, the stock is a little soft here.  No issues with the grain, but age is very apparent, as the color feels very stagnant and sharpness can often be muted or muddled.  It’s hard to discount the overall presentation, as I’m sure most fans of this movie will really appreciate the work here.

But it’s not going to be something that one is really wowed by.  The only interesting thing which I don’t think was probably revealed prior to the Blu-ray copy was the really hokey expressions of the police officers from the first song.  Come on, man, sell the performance, for pete’s sake.  Of course, that’s not the last time I would question the acting performances in this film, but I digress.

The sound to this film is presented in DTS HD 2.0 Master Audio in English and also has English SDH subtitles.  The dialog and the music are very clear here, and there should be no issues with the British accents at all.  I did find, though, that the audio quality felt a bit hollow and sometimes soft.  I can understand everything just fine, but it’s not very rich, if that makes sense.  Sound effects fare a little better, and the music does its best to heighten the tension at the right moments.  I did not have any issues with the subtitles either.

Audio Commentary by Filmmaker/Historian Daniel Kremer: A pretty good commentary, and for once I didn’t feel it was overly dry like a lot of these I have listened to lately.  Daniel does a good job and shares plenty of facts and social aspects from the film.  One interesting point from the latter part of the commentary is when he goes into reviews of the movie from the time.  At least I know I’m not alone in my analysis.  Suffice to say, if you do like the film, you’ll find it even more entertaining.

In almost every description of this film I can find, they describe it as a satirical comedy.  Perhaps back in the 1960’s with its handling of the commercial music scene, it could be seen as satire, but far from comedic.  This film really works as a warning to the music industry when it comes to government intervention.  It’s chilling and even a little frightening to see the speed with which people are dealt with when they deviate from what is expected.  Maybe that’s why I had problems with it, not because I expected a happy ending, but an ending with purpose.  Instead, by the end it felt as if nothing was accomplished, and the machine is chugging down the track.

The discs’ release felt like it was handled with care as the video and audio are more than adequate.   Furthermore, to get someone to do the commentary who really had the knowledge to do so was welcome for a film like this.  In the end, I just did not feel that I could ever enjoy the movie even with the extra knowledge gained from this disc presentation (and my own research to do this review).  Many people will consider this a cult classic, but for me, it’s a rental at best.  Enjoy.

Michael Durr has been reviewing movies for the better part of fifteen years now. He primarily enjoys thrillers, sci-fi, animation and even a little courtroom drama. His favorite films include Escape from New York, the Goonies and anything with Alyssa Milano. When he’s not praising Kurt Russell as the greatest actor of our time or scratching his head over a David Lynch flick, he’s spending time at home in Texas with his lovely wife, Lori and his amazing son. How they put up with him is a mystery, but even Basil Rathbone doesn’t have the time to solve that one.
Doctor Strange in the Multiverse of Madness Why Is We Americans?