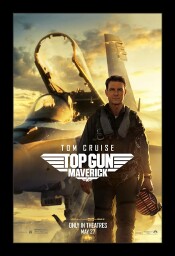 It has been about 36 years since the release of the first Top Gun. This is one of my earliest memories as a kid, seeing the movie on the big screen with my parents at the old Main Street 6 Cinemas. I was a bit obsessed with this movie growing up. I had a copy of the film that I had recorded off of Showtime, and over the years I’d imagine I’ve seen Top Gun at least 100 times. I was obsessed with the movie and its soundtrack. Kenny Loggins and “Danger Zone” lived rent-free in my head throughout my childhood.  I know I’m not alone on this when saying just how much Top Gun is a movie I just love. It’s not perfect, but I just can’t find anything I dislike about it. Even in my forties, I look at this film as comfort food. It doesn’t matter the time or day, if it’s on, I can’t help but sit down and watch it. I’m putting this out there because, yeah, when I heard the talk of them first doing a sequel, I was excited, but I wasn’t too optimistic. Then when Tony Scott died in 2012, I thought for sure that was the nail in the coffin for any potential new Top Gun film. Ten years later, after over two years of delays, Top Gun: Maverick is finally hitting the big screen. After all these years and all the hype, is it worth the wait?

In case you haven’t realized it, Hollywood has been riding the wave of nostalgia for a while now. Just this week alone, Disney Pus is debuting the Obi-Wan Kenobi series, Netflix is releasing the new season of Stranger Things (that alone is borderline 80s nostalgia porn at its best), and then we have Top Gun: Maverick. This week is simply old-school pop-culture-on-steroids week, and a reminder of why it’s a good time to be alive as a cinephile. It’s important to keep all this in mind, because when you go in to the theaters to see Top Gun: Maverick, you are not just simply getting to see a new movie, but it’s also a nostalgic trip back to the first film that will leave you excited and at times maybe a little misty-eyed reuniting with these characters we first met so many years ago.

Capt. Pete “Maverick” Mitchell (Tom Cruise) has stuck with the Navy after all these years. It shouldn’t come as a surprise he still has his issues with authority, but is still considered one of the Navy’s elite pilots. When we catch up with him, he’s now a test pilot with a program testing out new jets, though the program is on shaky ground so much so that the program is on the verge of being shut down to put more attention on drone programs. Maverick knows the importance of his “test flight” and that it needs to be a success, so as is expected, he ignores orders and takes that multi-million dollar jet and pushes it to its limit.

While Maverick may have a few decades of service behind him, he hasn’t really changed much, so much so to the point he still has his trademark jacket and the same style motorcycle (only a slightly newer model) as he did in the first film. When he’s given orders to go to Top Gun and train new pilots, it’s for different reasons. This time it’s to train a new batch of pilots to pull off a new impossible mission to take out a uranium enrichment plant.

It’s at this point in the film we meet two “new” characters who have some ties back to the first film. Penny (Jennifer Connelly) is an on-again-off-again love interest for Pete, who runs a bar that all those from the base visit. She’s only mentioned by name in the first film. If you are still scratching your head, she’s brought up by Goose’s wife just before the “Great Balls of Fire” scene.

The relationship between Pete and Penny is very different from the Pete and Charlie romance of the first film. The first film was more lust-driven, whereas what Pete has with Penny is more mature, though it seems timing hasn’t ever been right for them. Penny has grown up with the military, and she knows better than to get her hopes up, but it seems Pete is finally ready to settle down. I love how subtle Connelly plays this role. She doesn’t have any big dramatic moments, but she shines in every moment the camera is on her. Then we have Lt. Bradley “Rooster” Bradshaw (Miles Teller), the son of “Goose”. This was some impressive casting. It’s easy to believe Teller could have been the cinema child of Anthony Edwards, especially when it comes to a scene in the bar when “Rooster” pulls up to the piano to sing a tune. This is a great moment in the film that sure, it’s familiar to the first film, but it has so much more meaning this time around, and when you see the reaction Cruise gives through a window during this performance, it speaks volumes. There is immediate tension between “Maverick” and “Rooster”, and it’s not just because he blames “Maverick” for his father’s death. That there is so much emotion between these two, both spoken and unspoken, is part of what elevates this film from your typical summer action film.  These scenes are a stark reminder that their actions in the air have long-lasting consequences that impact many.

As for the training, we meet new recruits. There’s “Hangman” (Glen Powell), who is jockeying for team leader for the mission. The rivalry between “Rooster” and “Hangman” is a bit like the one between “Maverick” and “Iceman”, but simply nowhere near as memorable. There’s also “Phoenix” (Monica Barbaro) and “Bob” (Lewis Pullman), who are some of the more memorable standouts from the team. Maybe newer audiences will gravitate to the other pilots, and maybe over time they’ll make more of an impression, but to be honest, I barely remember the others. It’s fun, though, seeing the new recruits try to outmaneuver Maverick in the air; these moments are what we’re in the seats for and why seeing this movie on IMAX or at least in Dolby is what makes this experience worthwhile. Knowing they shot over 800 hours worth of aerial footage to get all these sequences shot is what takes this film to another level. Knowing that YES that is Tom Cruise flying in those jets, knowing that there is little to no green screen when everyone is in the air, that the cast had to go through intense aerial training so they could handle the high G-force, this is what makes this film an experience worth having on the biggest screen you can get your eyes in front of.

When you watch Top Gun and then see Top Gun: Maverick, it’s incredible to see the journey Tom Cruise has taken over all these years.  He’s grown to be a megastar and an accomplished actor. What he does with his character of Pete Mitchell is something I don’t think would have been as impressive if we got this sequel in the 80s or the 90s.  Over the years, the man has learned to perform without speaking a line, and even more impressive is how he’s jumped into doing his own stunts. This gets me to Val Kilmer and his appearance as “Iceman”. The moments between the characters of “Maverick” and “Iceman” are sparse, but they sure do have an emotional wallop. That’s all I’ll say about that, but it makes me wonder what we could have had if this movie was shot ten or twenty years sooner.

It’s a real shame we lost Tony Scott, and we never got to see his vision for the sequel, but director Joseph Kosinski (Oblivion and Tron Legacy) really stepped up and delivered a film that looks and feels just like a film Tony Scott would have directed. Few directors could set aside their egos to do that, but the film is so much better for it. One example that stands out to me is when we see the recruits playing their brand of football on the beach as the sun is setting in the background. Scott had a particular way of shooting a sunset I’ve never seen replicated, and seeing it replicated in this film was a simple and great moment of many in the film.

Having some of the score from the first film and a brief moment where we do get to hear “Danger Zone” play early in the film are moments that definitely work as a connective tissue to the first film, but how can a film compete with that epic soundtrack from 36 years ago?  It can’t, and it doesn’t. Sure, the film has some great classic songs, but it is missing that Kenny Loggins voice that dominated the first film. Thankfully, they don’t even attempt to emulate a song like Berlin’s “Take My Breath Away”. What we do get is a closing credits number from Lady Gaga ,“Hold My Hand” that tries hard to be memorable but honestly doesn’t hold a candle to anything off the 1986 soundtrack.

So back to my original question. Was it worth the wait?  Hell yes, it was. I was skeptical, but I had a good time with this one. Sure, it gets a bit predictable, but those last 25 minutes are what going to the movies is all about. Marvel has had too much time controlling the box office with an overindulgence of CGI, Top Gun: Maverick gives audiences something to genuinely marvel over. While I seriously doubt this will get any attention come awards time, this film is simply as good as it gets when it comes to a big-time box office experience where you can clap and cheer and have a good time.  This movie officially kicks off summer, and I hope it’s the success it deserves to be.

Brent Lorentson is a horror writer and film critic based out of Tampa, Florida. With a BA in Digital Film, he co-wrote and co-directed Scavenger Hunt. His short stories have appeared in various horror anthologies. In 2019 his short script Fertile Blood will be a part of the anthology horror film Slumber Party. He is currently working on his first novel A Dark and Secret Place set to be released in late 2019. Favorite Films: Taxi Driver, Fight Club, I Saw the Devil, The Wild Bunch, Dawn of the Dead, A Clockwork Orange, Pulp Fiction, Heathers, The Monster Squad, and High Fidelity.
Batman, The (UHD Blu-ray) (4K) Lucifer: The Complete Fifth Season