Posted in: No Huddle by Brent Lorentson on June 2nd, 2022 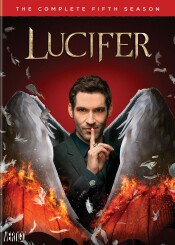 When I heard Fox had cancelled Lucifer after Season 3 and Netflix had picked up the show, I have to admit I got excited about the possibilities. I had hoped that the transition from network TV to the streaming service would mean the show could get away with more, because the show wouldn’t be bound to network rating guidelines. As it turns out, the show still has its TV-14 rating, but on the bright side the episodes are longer now, which in my opinion is a good thing. When Netflix picked up the show, they had announced that Season 5 would be the last season of the show. While the show does take some major storyline leaps as ways to wrap things up, thankfully things don’t come to an end just yet, as a Season 6 was produced and is currently airing on the streaming service.

The journey of Lucifer Morningstar (Tom Ellis) has been an entertaining one over the years. Season 5 has actor Tom Ellis, doing double duty playing Lucifer’s twin brother, Michael. The two have a bitter rivalry, and their feud is the major arc of Season 5. All the angels have their own unique gifts and powers. Lucifer is able to have people confess their innermost desires, while Michael has a far more sinister power, one that allows him to actualize a person’s innermost fear. Power also seems to be a theme of this season as well; we see characters lose their powers, other characters gain powers, and then there is the major arc of the season: who will become the most powerful being in the universe when God (Dennis Haysbert) decides it may be time for him to retire.

These are some major storylines that go on over the course of this 16-episode season, and it really feels as if those these storylines are leading to the eventual end of the series, but there is a lot more in the side-story department to keep fans entertained. This season we get a fun B&W 50s-style detective episode, an episode filled with song and dance numbers, and then one that showcases one of Lucifer’s most over-the-top, outlandish pranks. This really is a fun season that caters to the fans who have stuck around from the beginning.

I’m relieved that the show has finally committed to the relationship between Chloe Decker (Lauren German) and Lucifer, but my one major complaint is that they write this relationship too “normal”. It’s a missed opportunity, but there are some highlights. It’s when Chloe discovers that she is a “Gift” that things get interesting, but sadly this storyline just really goes nowhere, to the point I nearly forgot about it towards the end of the season. The meaning behind her being a “Gift” I won’t get into, because it does somewhat go into spoiler territory, but I found this to be one storyline that had so much potential, but it simply falls apart.

Then there is Amenadiel (D.B. Woodside), Lucifer’s brother, who is adjusting to life on Earth and is now a father. Seeing him and Linda (Rachel Harris) raising their child is fun, but again, this becomes a missed opportunity when they realize the baby doesn’t have any celestial powers and is a normal human. That’s somewhat a theme of this season, how they try to make the point that being human, without powers, and having a soul is so much better than being immortal. Even God spends some time as a human, with some hilarious results (still amused by the sequence when God experiences a brain freeze for the first time). Even Mazikeen (Lesley-Ann Brandt) has her own crisis of wanting a soul so she can have a meaningful relationship. I still find this amusing, considering her how strong her passion is for inflicting pain on people and how badly she wants to return to hell.

The character who seems to get the most attention and an interesting arc is Detective Dan Espinoza (Kevin Alejandro). Of all the characters in the series, he always seems to get the bum end of things. While that doesn’t change this season, we do get to see more of him, and Episode 12 Daniel Espinoza: Naked and Afraid is definitely one of the more memorable episodes simply for how over-the-top things get. The episode it set up easily enough, with Daniel volunteering to be an escort for inmate transfer, and things just go off the rails in the worst way for the detective.

Another standout episode is the musical episode that honestly has changed how I view song and dance numbers in music and TV. The episode is Bloody Celestial Karaoke Jam. Basically, God seems to enjoy making people sing and dance for his own amusement. The opening number has Lucifer doing his rendition of ‘Wicked Games” by Chris Isaak. Tom Ellis gives an impressive performance in this scene. Then there is Another One Bites the Dust”that is over-the-top down to dead bodies reanimating to dance. It’s a fun episode that embraces the absurdity of its storyline.

There is a mini story arc this season that stretches a few episodes that revolves around a serial killer. What’s frustrating is that these episodes are really good, but when the killer is caught, well, it’s a bit underwhelming. It really is disappointing, because we get everything from seeing Lucifer physically at his most vulnerable, and we see the team have to investigate something darker that isn’t simply a crime of passion. We get to see the real evil that humans can be capable of. While I’m on the topic of storylines that get a nice buildup with no payoff, Ella Lopez (Aimee Garcia), who is the forensic specialist and the only one of the main cast that doesn’t know Lucifer is the real devil, is struggling this season about “having a real darkness inside her”. They treat this almost like a tease that maybe she’ll turn evil or do something really bad, but again, this goes nowhere. I love the Ella character and think this could have been an interesting direction to take this character, especially because her faith means so much to her, but sadly, it simply gets brushed off.

The show is definitely just looking to entertain, it’s a bit redundant where cases seem to have parallel themes as the characters in their personal life, but the show has never tried to be something it’s not. This isn’t a show trying to win awards, it’s a show just wanting to entertain viewers for an hour and inject a little moral subtext every once in a while and offer some interesting thoughts on faith. It’s a fun guilty pleasure that delivers a fun variety of characters, and it’s fun seeing these Old Testament characters interact in these “real world” settings. And for amusement’s sake, it answers the question, “Why does everything taste like chicken?” With one more season to go, I’m curious to see how it all ends. Will it be with fire and brimstone, or will it all end happily ever after?

Brent Lorentson is a horror writer and film critic based out of Tampa, Florida. With a BA in Digital Film, he co-wrote and co-directed Scavenger Hunt. His short stories have appeared in various horror anthologies. In 2019 his short script Fertile Blood will be a part of the anthology horror film Slumber Party. He is currently working on his first novel A Dark and Secret Place set to be released in late 2019. Favorite Films: Taxi Driver, Fight Club, I Saw the Devil, The Wild Bunch, Dawn of the Dead, A Clockwork Orange, Pulp Fiction, Heathers, The Monster Squad, and High Fidelity.
Top Gun Maverick Paramount Presents: The Man Who Shot Liberty Valance (UHD Blu-ray) (4K)